Diversity. If I were to ask you what this work means, I could easily get enough answers that it would by synonymous with the words actual definition. Diversity.com defines the word as follows: The  inclusion of individuals representing more than one national origin, color, religion, socioeconomic stratum, sexual orientation, etc.. Other words synonymous with Diversity are; difference, unlikeliness, variety, multiformity.  For the sake of this article, we’ll focus on diversity in comics and the media they spawn.

I think a brief recap of the life cycle of comics as a genre is in order to better understand where we were as far as diversity goes, where we are, and ultimately… where we need to be.  Comic Books as an art form is a very old one. Beginning in collections of panels and strips, to compiled panels and strips in the collection of a book.  Although technically, the first iteration of the comic dates back to 1837(it was titled “The Adventures of Obidiah Oldbuck”), first published in Europe before being reprinted and distributed in multiple countries.  Jump forward almost 100 years to 1929, we see a familiar sailor who eats the vegetable Spinach to gain strength in order to face his nemesis Bluto for the attention of his sweetheart Olive Oil, Popeye was born.

Jump again to the mid 30’s when the super sleuth Dick Tracy comes on the scene. It wasn’t until the late 30’s that the first official “super” heroes were introduced. A lone survivor from another planet who gained fabulous powers from the effects of our yellow sun, and a millionaire who’s parents were murdered in a dark alley, who grew up and used his money to develop a belt full of super tricks and gadgets to help aid him in his fight against crime…Superman and Batman are created.  Very few minority characters were in play at this time, and the ones that were, were used sparingly.  It wasn’t until 1966, where The Black Panther, an African prince with heightened strength, speed, and senses makes his debut in the pages of Marvel Comics title The Fantastic Four.  There were a few others across the landscape, namely The Falcon(friend to Captain America), Brother Voodoo, etc…but still, used scarcely. The Falcon

At this time, the big 2 companies(Marvel, DC) were growing.  Between the early 30’s to the late 60’s, these companies mirrored the times they were created in.  Most Artist, Writers, and Editors were Caucasian males.  There was little room for minorities or female talent. Most were Christian, some were Jewish, but almost all fit the same mold…Caucasian male, between the ages of 18-65.  Naturally, these men created what was familiar to them, heroes and villains that for the most part, they could identify with. The rare chance a minority was used, often it was in a stereotypical way.  Comic books as a genre really took a leap in the late 80’s to early 90’s, the popularity grew so much, the medium expanded.  Live action TV shows, films, cartoons, toys, of these heroes and villains were everywhere, but…there was something missing. 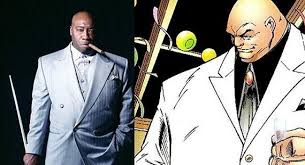 Although the Comic Book medium had grown exponentially, an accurate representation of the fan base  had not. More and more, fans from different racial, age, religious, sexual orientations, etc. were being left out of the medium they loved so much.  Yet still, more and more fans jumped on board, but the lack of representation was becoming grossly obvious. In an attempt to appease some of the fans, and further capitalize on the cash being spent, the companies started doing something different…they would now start changing some of their characters to match their fan base. They were still characters that weren’t used much, but in the stories more. This…would cause a problem.

Some of the fans were outraged, causing them to say things like the companies were “selling out,”  “pandering to the politically correct,” or “why not just create new characters instead of changing the old ones.” Herein lies the problem. How do you do what’s right by turning the Comic Book medium into a more inclusive one, without creating chaos with fans who love tradition and want the status quot to stay the same? The truth is, there is no definitive answer.  Comic Books are easily 75 years old give or take a decade, and with that age, a certain degree of acceptance must come with the fact that these creators did what was natural at the time.  But like all things, in time, they change.  One might say, had the industry been more in the beginning, there would be no need to retroactively change these characters today to create more diversity.  And the answer can’t be just”create characters” either.  The problem with that line of thought is no one cares about a “new character” enough for the stories to mean anything. Kill a new characters girlfriend, make their lover the same sex, etc. doesn’t hold the same weight…there’s no collateral built in a new character, the story loses it’s power. So, what should we do? 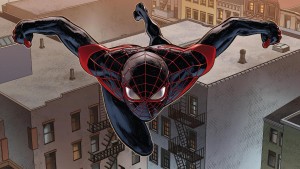 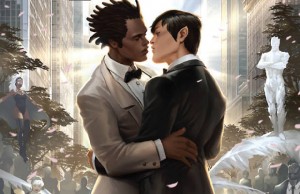 Only when the industries work force closer reflects the fan base, more women, ethnicities, sexual orientations, religious doctrines, etc. will there be more diversity, more inclusive environments where there won’t be a need to change characters to reflect a fan base that was previously left out.  It won’t happen overnight, but happen it must.  The world is a different place than it was 75 years ago, it’s high time this medium start to better reflect it to it’s fan base who so loyally love and support it.