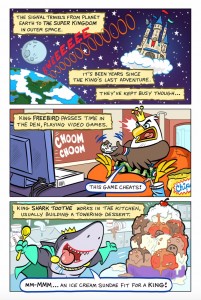 If you miss Saturday morning cartoons that delivered unapologetic silliness and action, here’s a comic for you. Created by writer/artist Scoot McMahon and Corey Barba, the Mighty Super Kingz are a trio of animal kings who live in a castle that orbits Earth and fight evil whenever it rises somewhere in the galaxy.

The story immediately gives us a sense of history, revealing that the three have protected the galaxy for some time and also haven’t been on Earth for a while. In fact, they seem to not have a lot going on anymore, killing time as best they can. But an old friend calls them back into action when Grand City is attacked by villains.

It’s a fun tale that gives you a quick feel for all the characters. Even the villains wind up being a little more complicated than you’d guess at first, with interpersonal drama cropping up very quickly. In fact, I wish we’d gotten a bit more out of the villains. The evil Gorlock seems charmingly ill-equipped to carry out his grand evil schemes and his eager assistant Deacon is quite adorable. 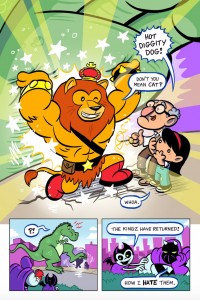 King Freebird (an eagle), King Sharktoothie (a shark) and King Zobiac (a lion) are all fun characters who make their personality known very quickly. Their new friend Lilly is a great help to the adventure and isn’t just a girl they need to rescue. I’m hoping we get to see other female characters crop up in the series as it goes on (perhaps there’s a Mighty Super Queen or two out in the vast galaxy).

Though this is a single, quick story, it leaves you knowing that there’s a lot more to explore with the Kingz, especially now that a new ally comes into their lives. I for one am happily looking forward to what’s next and recommend this for kids and anyone else who just wants some fun and laughter.