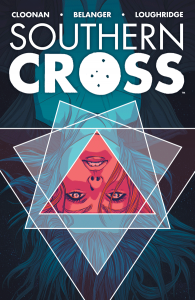 If there is anything that Image Comics has no shortage of its sci-fi books. The Indie publishing giant has become somewhat predictable with its output in recent years with titles like Black Science, Saga, and Manhattan Projects among many others. With so much in the genre being produced by their publisher the creative team behind Southern Cross is posed with a difficult task to stand out among so many high quality books. It’s to their credit then, that Becky Cloonan and Andy Belanger manage to create something very special in the first volume of their book and have created something distinctive and unique.

The story begins with the protagonist, Alex Braith, boarding the Southern Cross. The Southern Cross is a spaceship that is an industrial freighter, it runs a shuttle route to a mining planet called Titan. Alex is collecting the belongings of her recently deceased sister on Titan, who died under murky circumstances. Once aboard the ship Alex finds herself bunking with another woman who soon goes missing. As she reports the disappearance to Captain Mori and his crew, she quickly begins to learn that many aboard the ship have ulterior motives and dark secrets. In the midst of this manhunt the ship is experiencing constant mechanical problems due to a new engine called ‘the gravity drive’, which can have negative effects on passengers and crew. Through the course of the story Alex experiences hallucinations and inexplicable phenomenon, pushing her to dig deeper into the mystery surrounding her sister’s death.

Cloonan is no stranger to the horror genre, and with her ‘By Chance or Providence’ series of shorts as well as her graphic novel adaptation of Dracula, as well as her contribution to the anthology story Pixu, she has honed her storytelling skills in the genre. Southern Cross is a sci-fi gothic horror that delves into the psychological as well as the supernatural. The setting is reminiscent of films like Event Horizon and Alien but the story feels like a sort of twisted lovecraftian version of Murder on the Orient Express. If there were a nit to pick about the book so far it’d be that I found the characters difficult to really get invested in, though with the kind of multi layered mystery the book lays out in a relatively short time it’s easy to forgive. Andy Belanger’s art compliments the story in this book quite well. Those familiar with Belanger’s work on books like Kill Shakespeare or Swamp Thing are likely familiar with his distinctive style. One of the great strengths of the art in the book is the level of detail the environments have, giving the atmosphere of the ship a claustrophobic and cluttered feel. The character designs have a kind of utilitarian industrial look reminiscent of films like Alien but with a sort of flair that sets it apart. Captain Mori is a particular stand out with his outfit making him look like a modernized maritime captain, think space Ahab (spahab?). I would be remiss if I didn’t mention the color work by Lee Loughridge as well. The colors in Southern Cross are atmospheric and very effective. The cool color palette and sickly green hues make the entire setting feel squalid and uncomfortable.

There is a lot going on in this book that is definitely working. The first volume ends with a cliffhanger that leaves a lot of questions unanswered, and I for one am eager to find out what those answers are. For those who enjoy grungy sci-fi and gothic horror this will likely scratch an itch that there really isn’t a ton of content around for. With Image’s very accessible $9.99 price tag on the first trade, fans of those genres could do a lot worse than to drop ten bucks on this book.

Follow
Eric is a writer and freelance film professional. He studied Television Writing and Producing at Humber College and lives in Toronto, ON.