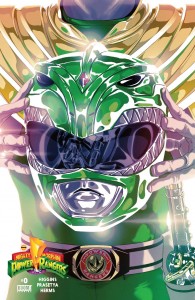 Children of the 80s may have had a rich cornucopia of Saturday morning pop-culture pleasantries–Voltron, Thundercats, GI Joe, Teenage Mutant Ninja Turtles, He-Man, etc.–but we 90s kids had Mighty Morphin’ Power Rangers and that’s all we needed. When it debuted in 1993, MMPR hit big with me as an impressionable eight-year-old. I chalk it up less to my discerning tastes at that age and more to the winning formula that MMPR presented: if giant robots and giant monsters are both awesome on their own, then giant robots fighting giant monsters must be more awesome. And for 155 episodes, it was. It’s hard to imagine the show ended two decades ago now, but reading through the new Mighty Morphin’ Power Rangers #0, I was instantly brought back to the heyday of my beloved early 90s craze.

Writer Kyle Higgins chooses to focus this issue on Tommy Oliver, the Green Ranger, in the days after he has broken free of the evil Rita Repulsa’s mind-control over him. Tommy’s defection from dastardly villain to troubled hero was a significant focal point of the show, a storyline that is seamlessly tapped into here by Higgins. I could see this issue easily being an episode of the show, one that would have followed the epic “Green With Evil” five-parter. Although this is a contemporary take on these characters, much of what grounds the story in modern times is kept to an absolute minimum: the kids all have cell phones and “push notifications” are mentioned (by Billy of course!) but that’s about it. Overall the dialogue feels timeless, not out-of-place in the modern setting but still comfortable to us original show purists. From the moment Rita Repulsa spoke in this issue, I could immediately hear the high-pitch screeches from actress Barbara Goodson. That’s a good thing.

Of course, it helps matters even more that Hendry Prasetya’s art is exactly what one would want in a MMPR comic. His spot-on depiction of Rita Repulsa from the opening pages on helps to create a wonderful wave of nostalgia, and when the Rangers are shown in their full costumes, those sequences equally shine as well. Outside the costumes, the look of the individual Rangers carry a modern twinge, but aren’t as memorable and in certain panels can appear very nondescript. It’s not a major determent to the issue but merely a nitpick that will always exist whenever any artist tries to translate a live-action property to a drawn medium.

What does hurt the issue, though, is that it is disappointingly short, something I suppose comes with the territory of these #0 issues. Only half of this book is the main story while the other half is reserved for two back-up stories, one written by Steve Orlando with art by Corin Howell and the other written by Mairghread Scott with art by Daniel Bayliss. Their stories are fine, but are abrupt tonal shifts from Higgins’ story of Tommy being haunted by his past. That’s not to say I didn’t smile a few times reading Orlando’s comic-strip-esque Bulk and Skull adventure, and Scott’s backup shows how formidable the Power Rangers can be when they’re all on the same page. But what stings the most when reaching the end of Higgins’ story is finding out the first issue is two long months away.

BUY THIS BOOK! You know, as long as you have an affinity for the Mighty Morphin’ Power Rangers that is. While I could see someone without any knowledge of the show picking this up and enjoying it on a base level, the typical backstory present in introductory issues is nowhere to be found here. But for those that watched every episode, had all the toys, and were generally swept up in MMPR mania, this comic may awaken that 20-years-younger child within you.