The hit TV show Agents of S.H.I.E.L.D. is currently on it’s third season and has been gaining traction and popularity with each season. So much so that we finally have a new comic book inspired by the TV show. I don’t know about you, but I happen to love Agents of S.H.I.E.L.D. and was super excited to find out that there would be a comic book coming out with all of my favorite characters. This just begged one question, will the comic book live up to the hype and the high bar set by the TV show?

Issue one starts off with a bang by having somebody in an Iron Man suit breaking into the Pentagon. It then thrusts us right into the world of the TV show with all your favorite characters, including a couple that were unexpected for me. One being the one and only Tony Stark, who is trying to find out who stole one of his suits and why they broke into the Pentagon. Most of the issue revolves around Tony and the S.H.I.E.L.D. team trying to solve this mystery. 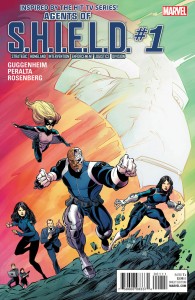 eim is a veteran in the writing game and does a great job adapting S.H.I.E.L.D. into this comic. It definitely has a very cinematic feel to and you can tell that Guggenheim loves writing action. And he does it well. My only real gripe with the book is that it seemed to move a little too fast. Some of the dialogue felt a bit rushed and it took away from the book some for me.

German Peralta hits an absolute home run with the art in this book, and honestly it’s one of the main reasons I enjoyed it so much. The way he captured the emotion and personalities of characters such as Agent May, Coulson, and Fitz was great. The colors by Rosenberg are also gorgeous and really helps to bring these characters to life. If nothing else read this book for the art.

The Verdict: Give it a chance. Overall it was a pretty solid first issue. There were some things I wasn’t crazy about, but the twist at the end of issue one has me really intrigued and on board for what’s to come. And the art was beautiful in this book. Fans of the show will love it! I’d give it a solid 4 out of 5.