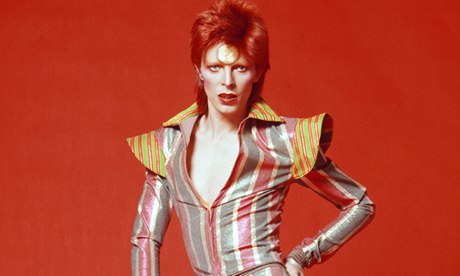 Ziggy Stardust. Major Tom. The Man Who Fell to Earth. The Thin White Duke. The Goblin King. He had so many names and faces, that I think what hurts so much for me right now is knowing we won’t be seeing any more.

He was, in my mind, the most important musician of the latter half of the 20th century. Apart from that, a hell of an actor. Even further? An impressive painter and a frustrating mime (He talked, you see. Mimes aren’t supposed to do that). Someone not only constantly reinventing himself, but striving to create original and inspiring works of art in every act of his public life. In that regard, he succeeded far more than he failed. Even something as mundane as a radio interview, he knew, was a performance.

With a public life that lasted from 1962-2016, Bowie’s career was long and varied. He sang about sexuality, gender, politics, God, love, aliens, fashion, lawn gnomes, dancing, and death. Although his interests and outlooks changed over that timespan (whose wouldn’t?), songs from any Bowie era always struck me as coming from somewhere pure and honest, with a genuinely funny wit that was apparent in the smirk that always seemed to find its way onto his face when he started speaking. Apart from maybe a brief period in the late 80s, I really don’t believe he ever wrote a song to sell a record. They always came from somewhere interesting, at the very least.

And for the most part? These songs rocked! Who can forget that guitar riff that opens Ziggy Stardust? The beat behind Sound and Vision? Rebel Rebel! Golden Years! Fashion! (Beep Beep) I’m Afraid of Americans!? Space. Oddity. The way his voice sounded like NO ONE else’s, even after 50 YEARS of music!

We didn’t even get five years warning.

I’ve been a serious Bowie fan since high school. Where we all discover him. I’m the type of fan that’s heard it all. That scours the internet for alternate takes and demos, just to hear a line I’ve heard him sing over and over again sung just a little bit differently. Or find a multi-track that reveals he called the sound the stylophone made on Space Oddity a “little mouse fart”. The most annoying kind of fan, I know. I know. I’ve listened to The Laughing Gnome more times than is healthy for a regular human being, and the news of David Bowie’s passing has hit me harder tonight than anyone else I’ve lost that I didn’t personally know.

He already went away once. For 10 years. To raise a family and be his own person, something he unquestionably deserved. I thought that was it. We all did! The word “retired” had firmly and strongly taken root. These last two albums, The Next Day and ★, were delivered to us spontaneously as a gift. They’re bonus. Extra. Something he didn’t have to give us, but he did. They make us appreciate what we’ve lost.

What Bowie has left behind is a body of work filled with such an indescribable positive energy that it encourages anyone listening to open themselves up to new experiences and just be the best at whatever they set their mind to being. He is… was… IS an inspiration to countless artists working in every field.

This isn’t a happy day. Not by any means. But most of us knew, one day, it would come. We currently have 26 albums. Over 700 songs. Movies. Art. Interviews. Memories. A Legend.

Thank you. Thank you David Robert Jones. Thank you Bowie. You will be missed.