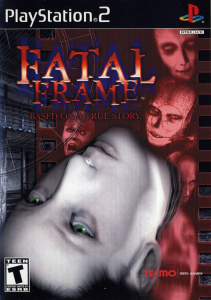 Fatal Frame. Where do I even begin with this Japanese survival horror series? It’s a series that latched onto my teenage heart with its cold, dead, ghostly fingers and hasn’t let go since.

My first encounter with the ghostly series was with the second game, Crimson Butterfly. This was back when I still visited a Blockbuster to rent videogames. At the time I’d noticed that the only games they ever stocked were the new, triple A titles or crappy movie tie-in games. Why the particular Blockbuster I would frequent decided to stock Crimson Butterfly alongside its dozen copies of GTA San Andreas I’ll never know, but from the moment I laid my thirteen year old eyes on the creepy cover, depicting two faceless girls in white kimonos tied together with a blood red cord, there was no going back. I approached my mom with the box clutched in my hands exclaiming I’d found what I wanted and could we hurry up and leave so I could play it all ready? She briefly examined my M-rated choice, told me not to play it while my little brothers were around, and shelled out whatever price it was to rent a non-new release game.

Popping it into my PS2 as soon as I got home, I sat in rapt anticipation as the game loaded and I got my first eye full of Fatal Frame. I’m not going to lie; I didn’t get very far that first play through. I had the game for a week but it was just so freaking terrifying I never found myself being able to get past the first small section of the game. Of what I played though, it stuck with me. There was something about Fatal Frame that I hadn’t seen in any other horror game and that was how subtle it all is. Shadows at the end of a hallway, voices within a locked room, bits and pieces of the story coming to you through diary entries, the way the PlayStation controller would rumble like a heartbeat when something was lurking nearby, the only way to defend yourself an old camera with supernatural powers.

But what is it really? It’s all well and good that I can reminisce about it but that doesn’t do the series any technical justice, so I’ll get on with it! Let’s start with the good stuff: the story.

In the first installment of this horror franchise the secretive Himuro family are the gatekeepers to the Hell Gate that lies beneath their sprawling mountain mansion. Every ten years the Hell Gate begins to open and the Strangling ritual is performed to reseal it. Yeah, it’s exactly what you think it is. And yeah, it all goes wrong because of course it does! The Himuro Mansion now stands as an abandoned monument to the past; an urban legend of doom and despair where anyone who enters never comes out again.

Enter Miku Hinasaki. She comes to the mansion in search of her brother Mafuyu. Through the use of a camera capable of driving away spirits and her own physic ability, Miku has to find her brother and break the curse that plagues the Himuro Mansion before it consumes her too.

Huge haunted house, check. Violent, angry ghosts, check. Vulnerable girl alone in the dark with one weapon and nowhere to hide, check. Oh yeah, and apparently it’s based on a true story too. Chilling right? It’s just too perfect! It’s pretty much my ideal horror situation. In a world where horror now consists of how much torture-porn you can get away with, this ghost story seems like a classic penned by Shirley Jackson, a personal favourite author of mine, but I digress.

The bulk of this spooky story is told through the beautifully cinematic cutscenes and the smaller, subtler bits of it are revealed through (highly missable) diary pages that are scattered throughout the mansion. Which might come off as ‘exposition-dumpy’ in some spots but I’ve always liked the mechanic. It adds layers to the story that you might not get your first time through if you’re not taking the time to poke around in every nook available to you. For example, would you ever have guessed an underlying theme of the game is love? Neither would I if I hadn’t found the diary scraps that discussed it. Without the written exposition the game comes off as kind of shallow and unoriginal. Should you take the time to find and read it you discover a story about love and loss and sacrifice. As far as game mechanics go it’s one of the most original ways I’ve ever seen to get you to empathize with the things that are attacking you. So take the time to look around because this is a top-notch story if you’re willing to find it!

But, c’mon, why would you ever spend more time than necessary looking around a haunted house? It’s get out or be killed! It’s horror’s main trope: exploration and/or curiosity is synonymous with getting your ass killed in atrocious ways. Despite knowing what poking around gets you in horror, it’s something you’ll need, and even want to do. Let’s tackle the want first.

Fatal Frame is beautiful. It’s a game from 2002 and the graphics can be a little rough around the edges because of it but there’s clever compensation to make up for that. There’s fixed camera angles and, with it being a haunted house, shadows and darkness reign. The illumination you’re given is flickering candles or moon light or Miku’s flashlight. Most cutscenes are in grainy black and white to convey the flashback element and, even out of cutscenes, the whole game has an exaggerated grainy feel of old film, in no way a mistake considering your only weapon is an antique camera. Honestly though, even without the special care put into camera angles and shadows the game would still look amazing. Considering it was a new IP by an unknown team of developers hidden away in the recesses of Tecmo, the small flaws of semi-blocky people and flat foliage are forgivable.

The need to look around comes from what you do in the game: survive. As if you didn’t see that coming: it’s right there in the genre title, people! As the petite, teenage Miku it’s up to you to save your brother and yourself, no one else is coming for you. That’s something I’ve always loved about survival horror–you’re trying to stay alive, you’re not there to change things and, consequently, anything that changes while you’re around is just good luck. Pat yourself on the back but do it quickly because hiding spots and weapons aren’t going to find themselves!

The gameplay in the first Fatal Frame would become the standard fare throughout the series, but it was something new at the time, at least compared to the two biggest horror survival at the time: Resident Evil and Silent Hill. You’ve got one weapon: the Camera Obscura. It has the power to pull in and trap spirits and includes special lenses (that you’ve got to forage for, of course) and more powerful film (that you better forage for if you know what’s good for you because big, bad bosses are not going down with Type-07 film!).

Speaking of the camera, once you bring up the camera you go into first-person mode. No more fixed angles for a time as you peer through the viewfinder. The camera will move quickly from side to side to track attacking ghosts but Miku’s already slow pace becomes even slower and that becomes yet another thing to stress about when you’ve got a ghost that teleports or goes invisible: I’m looking at you Himuro Family Master!

Seriously though, the tension that’s built during this game is palpable. I will get viscerally upset just thinking about some of the ghosts in this series… yeah, Himuro Family Master I’m still looking at you! And isn’t that what good horror is all about? Everything about the game is designed to make you feel vulnerable. The darkness is all encompassing. Play it in the dark yourself and you’ll feel just as small as Miku. The weapon you wield is bizarre, your enemies move in unexpected patterns. Your health is slight and the healing items are few and far between. Mix all that with the fixed camera angles, placed in such ways to take away your ability to see what’s even a few feet in front of Miku, and sound design so subtle and atmospheric you’ll flinch whenever you hear a floorboard creek, and you’ve got something that’s legitimately scary without being forced to resort to only having jump scares. Okay, there are jump scares, but they’d be nothing without the build up in the atmosphere beforehand.

Fatal Frame offers more than just frightened tension though and if you’re short on patience like I am, it’ll be a wonder that you can even finish the damn games! The games are hard. Balls hard. I think the first one is hardest of all. Between the random ghostly encounters, the lack of healing items and powerful film, and that every ghost from night two onwards is more or less a mini-boss, it gets maddening. Throw a controller across the room maddening. There’s different levels of difficulty too with Nightmare on PS2 and Fatal on Xbox. My hat goes off to anyone who’s beaten either. The minuscule completion bonus you’ll receive isn’t anything special, a few alternate outfits and a non-canon cut scene or two. If you’re going to beat every difficulty level it’s going to be for bragging rights alone.

Years ago I read an analysis of horror survival online that has since stayed with me and helped me judge the games I play. Is the story engaging? Are the gameplay mechanics frustrating? Is the frustration worth putting up with because the story is just so good? If that last question is answered with a yes than you’ve got something worth sinking hours into. As far as the first Fatal Frame goes, it’s a yes. The atmosphere is superbly shown through intelligent and thoughtful sound and camera angle design, the Camera Obscura is a neat mechanic that doesn’t get old quickly, and the story is some of the best horror writing out there.

So play Fatal Frame. Bask in its horror-goodness. Harden yourself into an exorcist extraordinaire as we’re but one game into this pentalogy of terror. Crimson Butterfly is next. I hope you’ve got enough film to survive till then; digital won’t help where we’re going.