A few years ago as I was putting off my homework, I stumbled upon a show from the CW.  It was about a character I had heard about in comic book lore but always thought was a little lame.  Basically, I just thought he was one of those dumb off shoot characters DC has created to make more money.  I instantly became hooked to Arrow, and by relation to the Flash as well.  I started Flash because I LOVED Arrow and how the show birthed a new superhero.  Although Flash was slow in the beginning, it definitely picked up speed (pun intended) and the cross-overs with Arrow helped give the new hero some momentum.  Between the two shows I was able to learn about and become fascinated with many of the heroes and villains of their respective sections of the “Flarrow-verse” including the shortly lived Suicide Squad story line.  Starting January 21st, a new addition is coming to the (CW) DCTV family with the Legends of Tomorrow and I could not be more pumped, and here is why you should be too:

It is like the island of misfit toys grow up and decided to fight evildoers past, present, and the future.  The problem with DC is too much focus on the core of the Justice League (Superman, Batman, Wonder Woman, Flash, Green Lantern, etc) but we tend to miss out on many of the “secondary” characters.  DC is much less inclusive with the Justice League than Marvel is with so many Avengers tagging in and out for their own story line.  The CW started us off with the Green Arrow and now we get to learn more about other characters, like the Atom, Hawkgirl, and Firestorm.  Basically, I just love the way it helps bring more “non-comic book readers” in to the fold and increasing interest in non-mainstream characters.  With the characters being a little more obscure, it is easier to create story lines that are not necessarily comic book “cannon law.”

The other cool twist is having heroes and villains working on the same team.  Knowing the hot and cold personalities of Heatwave and Captain Cold (pun intended again), it will be exciting to see why these two were nominated to join this team of legends.  I love we get to see Wentworth Miller and Dominic Purcell back together after their success with Prison Break.  They made such an awesome combo and now we get to see them kick ass again, this time with super powers and not just a tattoo of a prison escape!  Then there is a Sara Lance as the new and improved White Canary.  Will there be some wrestling of conscience between her former life as an assassin and her reborn heroic self?  Will she return to Star City for a cameo?  I know this is hero/villain team up a new concept, especially with the Suicide Squad coming out this year, but it will be fun to watch the power dynamic in action.

Brandon Routh killing it as the Atom 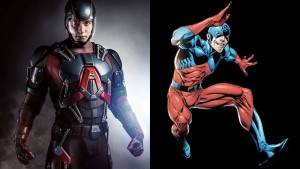 All things being equal the Atom, played by Brandon Routh, is the biggest reason for my interest in the show.  Not only is he my favorite character to come out of Arrow but Brandon Routh is an awesome actor.  His original foray in to the DC Universe started with the bomb of Superman Returns and I, along with most people, had written him off.  After joining Team Arrow, his manic personality quickly made him one of my favorite characters on the show and I kept hoping we would get to see more of him, especially once he became the Atom.  At some level he was the saving grace Arrow’s worst season to date and I could not wait to see him come back on screen.  Once he finally got the “ATOM” suit working it was “GAME ON” and there was no stopping Arrow’s newest cross-over star.  Now, I think Brandon Routh could be the next Stephen Amell and really bring new life to a lesser known character that can be a lot of fun.  I remember my Dad telling me once the Atom was his favorite DC character when he was a kid and I thought he was nuts.  Now, if Atom can continue the momentum he created in Arrow  and continue to bring more depth to the character, I may have to agree with the old man.

Ever since I first saw Michael J. Fox jump into the DeLorean and travel back to 1955 I have been in love with the idea of time travel.  Having the ability to travel to any moment in time and witness history just sounds awesome to me.  Add on top of that having superpowers and that is a one-two punch of AMAZING!  I can only imagine what it would be like to become microscopic, run into Hitler’s bedroom, and reemerge to take him to America for trial saving countless lives in the process.  While I highly doubt they will be saving humanity from Hitler, they will be saving the world from someone much worse… Vandal Savage.

When last we saw this baddy he had been destroyed by team Flarrow but Merlyn had picked up Savage’s ashes whispering he owed Merlyn one.  Now we know he has been terrorizing the future and Rip Hunter has come back to stop him.  While this is not exactly traveling to the 80’s to buy as much Microsoft stock as you can find to become filthy rich, I think it might just be way cooler.  Besides Ray Palmer is basically a cooler version of Bill Gates anyway.  We have seen only a touch of time travel in the first two seasons of the Flash but now we get to see it in the full effect.  Time travel and superpowers is going to be a match made in heaven.

What about the comic book which tie into the shows?  They recently announced the Malcolm Merlyn digital comic book, which would help us bridge the gap between seasons 3 and 4 for the character while providing Arrow style flashbacks.  This is not only a cool way to flush out non-main characters like John Diggle or Cisco Ramon, they could even tie in Red Hood/Arsenal into the show allowing us to get a real life look at Robin #2, Jason Todd.  While these stories are not necessarily related to the DC Comic Universe, it is a nice way to keep the story going when the show is on break.

The Potential is Limitless

The Legends of Tomorrow’s potential is limitless.  Each week we have the opportunity to travel to exotic places and meet strange new people.  We could eventually see all kinds of different “B” team characters like Booster Gold, Blue Beetle, or my personal favorite, Steel aka John Henry Irons.  TNT’s decision to pass on the “Titan’s” TV show means those characters could migrate to the CW.  The team’s ability to travel through time means they can tie in anything they want.   Then there are all the potential crossover events bring back villains we have seen fallen already, like the Reverse Flash and Ra’s aL Ghul though we know both already make an appearance.

For now I will just sit here and wait, checking off the days on my calendar wishing for Legends of Tomorrow, today.