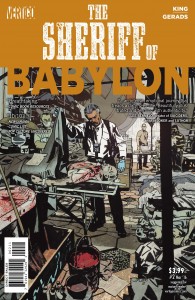 What we have in this issue is a dense, engrossing story about our two main characters; a US military police officer named Christopher and a native-Iraqi business woman slash politico named Saffiya; who has spent some time in the States as a younger woman. The story takes place in a war torn Iraq circa 2004. Writer Tom King (Grayson, Vision, The Omega Men) was a former CIA operative before trying his hand at comic writing (quite the career shift!). His past experience really comes to the forefront as Sheriff of Babylon drops the reader into a bit of a murder mystery right the middle of Iraq, post-911.

Christopher has caught wind of the murder of a former US operative stationed in Iraq and is trying to track down the body. He employs the help of Nassir, an Iraqi detective of sorts. Christopher must battle cultural differences as well as his distrust of the natives along the way. We also get to catch up with Saffiya, the shrewd Sunni leader who, with her deep connections in Iraq, is playing all sides seemingly for only her benefit.

This story is deep. It took me a couple reads to get all the details down, but it is turning out to be quite the true-to-life adventure of politics, police and murder in a foreign land. You have your hero, your mysterious strong woman co-lead and a cat! Who doesn’t love cats? As a person who watches “Dateline” religiously and loves pretty much all police procedurals, this is my kind of story. I am also so woefully ignorant of all things “Iraq” and “war” so an added bonus is that this story is so intelligently written I think I can learn a few things along the way.

Now let’s get to the art. I know almost nothing about how comic books are illustrated. Pencil on paper? Stylus on ipad? Who the hell knows? Probably a lot of people actually… but certainly not me. Anyways, the art by Mitch Gerads (The Punisher, The Activity) absolutely adds to the story. It’s grainy, realistic and has an “earthy” pallet going on that is perfect for the desert backdrop of the story. I also really enjoy the smudge overlay effect that creates an even more capturing read.

Verdict
If you like non-superhero stories that could very well be based on true events (plus murder) this book is a definite grab. I’m all-in for this 8-issue mini-series. There is no real cliff hanger per se, but I find myself wanting to know more about Saffiya and how Chris is going to get along with the curtness of Nassir.