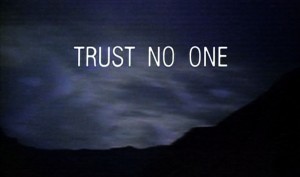 I chose this episode primarily because it is the first appearance of the Lone Gunmen, Ringo, Melvin and John who grew to acquire their own little fandom, as well as a spin-off which did not succeed. In addition to this episode being the first Lone Gunmen appearance, it is Scully’s first time meeting the trio when Mulder brings her with him to brainstorm with them. It’s a subtly hilarious scene that begins with Melvin calling Scully hot (twice) before the group proceeds to discuss recent UFO sitings. The Gunmen go on and on about their (possibly) outlandish theories of government corruption and surveillance and they all look absolutely and brilliantly crazy. The scene ends with John, puny, white as paste and wearing a suit, saying, “That’s what we like about you, Mulder. Your ideas are even weirder than ours.”

Next scene: Scully giving an in-depth psychoanalysis of the three men and informing Mulder that they are basically paranoid and delusional. She just spits out these complex medical descriptions with multi-multi syllable words, as if she were talking about what to have for dinner. It is, actually, pretty hot.

This is also a great episode to get an overview of the overarching conspiracy plot that, by the end of the show, had become extremely complex. But consider this episode the pre-k primer.

Other cool stuff in this ep:

I would like to use this last sentence to say that Gillian Anderson still looks gorgeous, is excellent in The Fall, and WAS brilliant in Hannibal, and I shall never ever recover from it’s cancellation. That is all.

The X-Files returns for a six-episode event, the first to air on January 24th.