Something Strange Is Coming: Doctor Strange and What We Know
By: Kelsey Hlavaty

Phase 3 of the Marvel Cinematic Universe begins this year following the release of the awaited Captain America: Civil War movie. In November, Marvel’s very own Sorcerer Supreme, Doctor Strange, will get a chance to strut his stuff on the big screen. Vastly different from any Marvel character to date, the movie is given an opportunity to be completely unique.

So, up until now, what do we know?

When will it premiere? Set to premiere on November 4th, 2016

Tilda Swinton – The Ancient One, born over 500 years ago who takes on Dr. Strange as his apprentice

Chiwetel Ejiofor – Baron Mordo, former student of the Ancient One

Rachel McAdams (Producer Kevin Feige stated that McAdams portrays a fellow surgeon who worked alongside Strange. Personally, I wish for her to portray the role of Clea, Strange’s magic student and lover, but this seems to be less likely)

Entertainment Weekly revealed that with the release of the above shown magazine issue, they will further explain which characters the latter actors will play.

What will the plot be?

The movie is rumored to be an origin story of how Dr. Stephen Strange came to be the Sorcerer Supreme. In the comics, Strange is a surgeon who is both arrogant and unlikeable. After a terrible car accident, Strange is unable to use his hands to perform surgery and desperately looks for means to save them – resulting in a search for the Ancient One, who in turn, teaches him the ways of the magical realm. Ejiofer’s character, Baron Mordor, is a villain of Strange in the comics, but his role is unclear in the movies. The only confirmed villain so far will be played by Mikkelsen. Given his already villainous role of Hannibal, I am sure he won’t disappoint. Producer Kevin Feige also revealed that the movie will delve into the Dark Dimension. In the comics, the Dark Dimension is depicted as looking psychedelic with a wide array of colors, which Feige says they will not shy away from. However, Scott Derrickson has several horror films under his belt, so I would not be surprised to see a creepier interpretation. Additionally, because it is one of the later films released this year within the MCU, a tie-in to Thanos and his search of the Infinity Gems will likely be touched upon.

Should you watch this?

Yes! Because it is the first new film in the phase 3 of the MCU, Doctor Strange is given a unique opportunity to provide something different to the universe. Derrickson and his team are sure to not disappoint as they have a unique talent of inserting something mystical into an average looking world (were you to consider having superheroes just an everyday normal life). 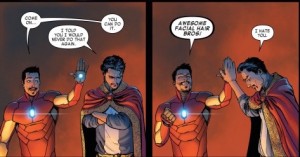 And look, if Strange enters the MCU, we are one step closer to moments such as this gem from Invincible Iron Man #3 and that to me, would be truly magical.