or, Secret Wars Destroys the Marvel Universe… Sort Of

We have arrived at the last day of 2015, a year that saw the House of Ideas literally blow up the entire publishing line during a legitimate universe-shattering event storyline known simply as Secret Wars.** Where we started and where we have ended up looks at once completely different and yet somewhat familiar, and such is the curse and joy of following everyone’s favorite franchise publishing house: the mighty Marvel Comics.

In putting together this year-end wrap up for Marvel, I’ve decided to split the year into three distinct segments: first, we have the pre-Secret Wars books, published from January through about May 2015; second, we have the Secret Wars spin-off series—distinct, whacky, off-the-walls mini-series set in the Battleworld remains of the universe; finally, the All-New All-Different Marvel Universe, the brand new #1s that spiraled out of the “end” (?) of Secret Wars, but actually predated the final issue by about 3 months!

In each segment, you’ll find highlighted books that capture the spirit and successes of Marvel during the specific period. All in all, it’s been a weird and wonderful year for Marvel, as the Secret Wars implosion actually allowed the publisher to take risks on creators and content that we haven’t seen in years.

[** – I know Marvel ran a ton of awesome STAR WARS related material this year as well, a lot of which is super cool and super wonderful. Be sure to revisit all of Mara Wood’s spectacular month-by-month wrap-ups to catch up on the best Star Wars books from 2015!!!] 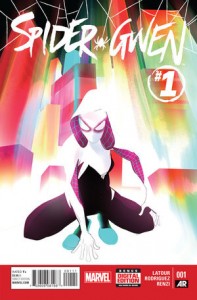 Toward the tail end of 2014 and very beginning of 2015, Marvel wrapped a series of books that would anticipate the diversity and experimentation of what would come. Books like All-New X-Factor, All-New Ghost Rider, She Hulk, and Elektra were either mid-run or ending, but they all reflected an energy and freshness that franchise titles like Avengers and X-Men had lost (and upstart lines like the Inhumans couldn’t quite muster). With stellar creative teams who seemed to be flat-out told to reinvigorate and create at will, the success of these books extended the spark ignited by 2014 break-outs like Ms. Marvel, Silver Surfer, and Rocket Raccoon. Despite a lot of series conclusions in early 2015, Marvel’s shift toward what Editor-In-Chief Axel Alonso called a “seasonal” model for publishing (short runs steered by the creative team) books made it much easier for books like Howard the Duck and Unbeatable Squirrel Girl to find their way onto the stands.

Furthermore, the seasonal model allowed for greater consistency on titles, as series held onto writer/artist storytelling teams for long, deliberate runs. Nearly all of the books mentioned above had a distinct writer/artist creative team that carried the book almost through the entire run. Mark Waid and Chris Samnee continued their run as the “storytellers” behind Daredevil, redefining the relationship between creator and property. Nathan Edmondson and Phil Noto’s Black Widow was a masterclass in long-form, modern espionage that ran all the way through the Secret Wars event, as every issue was helmed by the same storytellers. Jason Aaron and Russell Dauterman stayed with Thor as they told (and continue to tell) probably one of the greatest stories in the property’s history. Finally, Dan Slott and the Allred’s told a universe-spanning, mind-bending Silver Surfer story that featured some of the wildest visual tricks in the comics medium. 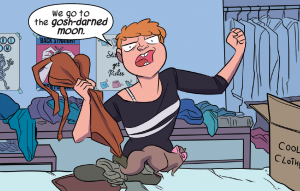 Compare the focused consistency of these “riskier” titles with the relatively mediocre impact of franchise titles like the myriad Avengers and X-Men books. Despite having some top-tier writers like Jonathan Hickman, Rick Remender, and Brian Michael Bendis guiding multiple books across these two flagship franchises, the smaller, “seasonal” titles found much more critical (and in some cases commercial) success. Don’t get me wrong—“Time Runs Out” was a spacy, high-fantasy, high-stakes twist on the Avengers & New Avengers books that led expertly into Secret Wars, and Brian Michael Bendis took the X-Men into some strange and exciting new places with Uncanny and All-New X-Men—but the reality is that the books that really made an impact and felt unique and exciting (and worth the money and attention) were books like Ant-Man, Unbeatable Squirrel Girl, and Thor.

Hell, even the “Spider-Verse” story that ran through Dan Slott’s Amazing Spider-Man did a better job of launching new and exciting titles than it did to energize the parent title! Titles like Silk, Spider-Woman, and the amazing Spider-Gwen spun out of “Spider-Verse” and onto Top New Comics lists throughout the year. Spider-Gwen in particular has enjoyed critical-darling status for a while now, earning its own parody spin-off in the recent Gwen-Pool book. 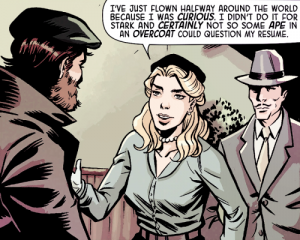 You might also have noticed a larger focus on female-driven titles in the paragraphs above—Silk, Black Widow, Spider-Woman, Spider-Gwen, Unbeatable Squirrel Girl, Elektra, Storm, Ms. Marvel, Captain Marvel, She Hulk. Thor was a woman and Peggy Carter had her own series in Operation SIN. The beginning of 2015 saw a healthy stable of female-led books, but it really was just a precursor to things to come as representation both on the page and behind the pen earned greater focus in the industry conversation throughout the year.

It was an exciting start to 2015, but a lot of fans had to swallow the hard trust that their all-new, all-different favorite series were going to get blown up when time ran out in May. 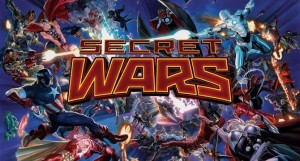 TIME RUNS OUT. RIP EVERYTHING.

Bottom line: Secret Wars #1 was kinda lame. Jonathan Hickman pretty much used the first issue as a coda to his ongoing Avengers saga, which, for those who weren’t following along or had fallen off because “wtf is going on?”, made for a confusing, lackluster “END OF THE UNIVERSE” series of explosions and deaths. Fans felt let down because it was a lot of noise for really no other reason than ending a lot of really promising, really excited books (see above). 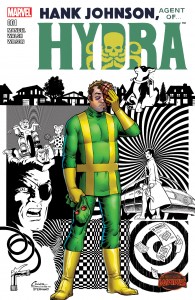 And then Secret Wars #2 arrived and things got… weird.

All of sudden, Dr. Doom was a god who ruled over a Game of Thrones-esque Battleworld made up of different subsections based on various universes from across Marvel history. The Thors were a cross-dimensional police squad. Dr. Strange was a sheriff. There were zombies and Ultrons and Annihulus drones behind a wall called the SHIELD. It was bizarre and batty and totally tripped out. It was literally unlike anything Marvel had seen before (aside, of course, from the aforementioned Game of Thrones parallels), and it was so out-there that it was genuinely exciting. 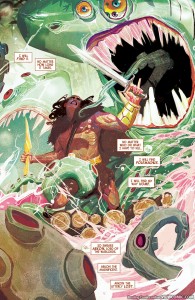 Even more exciting? The first round of spin-off series. Books like Master of Kung Fu, Weirdworld, and A-Force that featured familiar characters and settings, but the things they were doing and the stories that were being told were such glorious and glaring passion projects of the creators that the entire enterprise suddenly had a vim and vigor that Marvel hadn’t seen in years. My personal favorite? 1602: Witch Hunter Angela, which teamed Kieron Gillen and Marguerite Bennett with artists Stephanie Hans and Marguerite Sauvage, and which saw the team take the world established by Neil Gaiman nearly a decade ago and literally do whatever they wanted with it, working in Angela and the Guardians of the Galaxy, but through the lens of Elizabethan England. How Gillen and Bennett managed to write four full issues in Shakespearean Early Modern English, I have no idea, but I loved it.

Over the summer of 2015, Marvel felt like an indie publisher. Gone were the “franchise” flagships like Avengers, New Avengers, Uncanny X-Men, Uncanny Avengers, etc. etc. etc. Instead, we had books like Hank Johnson: Agent of Hydra, Secret Love, MODOK Assassin, Age of Ultron vs. Marvel Zombies, and Mrs. Deadpool and the Howling Commandos. Of course, a lot of the tie-ins were based on best-selling events and storylines from across Marvel history (Civil War, E is for Extinction, X-Men ’92, Future Imperfect, House of M, etc.), but the real success of the Secret Wars tie-ins was the very real experimental atmosphere that permeated the summer months. Literally any book could be about literally anything—some twist on your favorite story from years ago or some reimagined version of your favorite character. Were some more successful than others? Sure, but when nostalgia mixed just right with the right creative time and the right twist, the books garnered positive reviews and carried the publisher through to the fall. 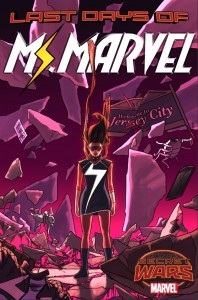 While many books were ended by the Secret Wars wipe, some successful smaller titles like Captain America and the Mighty Avengers, Magneto, Ms. Marvel, and Loki were able to enter a “Last Days” story arc, which saw some emotional and impactful storytelling. G. Willow Wilson’s handling of Kamala Khan’s desperate attempt to save Jersey City in the face of inevitable annihilation earned its way onto the Talking Comics Best Of lists for a reason.

Of course, the creativity and the energy in these months produced some exceptional comic book storytelling, but the growing impact of single-issue pricing quickly became a problem for consumers. The inhibitive cost of some of these books I’m sure kept readers from experiencing all the books they may have wanted to.

Inevitable delays in the main Secret Wars event put a serious damper on what was otherwise an exciting time for the Marvel line. As the spin-off mini-series each came to intriguing, satisfying conclusions (including the end of Kelly Sue DeConnick’s iconic run on Captain Marvel in Captain Marvel and the Carol Corps), Marvel was stuck with an impending line-wide relaunch and the event that was supposed to ignite it was 3 months behind schedule. 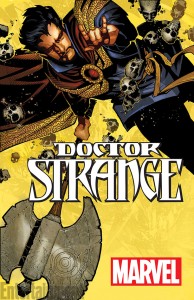 Doctor Strange with an axe was a selling point for this book. From Jason Aaron and Chris Bachalo.

Marvel made the wise choice of launching All-New All-Different Marvel even though Secret Wars was essentially 3 issues behind schedule. Sure, we don’t know how things exactly went down to cause this new universe to exist, but ultimately, who really cares? Since October 2015, Marvel has launched a myriad of promising, exciting new series that capture the spirit and energy that has been slowly building over the course of the year. Essentially, All-New All-Different combines the creative energy of the Secret Wars months with the creative team focus that made the end of 2014 and early 2015 so successful.

Jason Aaron and Russell Dauterman continue their Mighty Thor run with Jane Foster in the lead. G. Willow Wilson and Adrian Alphona continue their ground-breaking Ms. Marvel run. Jeff Lemire and Ramon Perez continue their run on All-New Hawkeye. New volumes (or should I say “seasons”), but the quality and the caliber is still there. 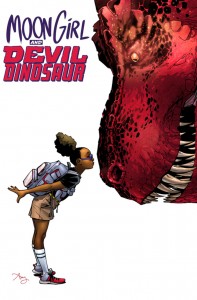 The diversity of the line has also continued, as Marvel as taken advantage of the new universe with new legacy characters or reimaginings of old stories with new faces at the fore. With successful launches of All-New Wolverine with Laura “X-23” Kinney in the lead, Captain America: Sam Wilson, a new Moon Girl and Devil Dinosaur series from Amy Reeder and Brandon Montclare, Totally Awesome Hulk with Amadeus Cho in the lead and helmed by Greg Pak and Frank Cho (Korean-American characters being written/illustrated by Korean and Korean-Americans?!?!?), and impending new seasons of Captain Marvel, Spider-Gwen, Spider-Woman, Angela, Mockingbird, Gamora, Unbeatable Squirrel Girl, Black Widow, Silk, and A-Force, women and characters of color have a larger and more prominent voice both on the page and behind the pen that they have in recent memory.

And, as a button on an otherwise dynamic and exciting year for Marvel, last week saw the publication of Patsy Walker, AKA Hellcat #1 from Kate Leth and Brittney Williams, an incredible, hilarious, wonderful comic book that perfectly captures everything that Marvel did right in 2015. If the House of Ideas keeps up the emphasis on diversity both in terms of characterization and creativity, there might be some big and exciting things down the pike for 2016. 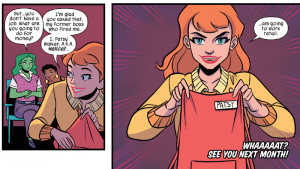 And bring on that Ta-Nehisi Coates Black Panther!!! 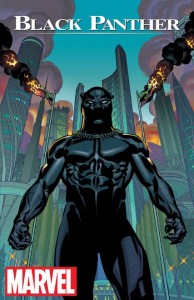