Not to beat around the bush, I’m a huge fan of The Rocketeer, becoming instantly hooked on Dave Stevens’ re-imagining of the 40s movie serial character, Rocket Man. The artistry he displayed in bringing these tales to the page continues to astound me more than thirty years on, and for those looking to see why, you might want to check out two pieces of mine from a while back, Remembering the Real Rocketeer , and Dave Stevens: Covers & Stories . Mr. Stevens’ work on the original series of Rocketeer stories remains so singular that any continuance of his signature character has a nigh-impossible standard to live up to; nevertheless, IDW has published a number of mini-series (Rocketeer Adventures Anthology, Cargo of Doom , Hollywood Horror , Pulp Friction , which co-starred The Spirit, and even an anthology of prose stories titled “Jet-Pack Adventures”!) that for me have been right on the money in delivering the proper mix of action, adventure, 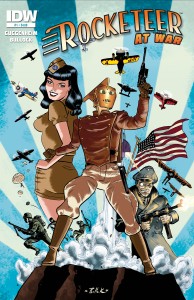 and humour, without ever seeming a too-close copy that would invariably be a pale imitation. Does this new outing soar, or does it crash and burn as that zeppelin did during the conclusion of the 1991 Disney film?

The Rocketeer at War #1 opens with what might be considered a pre-credit sequence, a scene of an ill-fated 1942 test flight of Cliff Secord’s (“I’m the Rocketeer!” “The Rocka-who?”) jet-pack, which we will soon learn he donated to the U.S. Government when he volunteered for the armed forces. The scene then shifts to North Africa, and we see that Cliff, even as he cracks wise, is in a real spot-of-bother trying to take out a Nazi machine gun emplacement, and he’s only saved due to a daring, last second strafing run from an R.A.F. pilot, a maneuver that results in the plane’s crashing!

This bravura beginning sets the tone for the rest of the book, as brisk action sequences are shot full with the sort of dialogue you’d have heard in an actual WW II era film, and with a plot featuring Nazi scientists, glider suits, and the ever-popular death ray, the creative team of writer Marc Guggenheim and artist Dave Bullock has assembled a winning mix. While this first issue does hew closely to the expected pleasures, the backdrop of the Second World War and a new addition to the dramatis personae will certainly keep our Mr. Secord hip-deep in trouble for the foreseeable future. (For long-time readers, yes, Cliff’s gal Betty makes an appearance, and I’d imagine we will be seeing quite a bit of her as the series moves along, at least based on the cover!)

As to those creators, Marc Guggenheim is just off the Secret Wars title Squadron Sinister, 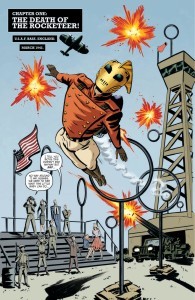 and despite a small body of comics work, is probably best known for being the show-runner for the “Arrow” television programme, and the story reflects that cinematic approach. Dave Bullock’s focus has also tended more toward the movies, most notably providing storyboards for the animated “New Frontier” film based on Darwyn Cooke’s series. Mr. Bullock’s retro-stylings have much in common with Mr. Cooke’s, which makes them a nice pairing with a story set in this time period, and are of-a-kind with the other artists who’ve worked on the various minis, in that IDW seems to have made a conscious (and conscientious!) decision to avoid slavishly aping Dave Stevens’ very-detailed work, a move I heartily endorse!

All-in-all, a fun first issue that does a fine job of table-setting without ever letting that function get in the way of telling a ripping-good yarn!

VERDICT: If you’re a fan of The Rocketeer, whether it’s Dave Stevens’ original series, or are only acquainted with the character and his world through the (sadly under-rated) film, this new mini-series from IDW contains elements that will seem like comfort food, but with some different spices added to the recipe, it’s a brand-new dish worth sampling!

ADDENDA: As in the film, the inventor of the jet-pack is said to be Howard Hughes; in Dave Stevens’ original, although he wasn’t mentioned by name due to legal concerns, the creator was clearly pulp magazine hero (and super-genius) Doc Savage!

I was a mite confused early in this issue when I saw Cliff as an infantryman, but more than a bit pleased to later see him add the patch of the U.S. Army Air Force to the shoulder of his flying jacket. I know that emblem well, as my Dad served in that branch of the service (the precursor to the U.S. Air Force) during WW II.