King Conan #1: Wolves Beyond the Border 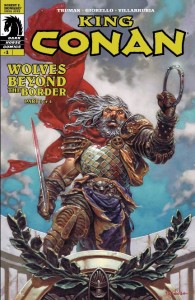 I am a fan of Robert E. Howard and Conan and Kull and all things both Hyborian and Hyperborian. They are good stories, good characters, and I enjoy spending time in that world. But I had given up on idea that a Howard joint would ever surprise me in its greatness. The first issue of Dark Horse’s new King Conan mini-series has done that.

Dark Horse, over the years, has done a fantastic job of approaching Conan the B from a number of angles. This is not an uncontroversial thing to say, as there are those who think otherwise. Early on they shed the John Buscema hyper-realism that had calcified around the character. They dared to present the young Conan, as a thief, somewhat lean and wrangly. They approached some of their stories with a more cartoon-ish or illustrative style that really, to my mind, suited the magical aspects of the story, and even found some of the humor therein. All the while they remained true to Robert E. Howard’s vision as they understood it.

Admittedly, Howard’s works are practically made to be presented in comic form. Is there any other work that adapts so readily to panels, word balloons, and four colors? Some might say that this is because Howard’s characters lack any semblance of an inner life. To which I reply, sometimes an inner life is over-rated. Previous King Conan mini-series have borne this out.

Wolves Beyond the Border is an unfinished Howard story that has been completed by the team. I have not read the story (or fragment), but the plot seed is that Conan hears that there lands to the West, beyond the seas. He has a visions of the islands that once existed in those seas, and resolves to see those lands. “I swear to you,” he says, “My bones won’t be buried HERE!” From there, adventure ensues.

It’s a good plot from Howard (they weren’t all good, after all), and the script is excellent. Somehow they manage to do something that other King Conan stories have failed to do: present the barbarian as old. Not feeble or decrepit, but old, as in having lived many years. The Old King scarred, battle worn. As cranky as ever, and powerful enough so that only his friends complain. And perhaps he senses his end coming? A last adventure for the Old King? There’s some of that inner life I was talking about, implied in the lines of script and the lines of art.

The art, though, is what surprises. So very good. A true collaboration, the book presents a coherent language of image, colors, textures, and text. I wish I had more technical capacity to describe it, but the brush of colors, the textured shading (hatching), and the composition of the drawings manages to evoke both Berni Wrightson and N.C. Wyeth. I am not exaggerating, and I am not engaging in hyperbole (or hyper-perbole). I can’t think of two more worthy stars to steer a comic book by.

Verdict: Yes, buy it. Dark Horse presents a great story and a beautiful — almost classical — work of the sequential art form, while continuing their excellent treatment of Conan. Really something.