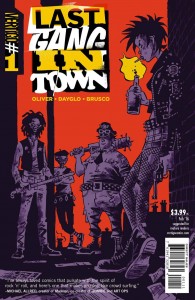 Last Gang in Town is a gritty crime comic that takes place in the late 70s, is drawn by Tank Girl artist Rufus Dayglo, and is named after a Clash song…Oh yeah. The heyday of punk in the seedy, soggy, filth covered streets of London can give rise to some of the raunchiest, alcohol soaked, drug addled, rock and roll stories of all time. What more could someone ask for? Well, just a little bit more.

We join our gaggle of miscreant street rats (a small punk band too poor to buy their own instruments and trying to make it) staking out a concert venue after a bunch of sellouts performed songs from their concept album (barf). The heist? Steal some instruments so they can play their gig later from under the nose of the roadies. The plan? Use the groupies’ “services” as a distraction, pilfer the tour bus and haul ass through the busy streets of downtown London. They are Heavy Mannerz.

Now flash forward to Switzerland 2018 — wait what? — to introduce this books narrator, a yet unnamed old lady remembering her part as the benefactor/schemer/leader for what would be the “crime of the century” that somehow involves our band of (anti)heroes — ummm, sure. At least she wears Vivienne Westwood. This is the part of the book where my “asking just a bit more” comes in. This was a decent first issue, but I think it could have been much stronger if the flashes forward to the future and the unnamed megalomaniacal rich lady were omitted entirely (even if she has killer fashion sense — seriously, Westwood is awesome). I don’t mind narration in the past tense, but actual scenes taking place in the future juxtaposed with the main story takes me out of it too much. However, I immensely enjoyed the exposition of the madame’s past trauma used to justify her actions and ideology, I think it perfectly outlines the feeling behind the creation of the punk movement, in fact the metaphorical implications of that scene might be my favorite part of the book. As much as I liked it, I think that past trauma and the resulting quest for disruption is better suited (for the sake of cohesion as much as flavor) as the motivation for Alex, a lovely, mannerless punk we meet in a cafe midway through the first issue.

As mentioned before the art is done by the amazing Rufus Dayglo, and what’s more in flavor with late 70s punk than the art that brought Tank Girl back to life after Hewlett? The art in this book is fantastic, it is so noticeably Dayglo, and that makes it so great. Notes in the margins combined with the Westian Batman-esque visualized onomonopias bring the pages of this comic to life, and each character is unique in their own caricature giving limitless range of expression. There’s not much you can say about Dayglo’s art, it’s more of something you have to experience. The way he stitches together the panel to panel journey he takes you on makes him an instant favorite for anyone with good taste.

Verdict:
Maybe buy?
It’s not that I didn’t like it, but this book isn’t for everyone. It definitely wasn’t what I expected from the previews. This comic unfortunately did not have a very strong first issue for me, mostly for the reasons explained above, it just didn’t hook me as much as I was hoping. Dayglo fans who buy this book out of principal won’t be disappointed by the art, but your average reader may want to pass this book up for another one of Vertigo’s new titles. For me, I’m a big sucker for Dayglo’s art and anything involving the punk subculture so I’m going to give the second issue a read. I hate to completely dismiss a comic based on the first issue because you so rarely have a lot of information to where the writer is going or why they did what they did. If you feel the same, I’d definitely say give Last Gang in Town a shot. If you’re not into all that or if you’re a comic buyer on a budget, this is probably one to pass up.