Starting life as a mashup take on Deadpool and Gwen Stacy on a variant cover by Chris Bachalo, it’s fair to say Gwenpool’s rise to fame has been pretty swift. Ending up gracing the pages of She-Hulk and as a back-up to the current volume of Howard The Duck, Gwenpool’s popularity has earned Ms Stacy another ongoing in ‘ The Unbelievable Gwenpool.’ The creative team will be made up of Chrisopher Hastings (Deadpool: Fear Itself, Adventure Time) and Gurihiru, which is the team of Japanese artists Chifuyu Sasaki and Naoko Kawano (Thor, Captain America). 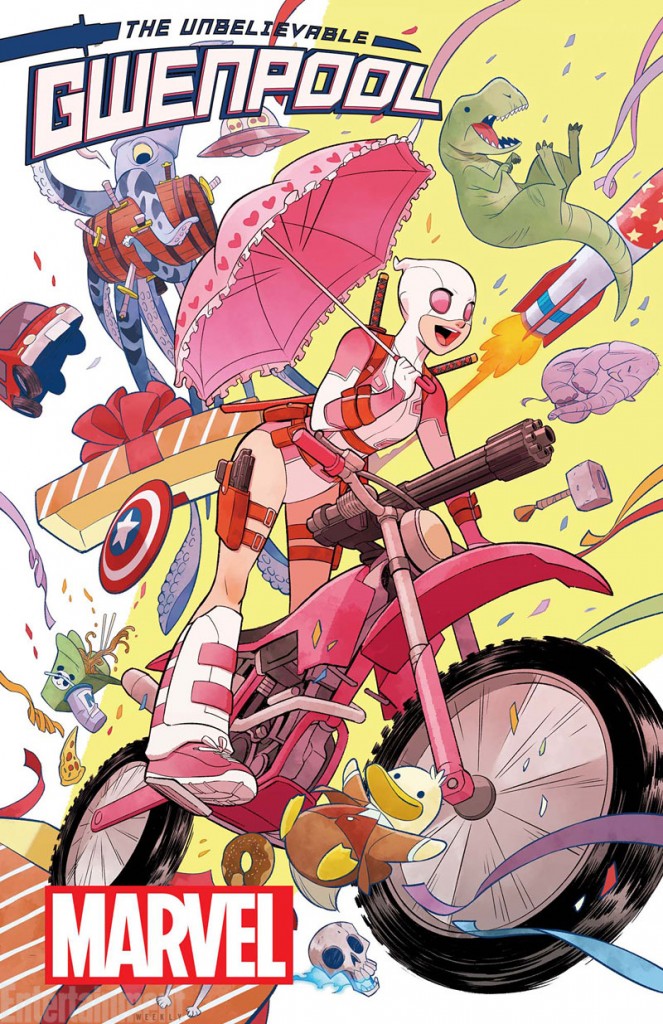 Hastings admitted that when he was approached to take on the book, he was still unaware of Gwenpool, saying in an interview with Entertainment Weekly: “When I was called to write her I was not aware of her existence. I didn’t go to San Diego this year so I didn’t get to see any of that cosplay. Basically Jordan [White, editor] was like, “yeah, go do a search for this and see how many people are dressed up as this character that we don’t have a comic for.” It was initially going to just be a very short one shot in that Christmas special and we were like, how do we do this Gwen Stacy-Deadpool character? What was assumed of her based off of those variant covers that she came out of? And then Jordan said, “also we want to do this Howard The Duck backup thing to introduce her before the Christmas special.” So it escalated very quickly.”

Hastings was then asked for some details as to what we can expect from the book, saying: “Her whole deal is, she’s from the world that she claims to be — some sort of “real world” — and knows of the Marvel universe as a fictional one. So the series is a lot about her believing she’s in a fictional world with no consequences. She’s seen everyone come back to life at some point, and it sort of seems like she’s living in a video game. And then the book is going to be the universe fighting back at that. Like, “you can’t really get away with everything” is kind of the struggle there. It’s also sort of, she just assumes, “I’m obviously a main character so I need to be a superhero” even though she has no powers. I really like all of these comics right now about these teen heroes sort of figuring out what they’re doing in this world. But they come at it from a much more altruistic viewpoint, and I think it’s really fun to have somebody take on the mercenary angle and sort of like, contrast her against someone like Kamala Khan, as we did in the holiday special.”