This month’s offerings are a great opportunity to look at a few series that might have sneaked passed you. That is not to say that there aren’t many classic series that are receiving fresh coats of paint in their format. Once again, remember that your local comic shop will need your list by the middle of January.

Vader Down is proof enough that Star Wars can work as a comic just as much as any Marvel property. The crossover is seamless and the story is action packed. It’s hard to understand how anyone interested has not already read it in single issues, but if you have, then it will be worth the wait.

This is one of those rare Absolute Editions that also feels like an omnibus. This monster will contain the first 26 issues of the groundbreaking Vertigo series. It’s pricey, but for Preacher fans it will be well worth it, especially those wanting to revisit the series before the AMC series premiers.

Anyone unfamiliar with this series might be turned off by a 40 dollar price tag on these collected four issues. Anyone familiar with it won’t mind. DC is right in celebrating the 20th anniversary of this masterpiece. Kingdom Come was a breath of fresh air to anyone turned off by the substance-lacking content of the nineties, and two decades later it still serves as a reminder as to why these characters are timeless and why heroes are never a fad.

If you haven’t pick up the other volumes in this series that focuses on Darwyn Cooke, Ivan Reis and Frank Quitely, do so quickly. DC is giving their modern heavyweight artist the red carpet treatment, and naturally its Jim Lee’s turn. The only shame with these books is understandably that they only include their DC work. With a creator like Lee, that should be enough.

Yea, it’s BKV, so there will inevitably be an oversized hardcover, but that will be at least a year and a half from now. Buy the first trade and give it to a friend with the next edition comes out. Like any Vaughan series, this one feels just as ripe for multiple reads. Also, the Cliff Chiang are is icing. I know it’s a cheap move to say the less you know the better, but this is one of those cases. Just let the hints of the eighties, aliens and newspaper girls written by Vaughan be enough of a tease.

With comics like GCPD, Stumptown and Queen and Country, no one can write a good mystery like Greg Rucka. Black Magick continues that tradition, but with a supernatural edge excellently supported with Nicola Scott. Scott’s art is incredibly engaging, and the series displays not only a fresh perspective on procedural comics, but also its portrayal of Wicca.

I’m sort of a history buff, and love the romanticism that surrounds the Revolutionary War. It’s surprising that it rarely is used for storytelling, especially when Brian Wood and Andrea Mutti show that it works so well. Instead of focusing on the major players of the Revolution, the series focuses on the personal lives of the soldiers. It’s a well-constructed comic that is falling under a lot of radars. Hopefully the trade will open the door for a larger audience. 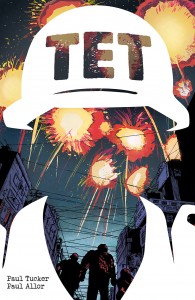 As underrated as Rebels has been, Tet’s reception has been almost criminal. Paul Allor and Paul Tucker are two exciting creators and their series is a fresh take on the war comic genre. A murder mystery set to the background of the Vietnam War is such a heavy and unique idea and these two handle it’s admirably. I can’t wait to follow their career, and this is a great place to start doing so.

Remember to let me know in the comments what books you are picking up this month. Happy reading!