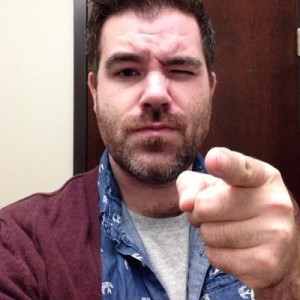 On this week’s Talking Comics podcast, we discussed The Violent #1 from Image Comics. The timing was perfect to chat with co-creator and artist on the series, Adam Gorham.

We were originally going to do this as a podcast, but I feel obliged to share the fact that Gorham is basically a 90-year old man who has no idea how technology works so we’re doing it the old fashioned way via snail mail, which is in this case, just plain ol’ email.

Adam, you and I go back a ways and it gives me joy to see you on such a great book. How did you get involved in working on in?
Ed asked me if I’d like to pitch a book with him. I had known Ed for a few years at that point. We met at Fan Expo one year and that weekend he gave me copies of his Murder Book series. I read them at home and really enjoyed them all. So I was surprised but excited that a few years later he’d ask me to draw an extension of those stories.

You and Ed have known each other for a while, was working together always something you had planned on?
Not at all. I was really surprised when he asked if I was interested in pitching a book with him. At the time I was involved with other writers trying to get our respective projects off the ground. We share many friends in the business and he was seeing my new work online. Something I did must have turned him on to me. Ed’s offer felt too good to pass up, so we made a go of it. I’m happy how it’s all turned out. 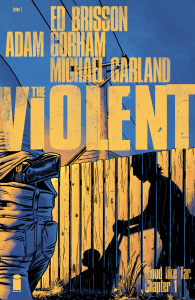 As an artist, how much of the process of writing and scripting do you get involved in? Do you speak up if you think something would work better a different way or do you just leave that part to Ed?
With Ed I have a fair amount of input. Our first story arc, Blood Like Tar, was something he had mostly formed when we got started on The Violent, but I had input as he constructed it. We would discuss the themes of the story and the characters on a level beneath the plot. With The Violent, we aren’t just producing hard boiled page turners. We aim to look at the causes and affects of crime and violence. You read headlines about awful crimes that happen in your city and you think, who does these things? Our comic explores that. As Ed writes and plots, I’m welcome to give notes if I had an especially good idea, or I help solve logistical problems with plotting action. Ed and I see eye to eye on storytelling and we trust each other to shape the story as we see fit creatively.

What do you do to push yourself to get better at your craft?
I constantly tear my work down. That’s not an expression, either. I’ll re-draw entire pages if I know I can do them better. Learning not to be too precious about my art was one of the most liberating experiences I’ve had as an artist. If I see I can do better, I have no problem with scrapping the work and starting over. Case in point, we pitched The Violent with 5 pages–the opening scene–and in the time it took the book to be greenlit at Image and later break ground on it, my skill level had risen. I had worked on Dead Drop at Valiant and I grew as a storyteller, so when it came time to start The Violent I just could not stand those five existing pages. So I re-drew them all, and I’m happier for it.

Trying to make it in comics can be quite a slog and you and Ed both have families. Was there ever a time for you when you thought about leaving the dream behind?
Yeah, numerous times. It’s rough. It really is a pursuit of passion. Not everyone has the knack for it and not everyone has the same mileage with their skill level. For many years I was trying to hack it, but I’d be working part-time retail jobs, warehouse jobs, all while working on comics in the evening, often to the chagrin of my spouse. Rarely was it ever a fun or easy experience. I have to say though, my biggest roadblock was myself. I was lucky to have supporters, people who encouraged me and saw potential. I had the virtue of being pretty good out the gate. At the end of the day though, it was up to me to push myself harder and improve as an artist. Sometimes I hit my ceiling and thought, I’ve climbed so high–I’m pretty good now! That’s dangerous because that self-contentment means you lose your edge and stop improving. For a while that’s what I did. I was happy with being a large-ish fish in a small-ish pond. Then I’d sit and lament that people weren’t handing me opportunities or opening doors for me. It took me a couple years to realize you’re never as good as you think you are, and that opportunities come when you’re ready. Eventually I had to kick my own ass, tear down my work, and go for broke.

What’s appealing to you about The Violent? Aside from working on a book with Ed Brisson, what made you decide to take on this project?
I love crime stories. Some of my favourite movies are crime dramas. There’s nothing like reading a hard-nosed, understated crime novel to cleanse my pallet between sci-fi novels or epics. I’m fascinated with the grey-areas of morality, the underbelly of society, the way we as people are pushed and pulled by societal structures we can’t even perceive because we’re in the trenches, so to speak. The Violent revels in al that. I’m a pretty normal person. I can’t say I’m super great or decent person, but I’m not robbing banks or running guns. I’m simply not cut out to be a criminal, but criminals fascinate me. I generally obey the rules. Every once in a while I witness someone break the rules we adhere to and they get farther ahead. When that happens I don’t know whether to be mad or applaud them for their tenacity. That’s the playground The Violent finds itself in and I’m excited to be part of it.

Marry, F*ck, Kill: Batman, Superman, The Flash
I’d marry Superman, fuck Batman, and kill The Flash. The Flash always pulls some dumb shit and resets the fabric of reality. Who needs that headache every decade? Batman seems like he’d be a good lay because he’s got some aggression to let out, but would I want to wake up next to him? Imagine that walk of shame. Supes is where it’s at. He’ll never let you down.

You have to reboot one of your favourite movies of all time. Which movie do you pick, who do you cast and who would direct it?
I firmly believe we should be re-making bad movies and leave great movies alone. I would love to re-make some bad films, take what worked or was interesting and fix what didn’t. I would love to re-make Doom, or Lost In Space. I would direct and star, of course.

You’re a big Batman fan, correct? What is the most essential Batman title, in your humble opinion?
Yeah, I love Batman, but I think the essential Batman stories are the ones we already celebrate. Year One and The Dark Knight Returns are the Alpha and Omega of modern Batman stories. Everything in between is up to the reader. I love that you can buy trades of this character that’s been around for 75 years and kind of choose what parts of canon you want to acknowledge. I really loved what Grant Morrison did with him. I thought it was brilliant.

One of my favourite things to ask about is artist’s weird commissions. What has been one of the weirdest things that you’ve either been asked to draw or that you’ve actually drawn?
I can’t say I’ve ever been commissioned to draw anything weird. I’ll get the odd nude portrait request, or I’ll be asked to draw a real person as a super hero, but nothing I can brag about. Maybe 2016 will be the year of freaky commission requests.

Last but not least, without spoiling anything, what has been one of your favourite things to draw in the comic so far?
As I write this, I’m two issues in. There’s some heavy stuff coming up that I’m looking forward to. Perhaps my most favourite piece is the cover to issue three.

The Violent #1 is in comic shops everywhere. Written by Ed Brisson with art by Adam Gorham.