Letters by A Larger World 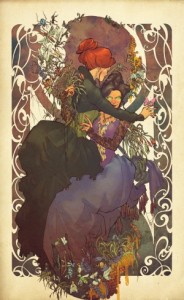 Set in an era with some of the most prudish and sexist societal values, Marguerite Bennett and Ariela Kristantina’s Insexts #1 explores the dualities of sensuality and gore. This first issue shows us the beginnings of a compelling love story that looks quite a bit like the scary demon love child of Penny Dreadful and Saga. The story? Lady Bertram, sick of living as a prisoner of her life with her husband, finds comfort and love with her maid Mariah. They plot their revenge against the Lord Bertram with the help of some sinister forces.

Marguerite Bennett has this amazing ability to make you immediately familiar with the story she’s telling and that’s never been more apparent than in here in her creator-owned series. This issue never misses a story beat and can easily be read as a satisfying oneshot or an ongoing title (though I am immensely happy that it is the later because I NEED more). Bennett doesn’t waste the space she’s given with superfluous dialogue that one would associate with the era. It’s straight to the point. Don’t mistake the directness with simplicity though. There are so many intricate layers to this issue. Taking into account the severely conservative views of women and sexuality during the era and the horror aspects to this book, I’m looking forward to deconstructing this story more as we go along.

Verdict: Buy. Definitely buy. I was in love with the concept when this book was announced and now that I’ve read it, I’ve fallen even more in love with the series. As a comic fan and a queer woman who spent the last two years studying women writers just before this era, this is everything I could of asked for in a creator-owned comic book series. There’s love! There’s sex! There’s an abundance of agency for female characters! Oh, and you can bet some bad men are going to meet their makers. Lady Bertram and Mariah’s love is never questioned through this issue and with the developments in the last couple of pages; you can only wonder just how far they would go for love and revenge. I can’t wait to see it all play out!