Monstress by Marjorie Liu and Sana Takeda tells the story of a young woman who hails from a worn-torn culture. We first see her as an object, a slave, and quickly realize that she is more of a savior and a heroine. Maika is a complex character, one that reveals aspects of her personality and motivation as the story progresses. With only two issues down so far, we can begin to piece together who she is and the journey she is on.

Maureen Murdock developed the Heroine’s Journey after Joseph Campbell informed her that women do not embark on the Hero’s Journey. Per Campbell, a woman just needs to come to terms with “realiz(ing) that she’s the place that people are trying to get to” (Murdock, 1990). Many of you are already familiar with the Hero’s Journey (just take a look at Luke Skywalker – classic example from modern mythology!). We may be familiar with the man’s journey to becoming a hero, but women follow a different path. According to Murdock, the Heroine’s Journey is a reflection of her inner development. Men are all about outward action in their heroic journeys; women are all about self-actualization and changing the world from within.

Murdock is a counselor, one show specializes in working with women. From her practice, she developed a series of steps common to women embarking on a heroic journey, no matter the scale.

The steps as described by Murdock are:

Separation from the Feminine

Identification with the Masculine and Gathering of Allies

Awakening to Feelings of Spiritual Aridity

Initiation and Descent into the Goddess

Reclaiming of the Femininity

Integration of Masculine and Feminine

It is important to note that this will be an ongoing analysis of Maika and Monstress. The story is not yet complete, meaning our interpretation of events and development can change as the story progresses. Piecing together the journey is the fun part, though. We are more attuned to how Maika changes and grows throughout the comic when we put on our analysts glasses.

From here on out, there will be major spoilers for Monstress issues #1 and #2. If you haven’t already read them, I highly recommend you pick them up in your preferred format. Liu and Takeda are telling an amazing tale, and their work deserves to be noted and consumed.

Shedding the feminine aspects of the person is the first step of the Heroine’s Journey. In it, the woman rejects the feminine nature she once identified with in favor of more masculine traits. This is often in an attempt to gain power and position in a patriarchal society. One of the antagonists in the beginning of the comic, Sophia, can be seen as the feminine entity from which Maika must distinguish herself. Typically, the separation from the feminine is in the form of separating from the mother figure (thanks Freud!). Here, we can interpret it a little more loosely as symbolic rather than concrete. Sophia is gorgeous, beautiful, and embodies elegance commonly associated with femininity. (Sophia herself seems to want to separate from the feminine, namely her mother Yvette Lo Lim, that does not support her claims.)

With a brief mention of Maika’s mother, Moriko Halfwolf, we are transported into a flashback that suggests that Maika was not yet ready to physically separate from her mother. Yvette is somehow responsible for a premature separation, one that could influence how Maika approaches femininity throughout the series. One such example is presented in issue #2 where Maika engages in feats of strength, an event typically connected to masculinity. Whether she is aware of it or not, there is a separation driving her actions. 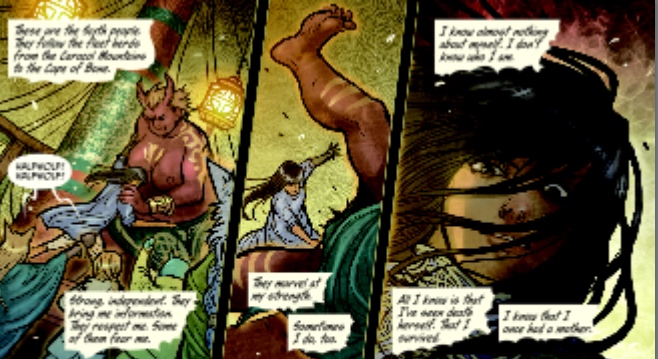 The gathering of allies helps to shape how the woman will approach the problems she faces on her journey. Ren the cat and Kippa are two allies Maika gathers early on in her journey. Their devotion seems tenuous at first, but their admiration of her devotion to the plight of the Arcanics creates loyalty in them for the time being. Maika’s interactions with these two characters should be carefully considered as we move forward.

In most women’s lives, the Road of Trials is primarily conflict with societal expectations. Maika’s are likely going to be more concrete than that. She will fight physical beings that threaten her progress. Maika’s time in the holding cells with the other Arcana can be seen as part of her Road of Trials. The stay is brief, but incredibly horrific. The witches eat and experiment on the Arcanics, and Maika must surpass this obstacle to overcome them and their practice. 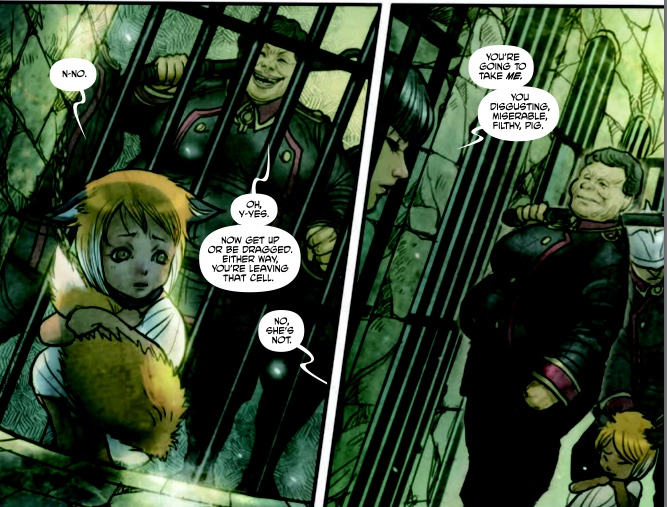 There is a moment in the first issue where we learn that Maika has tried to kill herself at one point in her life. It is unclear at this time whether that was out of sacrifice for a greater cause or due to personal distress. If sacrifice, we can interpret it as an obstacle on her Road of Trials. If personal distress, the Descent.

The Descent is typically interpreted as a natural depression that women undergo at one point in their lives or another. Again, this story presents the journey more concretely than we would normally see in therapeutic sessions. Maika’s Descent may be related to the brand on her chest and the brief transformation we saw at the end of the first issue. Something inside of Maika is causing distress, which she will need to address directly to continue on her journey. This monster within her will likely be a main focus of the story, one that we will continue to circle back to as the comic series progresses. 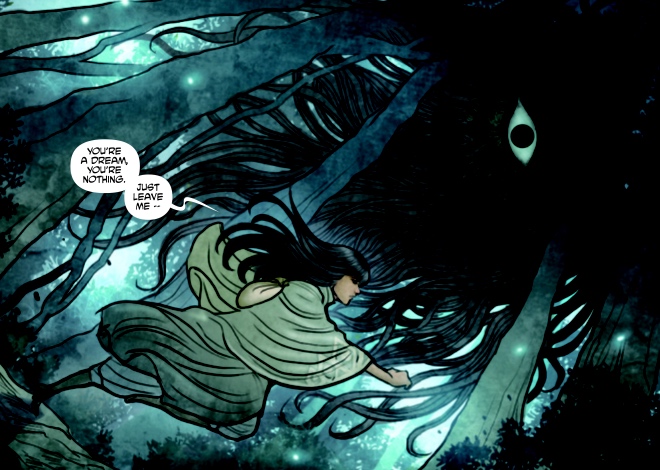 As we progress through this series, our interpretation of Maika’s actions and reactions will likely change as we learn about her and her inner monster. Until our next installment, please share your thoughts on this series and Maika as a character. I would love to see this character from your perspective.