WE ARE SO CLOSE! In just a few weeks, Star Wars: The Force Awakens will hit our screens. Fans all over the world will lose theirs minds, and I will probably cry uncontrollably. As usual, we have the excellent comics from Marvel to hold us over until the premiere.

Showdown on the Smugglers’ Moon 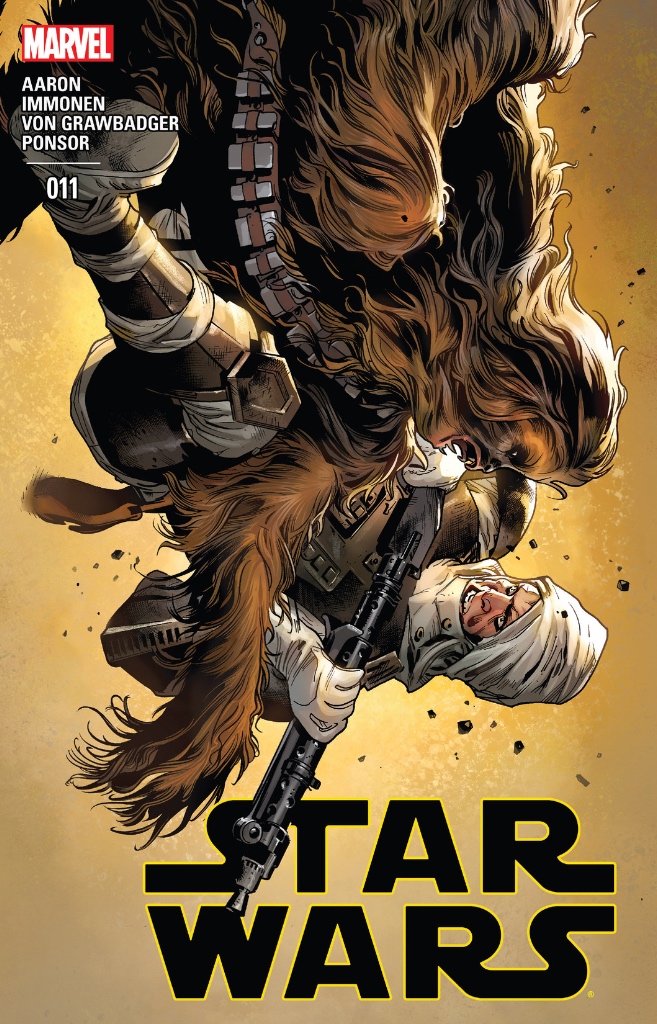 It isn’t everyday we see Dengar on the cover of a Star Wars comic, especially in such an awesome, dynamic pose. We definitely get the gist of where this issue is going. After gathering intel from the Gungan in issue #10, Dengar decides to hunt some Wookiee to collect the bounty on Han. Poor Chewbacca; he’s just on Nar Shaddaa with C-3PO to find Luke and rescue him. He didn’t sign up for a fight!

One of the cool things about exploring the Star Wars universe outside of the movies is the opportunity to see just how badass some of the characters are. In Chewbacca’s case, we hear tales of Wookiees being aggressively strong and primal. We don’t see a ton of that in the movies, which may attribute to why people hug Chewie when they see him. When his – and Han’s – life is in danger, Chewbacca unleashes the Wookiee rage and comes out swinging. 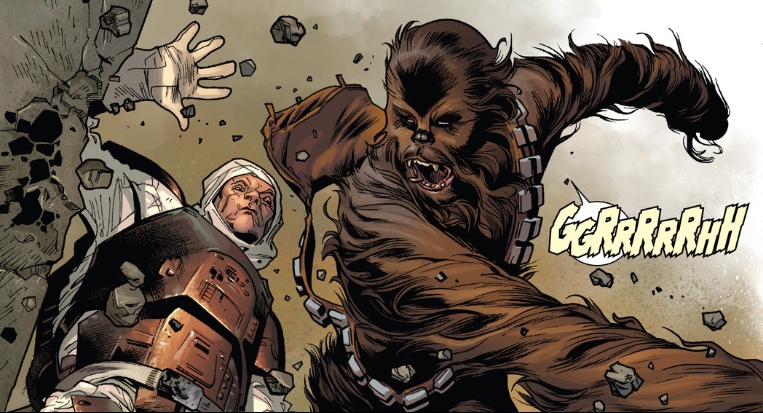 Luke is totally over his head. First, he loses his lightsaber. Then, he’s captured by Grakkus the Hutt. Next, he’s forced to fight a Rancor. Fortunately, we don’t have to worry about what’s next since all of our main characters are converging on him. 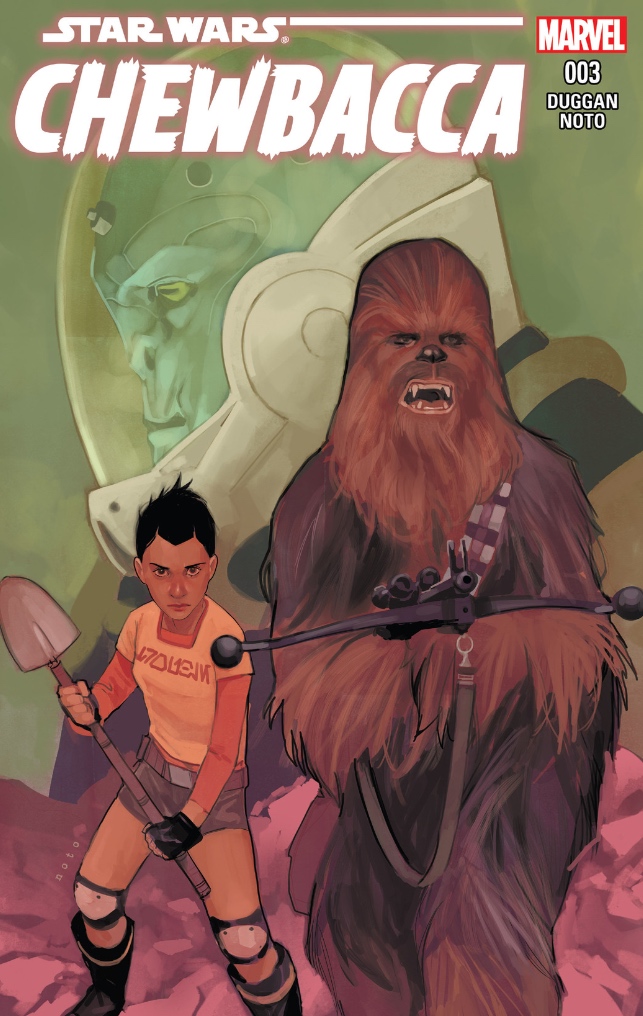 Not going to lie, the Chewbacca comic has been my least favorite of the Star Wars line. That’s ok; it’s still a fun book, even if nothing really happens. We see the raw strength of a Wookiee, which is pretty cool. The most important thing from this issue is that it is very likely that Chewbacca will have a run-in with the Empire soon… 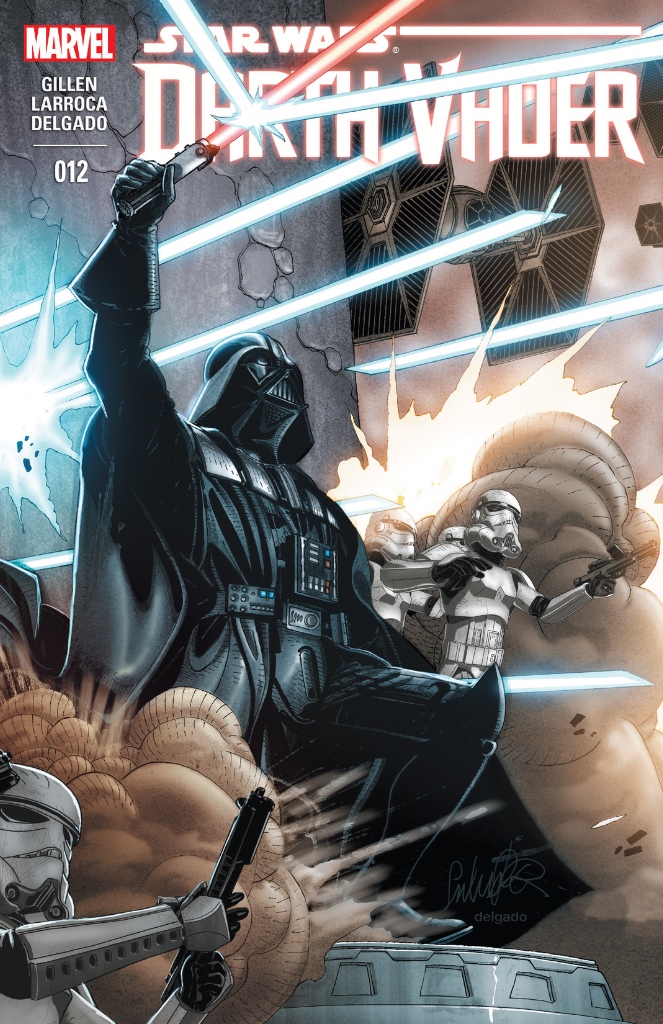 Ever have that character you want to protect to the best of your abilities? Dr. Aphra is that character to me. Yes, she is fully aware that her involvement with Vader will eventually lead to her untimely death. Inspector Thanoth, ever the pragmatist, recognizes that the events after the Ante’s death will send the Plasma Devils out into the open. One thief, or the Plasma Devils…the choice is easy.

It’s a choice I’m grateful for, since we get a quick glimpse at Vader taking down a Y-Wing in flight with his lightsaber. A little bit of Vader Down foreshadowing, it would seem! 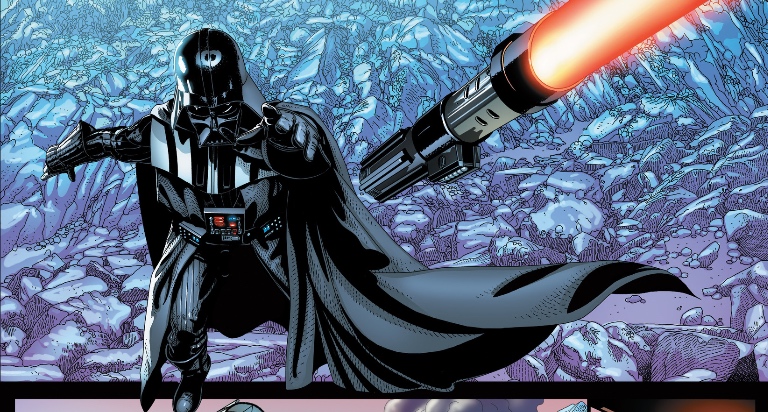 Speaking of Vader Down, it would seem that Aphra is being used to destroy Vader’s position. Remember those Cylo pseudo-Sith-fighters Palpatine was gathering back in the last arc? Well, they are still out to take down Vader.

Showdown on the Smuggler’s Moon 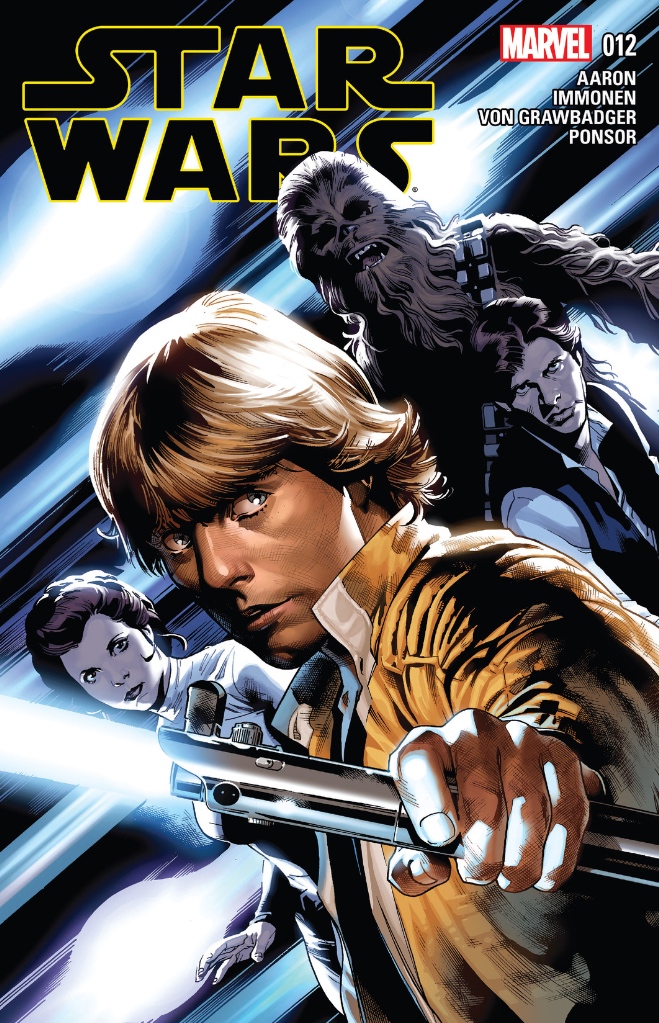 Reunited and it feels so good! Han, Leia, and Sana make it to Nar Shadaa and distract Dengar long enough to let Chewbacca fling him over the side of a building with an activated detonator. Yeah, he’s going to take that well. 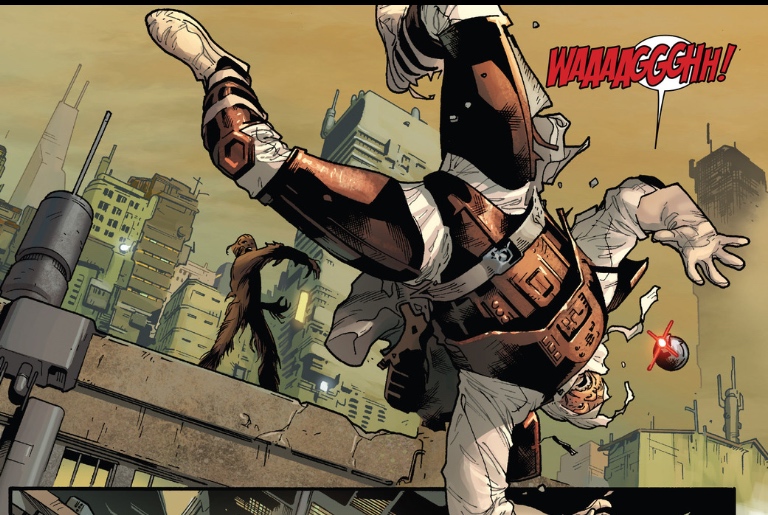 Luke is looking pretty screwed in the hands of a rancor. Not only that, but the Empire has arrived, looking to take down Grakkus and take in Skywalker. Due to Grakkus’s forward thinking, none of the blasters work in the arena. As the Hutt moves through the Imperial forces and kills soldiers, R2-D2 finds a small stash of Grakkus’s lightsabers.

Every fangirl’s dream comes true when she sees Leia wield a lightsaber. She’s “always wanted to try one of these”, and exudes grace and athleticism as she battles her way through enemy forces. Nothing is more satisfying and delightful as seeing a panel where Leia, eyes closed, clears out rubble for a fallen comrade using a lightsaber. 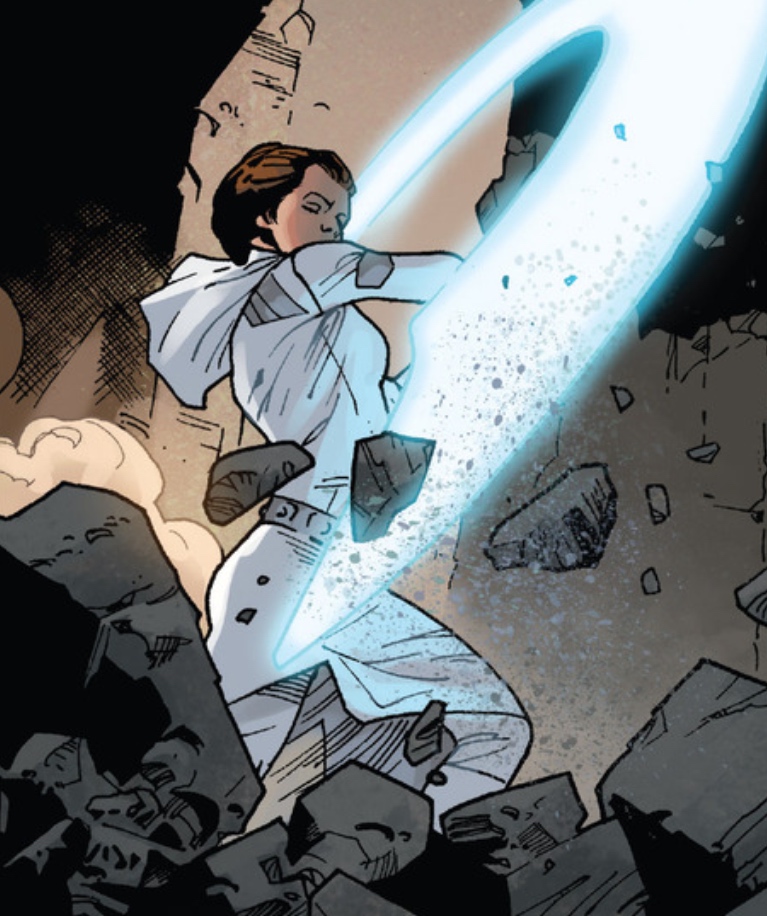 One last plot point neatly wrapped up in this issue…the legality of Han and Sana’s marriage. I can’t say that it’s surprising, but it was an awesome little twist while it was a major concern for our characters.

The information gathered by the Gamemaster is incredibly valuable to Vader, especially since it directly relates to Luke. Even though we see Vader maneuver behind the scenes in both this series and Darth Vader, we can still tell that the true identity of Luke Skywalker is haunting him. It is frustrating that he does not know for sure, and the build up of evidence is killing me.

Vader Down (One Shot) 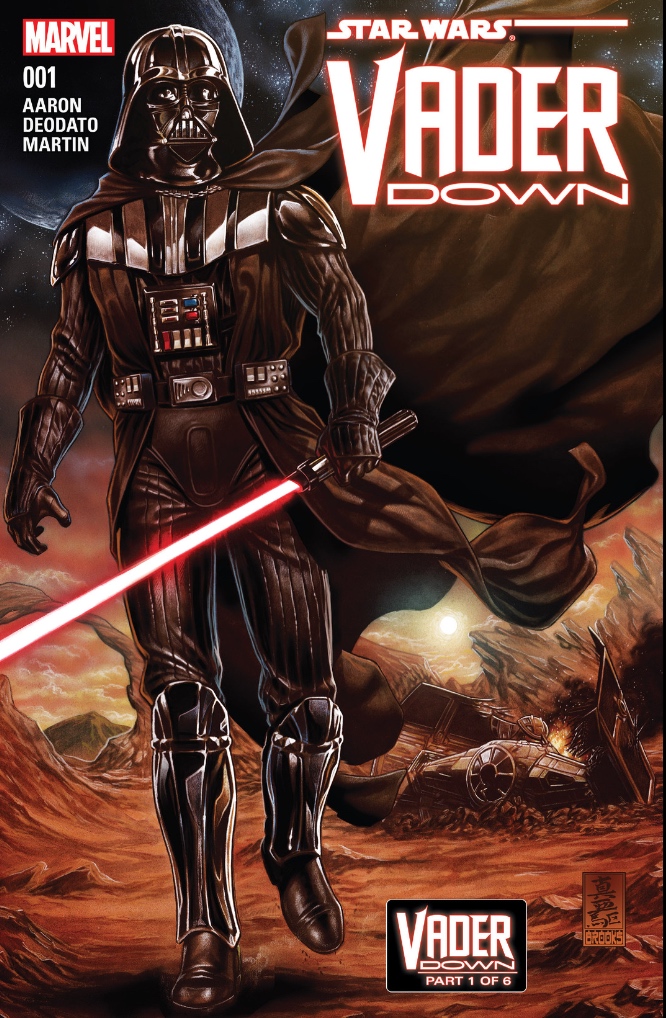 With the information from Aphra regarding the location of Skywalker, Vader is heading to Vrogas Vas. As we’ve learned from Darth Vader #12, he’s being betrayed. Commander Karbin, the Mon Calamari Cylo, was assigned to find the “boy who blew up the Death Star”. With the competition for the Emperor’s #2 spot growing more likely, he would never pass up an opportunity to facilitate the elimination Vader.

Vader stumbles upon three Rebel squadrons running maneuvers, in what looks very much like a trap. The Rebels, however, are incredibly surprised by the lone TIE fighter that abruptly comes out of hyperspace right outside of Vrogas Vas. They do their duty: destroy the Imperial ship. 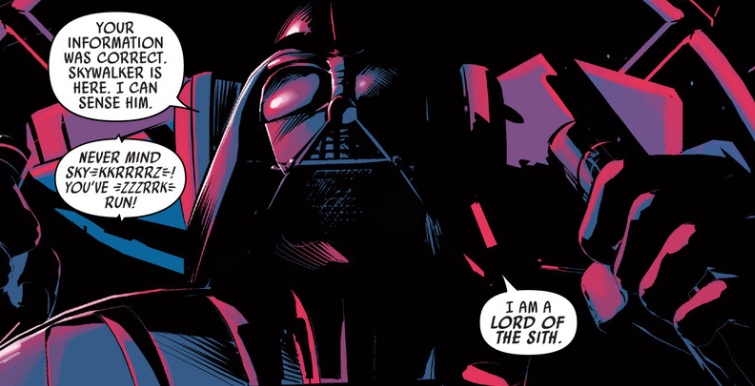 Vader does what he does best, which is mass destruction. Those of you crazy about Star Wars Rebels already know just how formidable Vader is behind the controls. It’s so easy to forget that the gifted pilot and Jedi we see in the prequels is the same Sith Lord of the original trilogy. His menacing gait and reserved moves mask his deadly potential. In a few panels, Vader reminds the Rebels why he is the Emperor’s right hand.

Luke is out among the X-Wings, and he quickly realizes that Vader is the pilot. Unlike the other Rebels, he knows exactly what Vader is capable of doing in space. The only viable option the Rebels have in stopping Vader is to go on a suicide mission. Luke crashes his X-Wing right into Vader’s ship, and the two of them land on Vrogas Vas.

With Vader downed, the Rebel fleet amasses on his position. Much like the Lords of the Sith novel, there is a great need to assassinate the higher officials of the Empire. With Vader gone, there could be instability in the Imperial forces, as well as uncertainty of the invulnerability of the Empire. This mission could make or break the Rebellion.

Which is why we’re getting a six-issue crossover! 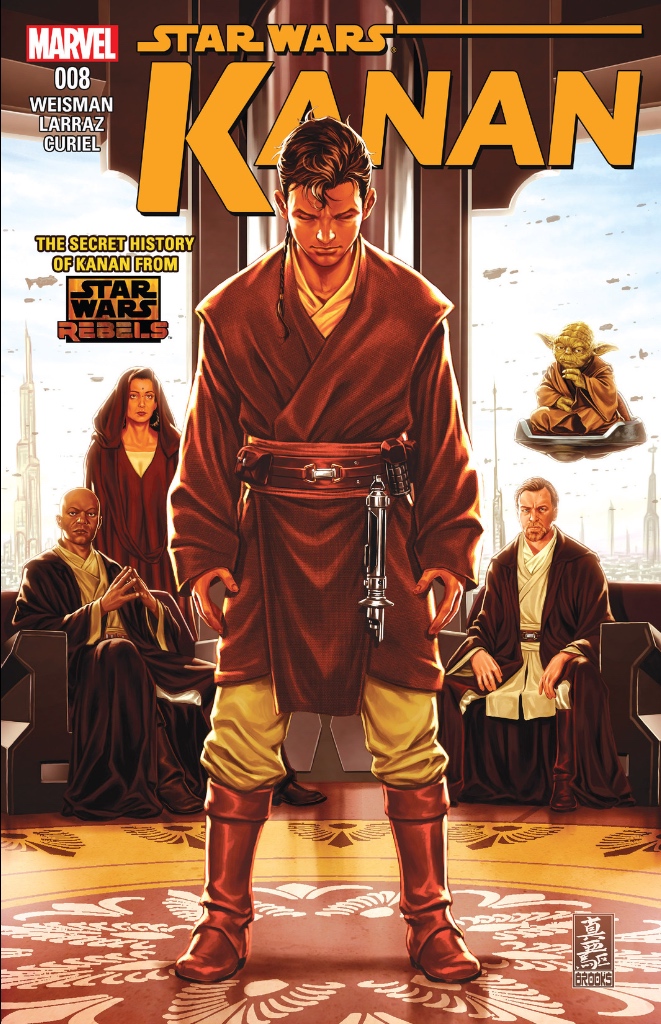 I absolutely love how Depa and Caleb were first introduced. This Jedi Master, who is on equal ground with Yoda and Mace Windu, is portrayed as vulnerable. She models the arduous process of regaining skills and prestige, and she picks Caleb as worthy of passing down her knowledge. The two of them seem to hit it off pretty amazingly. In what appears to be an inadvertent test of their trust, the Temple is under attack.

We cut to a man, General Kleeve, who states that the Jedi “have sided against liberty. Against justice.” I immediately thought of the final arc of season five of The Clone Wars. At first, I thought this to be a regurgitation of that plot. What’s more, I’m having a hard time placing this event. I assume this event to happens before the bombing of the Temple in season five, but I could be wrong in placing the ages of Kanan and Ahsoka. Regardless, we learn that dissent with the Jedi occurs within the Order and outside of the Order. The Jedi have a serious PR problem.

Caleb is determined to help, though Billaba is still unsure of her ability to fight. Caleb makes the decision for her by rushing into the fray, leaving Billaba little choice but to aid him in fighting the mercenary. The end result? A Depa Billaba framed by flames as if a phoenix rising from the ashes, protecting her Padawan, and doing the impossible. 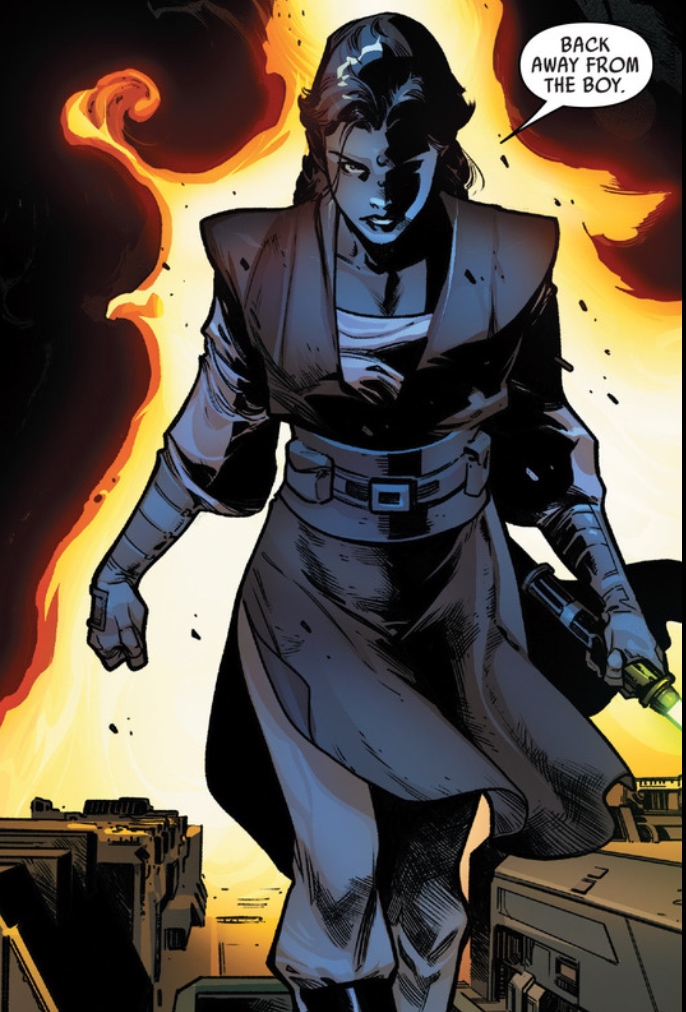 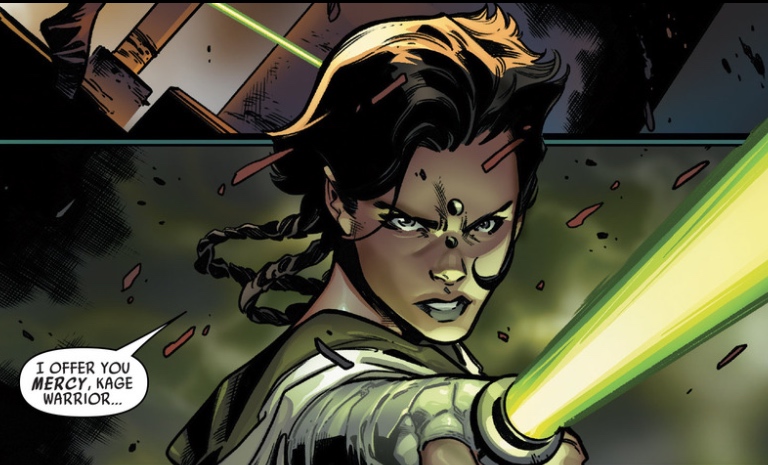 I love this comic. I honestly believe that Kanan is the strongest Star Wars comic, and that is open to friendly debate. 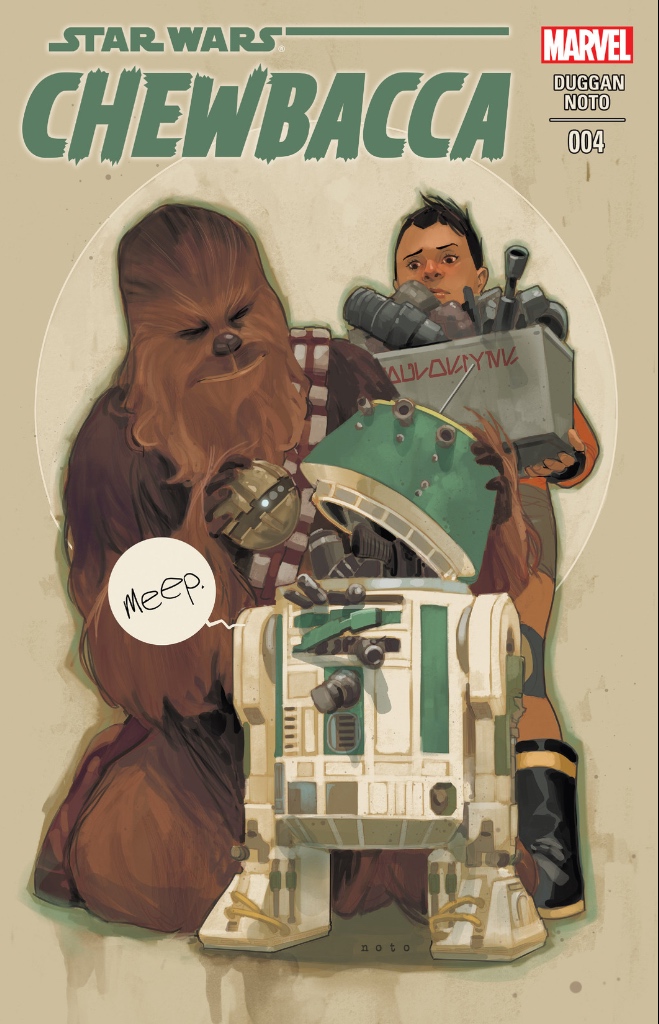 One more issue of the Chewbacca miniseries, and we are seeing more and more interaction between Zarro and Chewbacca. She is starting to understand more of his nonverbal communication, and it is so sweet.

Primarily in this issue, the pair go after an Imperial shuttle in an attempt to take down the infiltrating troopers. The Chewbacca miniseries has primarily been a fun, action-filled romp that is really self-contained. Not my favorite, but there is still one last issue! 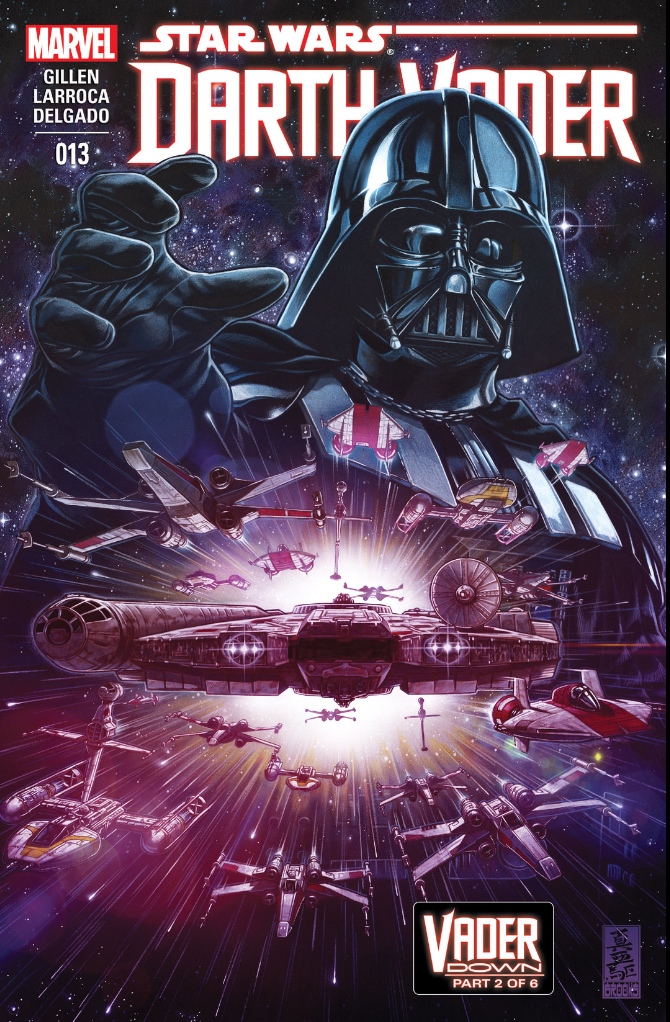 Vader is absolutely frightening in this issue. He uses the Force to pull the pins on grenades. He takes down a tank with his lightsaber. He doesn’t even blink when surrounded by soldiers. Vader is the murderer in those horror movies that walks slowly to kill you, but always seems to be right behind you.

Surprisingly, in this Darth Vader comic, Leia has some great motivation moments. Vader represents all that is evil in the Empire. She had personal dealings with him, and he was there when Alderaan was destroyed. Killing Vader would bring hope back to the Rebellion. When her team locates Vader, we cut to her in the control room, a strand of hair from her famously perfectly coifed updo, falling onto her face. Could it be that Leia is losing her cool?

Dr. Aphra, realizing that her own life in is danger since she gave Vader the intel on Luke’s location, rushes in to help Vader. For a brief moment, it looks as if she and Han have some sordid history. Oh boy, another Sana conundrum! (I certainly hope not; I want them to be rivals!)

Luke has some insight while on the planet, despite Vader’s rampage through Rebel forces. He gets a sense of Ben and Anakin, and you can see the astonishment on his face when he realizes he can feel their presence. It’s incredibly touching, and cut short by Triple Zero masquerading as Threepio.

Also this month: Battlefront! And new Battlefront book! And a Battlefront tie-in story in the Star Wars Insider issue from November.

ARE YOU READY!? DECEMBER 18TH IS FAST APPROACHING.