Art and Colours by Javier Rodriguez 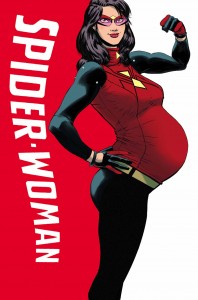 When Marvel announced that Spider-Woman was coming back after Secret Wars, I was ecstatic. Despite the rough start, this series really came into its own with Dennis Hopeless and Javier Rodriguez at the helm. But I’ve been a really big fan of Jessica Drew for years so when I heard that she was coming back with a baby on the way, I was more than a little apprehensive. After all, Jessica Drew would be the first to admit that she’s not the maternal type. Knowing that aspect of her personality made this gimmicky comeback all the more suspect but the series kept the creative team and they impressed me so much that I was willing to read this relaunched title with an open mind.

Thankfully, Hopeless has a great grasp on the character and within the first few pages, manages to address the same fears that I had with Jessica’s own narration. I really liked the way this issue focussed on Jessica adjusting to her new normal. She’s not giving up her PI business, choosing instead to trust it to an unusual substitute. She has a family of heroes that supports her and it’s great to see Hopeless really embrace almost all aspects of Jessica’s life. I love the moments between Carol and Jess. Carol is over-protective as future-godmother but she lets Jessica have her space and control.

My only small concern with this issue is that it’s a number one but there are a couple of things that draw from Hopeless’ first run on Spider-Woman. Her PI business and her partnership with Ben Urich and the Porcupine all started in that run. New readers might not have the same emotional resonance with their scenes together. Luckily, I don’t think it will be too much of a problem because with the eight-month jump, new and old readers alike are in the same boat and it still reads well for a first issue.

Javier Rodriguez’ art and colours are still spectacular but there are moments that take me out of my reading. Some of Carol’s facial expressions look off in a scene between her and Jessica. I know it Carol was supposed to be smiling in support but the way it was drawn with her eyes completely shadowed makes it look really creepy. That was really my only nitpick art-wise because Rodriguez does an amazing job otherwise, especially on colours. The atmosphere is completely set with the colours he adds to the panels. Whether it’s the intense building fire or the light from Jessica’s zappy powers, Rodriguez is a master at lighting. You could feel the heat of the flames, just by seeing the light reflected on someone’s face.

Verdict: Check it out! Spider-Woman #1 is fun, light-hearted, and warm (and not just from those brilliantly coloured flames!). Jessica has had a tough go of things in the last decade and one would think that this unexpected pregnancy could be another straw but it’s not. I love when superheroes are given the chance to change and grow. From her new costume to her new day job, Jessica Drew has made leaps and bounds and having a baby will definitely not slow her down.