What are we capable of now? What can’t we do? 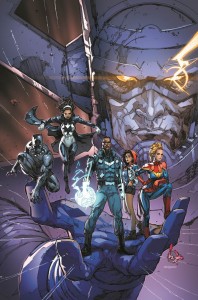 In the first few pages of the Ultimates #1, Blue Marvel talks aloud to himself and asks these questions. When we see that double-paged spread that shows the wonders of Marvel’s multiverse, it’s easy to get swept up in Blue Marvel’s wonder at his universe’s new lease on life. As Blue Marvel describes, this team is about solving the universe’s ultimate problems and with Galactus on the cover, you can bet they’ll be starting with a problem of Galactic proportions. Despite our knowledge, or lack thereof, due to Secret Wars delays, the cosmic mysteries presented to us in Al Ewing and Kenneth Rocafort’s the Ultimates #1 are exciting and invigorating.

The team is just ridiculous in terms of strength. Ewing’s bringing us the smartest with Blue Marvel and Black Panther and the heaviest hitters outside of the Hulk with Captain Marvel, Monica Rambeau (aka the former Captain Marvel), and Miss America Chavez. By sheer abilities, this team is just insane in terms of power-sets and Ewing makes us feel that power through each of their spotlighted introductions. Blue Marvel gets to show off his intelligence (and his impressive age). Black Panther radiates his power as the leader of one of the most advanced countries on the planet. Carol is the cosmic pilot of the bunch, while also proving she’s a powerhouse when facing threats. And Miss America Chavez and Monica Rambeau also get their chance to display their unique skill sets and special abilities as well. The fact that Ewing can have all of these different personalities  play off each other naturally and still come off as distinct characters makes this issue really special. The possibilities for fun and excitement with this team are endless and I’m so excited to see how this mission in particular plays out.

It’s Rocafort’s art though, that really brings these characters and this book to life. The layouts are super fun and dynamic, never really following the traditional all rectangle/square panel spread. In those opening pages, when Blue Marvel is explaining the new status quo for the multiverse, the double-page spread is full of these colourful cubes. Each of them shows a mini glimpse into different universes. A lot of the panels in the rest of the issue seem to mirror the different angles and sides of those cubes we see on those pages and it just goes along with that theme of limitless exploration.

Verdict: To quote a famous 2000s boy band, I say BUY BUY BUY! (That’s how the song goes, right?) To say that I enjoyed this issue is an understatement. In addition to having some of my all-time favourite Marvel characters, this issue really highlights a lot of what made me love superhero comics in the first place. Honestly, even though it’s not officially an Avengers title, it’s my favourite one of the new team books so far. There’s a giddiness and excitement here that feels really refreshing and new and I can’t wait to read more!