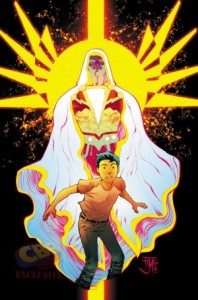 I am so conflicted!

Anyone following along knows that I am a Shazam-o-phile beyond measure. Oh, I have been watching like a hawk as DC has released one-shot after one-shot of Captain Marvel and the family. Multiversity and Convergence, both stunning outings of the Captain, capturing the spirit of the Big Red Cheese and his pantheon excellently, and without the stink of nostalgia. Now we have The Darkseid War: Shazam one-shot … and I am conflicted.

(There may be SPOILERS below. I don’t know. Who can keep track?)

The Darkseid War: Shazam picks up right at the point in the main line where Darkseid has died and because of this all of the Gods that give Billy Batson his Shazam-i-tude are swept away (that would be Hercules, Atlas, Zeus, Mercury, and Achilles. The S is for Solomon, an old testament prophet and king, and very likely a historical personage … yeah, how does that fit in?) Scrambling at the last minute, the Wizard seeks replacements for Billy, other Gods for the gig. He does line up a list of deities who can be mnemonically arranged to SHAZAM, and these are the voices Shazam (our hero) hears in his head on the opening splash page.

I guarantee you haven’t heard of these Gods, and I’m not going to list them because it wouldn’t make a difference. The story has Billy/Shazam meeting these Gods and, to some degree, putting them in their place. They will not be the passive gift givers he’s used to. No silent partners here. They have motives and character. The issue was damned interesting and really very good.

But I was still grumpy. “Grrrrr.” I tweeted. Am I just afraid of change? Is that it?

Maybe. I have learned to cope with the fact that — in continuity — he is no longer Captain Marvel; he is Shazam (thank you New52). And the new costume … is really cool! (I know! I didn’t want to like it either!) But it is a Kirby-tastic rendering of Shazam plus the New Gods and …

I really like it. As long as Shazam stays “The Good Guy” of the DC Universe — the guy who told off the JLA when they started getting shady — I will follow the tale.

Assuming … of course … there is one. (Please, DC? Continuing series?)