Greetings friends, gather round, I’ve got a few questions for you. Do you enjoy a good bit of human-on-human carnage? Have you found yourself unable to identify with the stories and laws of religion? How exactly do you feel about uncircumcised cock wagging to and fro in the name of blood and revenge? What’s that? You’re enticed by all of the things I’ve just mentioned? Well then, has Jason Aaron and r.m. Guera got a comic book for you! 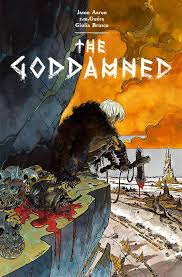 The Goddamned #1 is an exercise in graphic visual storytelling, with enough blasphemy, mystery, and broken bones to satiate even the most indulgent of sadists. Our story takes place 1600 years after the children born of Eden (Cain & Able) have been cast out by their maker, and left to wander the desolate sands of an Earth ravaged by greed and territorial pissings. You’re going to need a shower after reading this comic, lest you want your eyes to be caked with shit and stained with the brain matter of your fellow man.

What we have here is a solid beginning to a tale of vengeance that takes what you know of “the Good Book” and sets fire to its pages. Those who’ve aligned themselves with a particular religion in life might find Jason Aaron’s The Goddamned a might vexing as it comes off as not having enough middle fingers for the big man in the sky – and it’s that hated that drives our main character. That said, I would remind you that we have yet to learn of the details of Cain’s banishment, and perhaps, by some questionable act of God, his spite and rage is warranted.

Not to be forgotten, r.m. Guera’s art is as filthy as it is a perfect fit for this tale. We’re walking within a wasteland, here. A mass of dirt, toxic waters, and spoiled foliage. So of course the characters that we meet are going to look a might grizzly, their hair knotted and clumped from months most likely years of neglect. All of this comes together in a perfectly wretched presentation of what happens when humans loses his way and embrace the ways cannibalism, slavery, and rape as their new religion.

Verdict: The Goddamned #1 is a blasphemously good read! I couldn’t help but find myself mentally holding my nose at the stench of r.m. Guera’s wasteland, or grinning ear to ear as I found comfort in the mystery and motivations of the book’s protagonist.  It’s a solid first issue that, for those who aren’t put-off by its harsh view of “the man upstairs” might find themselves counting the days until they can walk with Cain again, in wonderment and sin.