All-New Wolverine might be the most appropriate tile for this comic, and I mean that as a good thing. Laura is not Logan, but with his DNA and in that costume, who could care? Of all the candidates to carry on the mutant-ronin’s mantle, she seems the most appropriate. Luckily for us this fact is cemented through Tom Taylor’s dialogue and characterization and David Lopez and David Navarrot’s stunning cartooning. This first issue has all of the potential for becoming a surprise hit series. 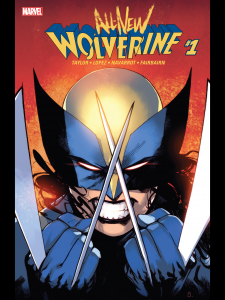 Establishing what will become the first arc, the issue follows Wolverine (yea, I’m having to get used to calling her that too) as she hunts down members of an assassin-sisterhood that shares more than a few similarities with her. There is enough revealed in the first issue to entice, but plenty held back to set up what looks to be a fun and personal mystery. It’s nice when a series has so much focus in its inception.

Building off of the “All-New” of the title, Laura’s Wolverine will be unique to Logna’s while mainting what it means to have the codename. This is presented by dream sequence and with the subconscious appearance of Logan. It may not be too subtle, but the scene’s sentiment feels like the passing of a torch, or at least a blessing until the Canadian-Avenger’s inevitable return. As nice as the scene is, I hope that there aren’t many like it to follow. Laura is a great character deserving of her own title and it would be unnecessary for Logan to be reduced to a crutch.

If the series will have much of a supporting cast, it isn’t demonstrated in the first issue. This isn’t a slight because it would most likely have interruptted the momentum presented. We are given an appearance from Angel, or Warren, Laura’s time-exiled boyfriend from Bendis’ All-New X-men. He is a solid foil for her character, and even the cliché of the opposites attract relationship is presented in cleaver ways. Angel never overstays his welcome and never detracts from the protagonist. A perfect supporting character and a testament to some solid comic book pacing on Taylor’s behalf.

I fear that I might be over-complimentary towards Taylor’s storytelling, but I can’t be blamed when it is paired so well with Lopez and Navarrot’s illustrations. This art team is excellent. Lopez’s sense of action brings the best out of a fight scene and his facial work makes dialogue feel dramatic. He is the perfect kind of collaborator because he brings the most out of a script, especially with the assistance of Navarrot’s design work bringing a ton of character to the world the team is establishing. Also, I’m not sure who is responsible for the design of the costume, but it looks both fresh and nostalgic.

As much as I thought All-New Wolverine was a top-notch issue, I can’t ignore the extra price for admission. Five dollars is a lot to ask for what was a pretty straight forward story, albeit well-crafted. It’s hard to criticize such impressive splash pages, but it feels like four were too many and not at all worth the extra dollar.

VERDICT: In Marvel’s defense, if what is given in All-New Wolverine is the new standard for the company, it will make paying that extra dollar in the future a little less difficult. For now, it is a lot to ask, but at least it’s some solid comic book narrative. Oh, what the hell. Splurge this week; you won’t be disappointed.