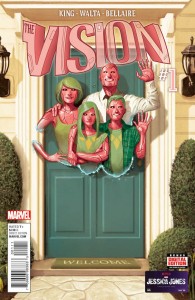 After watching the Avengers: Age of Ultron movie months ago, I wondered when the inevitable solo series would come out and just how Marvel would even approach a Vision comic book. To say that I was pleasantly surprised by the first issue is an understatement. Truthfully, I wasn’t even that eager to check it out even though I picked it up but when I got to my store on Wednesday, my boss practically ordered me to read it as soon as I could. Boy, am I glad that he convinced me to give it a shot! It’s a very different kind of superhero story. We’ve had years of seeing the Vision as a superhero. Here, we have the Vision just trying to create a family. With that take in mind, King, Walta, and Bellaire are weaving an incredible story that comments on the very paradoxical aspects of human life.

Shortly after the Vision purges all emotions connected to his memories (see Avengers #0), he moves to a suburb in Arlington, Virginia with a newly created family. King smartly interweaves social commentary through the narrative from the very beginning when the comic opens with some neighbours visiting their house. The husband’s blatant prejudiced comments about the Visions to his wife are so familiar that it settles you into this as an outsider story. But just as you get comfortable with the story, the narrative shifts from this familiar trope as the narrator begins to describe what happens to those neighbours “at the end of our story.” It’s chilling and disturbing but it immediately sets the Visions’ story as something else entirely.

Having Walta on board for art was a brilliant move because he’s so perfectly suited for King’s odd and slightly sinister suburban superhero story. He imbues the Vision family with an inherent and distinct superficial visage that makes it difficult to really relate to them. Although it is something that we’re familiar with because of the original Vision, it’s jarring to see it all in a family unit. Seeing them all together in the opening pages as they open the door to welcome the neighbours is so deliberately uncomfortable and I love that unsettling feeling I get when I read these pages. The fact that Vision so desperately wants to fit in and better understand the human condition makes the deliberate distancing all the more tragic. The end fight scene is also incredibly well done though I don’t want to spoil too much.

Verdict: BUY. Tom King and Gabriel Hernandez Walta blew me away with their take on the Vision and his newfound family. Since the first round of Marvel’s All-New initiative, their superhero titles have really expanded to incorporate and fuse different subgenres of the medium. The Vision really feels like a Boom! Studios thriller wrapped in a Marvel package.