What could be cooler than James Bond in comic book form as written by Warren Ellis?  Sadly, with this much promise, there is little pay off in the premier of this six issue mini-series. It’s been nearly two decades since the last Bond comic and any creative team should be allowed a few concessions when tackling MI6’s most famous agent. Sadly there is only enough in this first issue to make me feel obligated to buy issue two and hope for the best.

The book never decides if it is either presenting the charismatic jack of all trades movie-Bond or the more dangerous psychotic Fleming-Bond. As many similarities as the two can have, this book demonstrates why you can’t have both at the same time. Maybe as the series progresses the character will become more consistent, but mini-series rarely receive the luxury of correcting any missteps from its first issue. Especially if the first issue is as brief as this one is. 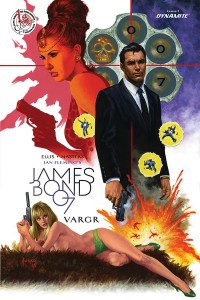 VARGR wants to mark off the classic beats of a James Bond story, like flirting with Moneypenny, being briefed by M and receiving his gadgets from Q. What is used by the movies as exposition for the audience to build a framework for the story doesn’t quite work in six pages in a comic. I was left more confused about James’ mission by the end of these scenes than I think the creators had intended. Also, I know it’s fun to present James with limitations like taking his gun away before the mission, but if there is no justification, then its more distracting than cleaver. Even though the pacing and the character are a bit of the mess, Ellis excels at dialogue. The conversations are engaging, but never quite feels like Bond.

Mechanically the comic falls short as well. Jason Masters is excellent at illustrating a good fight as shown in the beginning pages (the issue’s all too brief highlight), but when it comes to the more relaxed conversational scenes, there is too much focus on emotion in Bond’s face. Call me old fashioned, but Bond should never look like he’s about to do a spit-take, unless Roger Moore is being channeled, but I hardly think that that was the intention. Also the conversational scene I’m referencing takes place in what I assume is MI6’s cafeteria. Yes, I’m sure that MI6 has a cafeteria, but surely that is reserved for the secretaries and the IT team, not Jame Bond. If Bond is eating a meal that cost less than one of my car payments, then that isn’t the escapism that I usually like to get from my 007 stories.

Verdict: As much as I’d love to cast off this comic, I can’t. I read the first issue, and there is still enough Bond there to keep me reluctantly coming back for more. Just because I’m in too deep at this point, doesn’t mean I will recommend it though.