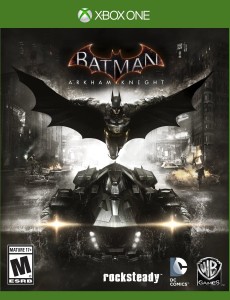 Arkham Knight came out near the end of June this year and with my life being the way it has been, I only got around to playing it recently, which bums me out but such is life. My point being is that I realize that I’m super late to the party, but I had some thoughts on the game that I wanted to share and I think in the case of one’s opinion, it’s never too late. Unless it is.

Thar be spoilers ahead, y’arrr.

I finished the playthrough of Arkham Knight for Extra Life 2015. I did a absolutely terrible job of being online throughout that event and I failed my team. Thankfully not my city though or else Green Arrow might come after me.

The first thing that I noticed about Arkham Knight (once the damn updates and installations were through…) were the impeccable graphics. I don’t know if I’ve ever seen a game that looks THAT good while you’re playing. The brilliantly constructed cut scenes are almost at the same level as the gameplay itself. It’s stunning and just an incredible work of art as far as that sort of stuff is concerned.

Arkham Knight is also a huge step up from the disappointing Batman: Arkham Origins, which should honestly just being erased from the franchise, in my opinion. Technically it’s a different studio and team so it’s not a COMPLETE part of the franchise but still. The fighting is exceptionally fluid and it’s a lot of fun to get in fights with lots of baddies where you get to use your gadgets and other cool tricks to take them all out.

Pretty much every villain that hasn’t made an appearance in the franchise to date also happens to show up (and several that we have obviously seen). It makes for a fun and nostalgic romp around Gotham.

Ok, now for some of my other thoughts which aren’t so great.

In a time when women in geekdom and especially in gaming are fighting to make their voices hear, Arkham Knight feels like a subtle little “fuck you” in certain ways. Lots of male characters take beatings throughout the story but the women get exceptionally cruel storylines… and “storylines” is a generous word for what they’re given.

Barbara Gordon is in the game as Oracle, having already been crippled by The Joker (in The Killing Joke). It might’ve been fine to just leave things at that and hint at how she came to be that way but the writers had to take it one step further by making us watch The Killing Joke come to life and watch as poor Babs is attacked by The Joker. The implied sexual assault that also happens in the comic is thankfully redacted from the game but it doesn’t make it any less uncomfortable.

From there you would think “Oh ok, we’ve seen Babs take some shit… we’ll lay off of her for a while…” but NOOOOOOOO, the whole game more or less revolves around poor crippled Barbara needing to be saved by Batman over and over again only to show us how smart she is when she doesn’t need protecting (which is often). Additionally, for a good chunk of the game, we’re led to believe that Babs is kidnapped, gassed and is murdered in a pretty horrific fashion. There’s not really any grieving for the character, Batman just moves on in his brooding “OH WELL, THERE GOES ANOTHER ONE” kind of way.

Maybe that’s a bit harsh but I don’t think that her “death” was even remotely as impactful as it should’ve been, despite it all being a rouse. 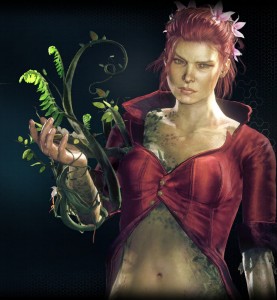 Then there’s Poison Ivy. The Arkham games haven’t been kind to any of the female characters and their “costumes” and this game is no exception. This time, Poison Ivy dons a button up shirt that is several sizes too small, barely covering her breasts and she merely has a pair of underwear on for her bottoms. Literally nothing else. Thanks, dude bros.

From there she gets a pretty decent story of redemption as she teams up with Batman to save Gotham from Scarecrow’s fear agent that’s being spread over the city. After doing more than probably any other character in the story, she is rewarded with death. She saves the day, Batman gets the credit and she dies. Again, no one really gives a shit and we hear numerous baddies talking amongst themselves and being pretty pleased about that situation. COOL.

Catwoman is also in the game. One might be purring with delight at this notion but the notorious femme fatale is being held captive by The Riddler, who has placed a completely degrading explosive device on her in the form of a collar.

One of the coolest characters in the DC Universe is then degraded to being rescued by Batman and tagging along as his sidekick as they try to find keys to unlock the device.

To round things out, the only women in the GCPD that you see are secretaries. There are no female firefighters for the missions involving them and we get to witness Kirk Langstrom (aka Man Bat) accidentally murdering his wife. Talia is dead, Harley acts like an idiotic bimbo, and Vicki Vale is a voice on Bruce Wayne’s answering machine.

For a long time, I turned a blind eye to this kind of nonsense but it’s 2015, guys. This sort of shit is no longer acceptable, which is more or less the same answer that new Prime Minister of Canada, Justin Trudeau, said when a reporter asked him why he chose an equal number of men and women for his cabinet (he really did just say “Because it’s 2015” which is totally baller). If our governments, who are constantly bickering and being morons can come to that conclusion, then creative people who think up entire worlds for new games shouldn’t find it THIS DIFFICULT to have women in their games that aren’t constantly abused.

This isn’t just a problem with Arkham Knight, but unfortunately with this game being the most recent thing that I’ve played through, it’s getting the bulk of my wrath.

At the end of it all, the game was fine, but I was taken SO out of it because of the blatantly terrible way that women are treated here. Let’s make change happen, everyone.