When something comes back to life in the now 34-year-old Evil Dead franchise, usually the aftermath is disastrously horrifying to a degree that makes Pet Sematary look like Ghost Dad*.

Thus, when news broke that the series itself was due for a resurrection as a weekly half-hour Starz series, it wouldn’t have been out of the question for even die-hard fans to imagine that the results might end up being significantly less than groovy. The extraordinarily entertaining balance struck between over-the-top supernatural horror and outright slapstick in franchise creator Sam Raimi’s 1987 sequel Evil Dead II and its 1992 follow-up Army of Darkness is not an easy thing to pull off, and the elements that carved it a special place in the hearts of genre fans have been bungled by scores of lesser filmmakers in the years since. First-time director Fede Alvarez, knowing perhaps that this was the case, abandoned Raimi’s comedic tone in favor of furiously amped-up, mostly straight-faced bloodletting in his big-screen 2013 reboot Evil Dead, and the choice was a smart one that paid off as an intense, mostly successful standalone film. At the time, though, it seemed that the series’ heyday of possessed deer heads, severed hands with upraised middle fingers and action sequences straight out of the Warner Bros. cartoon playbook was clearly over, and perhaps best left dead and buried anyway.

But, leave it to Raimi – a tenacious, energetic filmmaker even in the fourth decade of his career – to show the world that his vision for Evil Dead has a whole lot of life left in it yet. Ash vs. Evil Dead, once again featuring franchise leading man Bruce Campbell in the role that made him a cult hero, offers almost everything that longtime fans could want in a small-screen version of their beloved saga of chainsaws, Deadites, wisecracks and boomsticks. 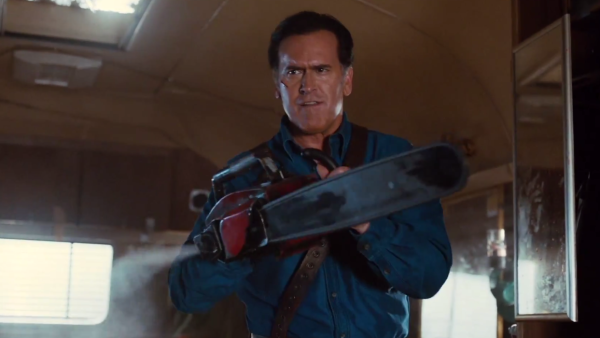 Picking up with Campbell’s jut-jawed hero Ash in the throes of middle age, the series pilot efficiently accomplishes the necessary world-building – admittedly, Evil Dead was never much of a complicated story anyway – while also reintroducing, and very faithfully recreating, the kind of hysterically gruesome action setpieces that the films made famous. The ever-charismatic and rakishly witty Campbell hasn’t lost a step, even though his character has fallen on decidedly rough times; Ash now lives in a trailer park, spending his days working a degrading stockboy job at a third-rate department store and his nights hunting for an easy lay at the local watering hole. He’s apparently held onto the demon-summoning Necronomicon from the films, and before long – as one might expect – some passages from the cursed book get read, the Deadites return to possess people’s souls and wreak hellacious amounts of havoc, and Ash finds himself, at first reluctantly, thrust back into the role of hero.

As predictable as the Raimi-directed premiere episode is, it might just be one of the most successful film-to-television translations to date, a near-perfect synergy of a director and star still completely attuned to the spirit and appeal of Evil Dead and a network willing to let them be precisely as extreme as they need to be. An early scene involving detective Amanda Fisher (Jill Marie Jones), who’s bound to be an integral part of the series’ ensemble, sets the tone: she battles a former gal-pal of Ash’s who’s gone full-blown Deadite before splattering her possessed partner when he gets himself demon-ized. Even before we get to see Ash take action, Evil Dead‘s signature frenzied camerawork, shrieking demons, and chaotic yet deftly choreographed action are fully established. 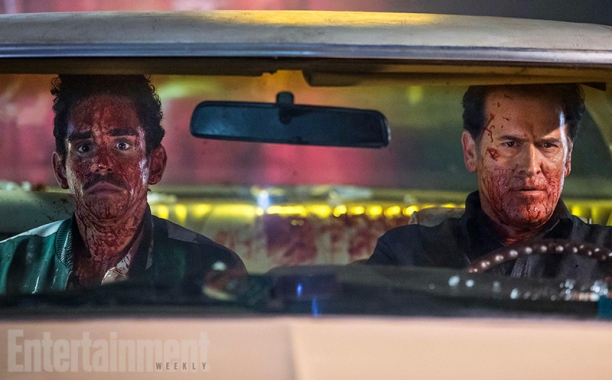 Some fans might bristle at the amount of questionable-looking CGI gore on display, but Ash vs. Evil Dead otherwise so perfectly captures the gritty, cheeky, often handmade feel of the original series that it’s easy enough to overlook. The first episode climaxes in an Ash-centric action sequence that scans as the best kind of fan service, bringing back beloved series elements – and one killer catchphrase – with gleeful abandon and without ever seeming as if it’s simply checking obligatory items off a list. Raimi’s joy at being back in the driver’s seat, with Campbell in tow, is obvious and infectious, and he nails the comedy/horror hijinks as effortlessly as one could possibly imagine.

Of course, it’s impossible to judge a television series solely by its pilot, and since Raimi won’t be going the Steven Soderbergh route of directing entire seasons, it’s possible that the quality of Ash vs. Evil Dead could dip in future installments with other folks behind the camera. A larger, more long-form plot is suggested in episode one, but that sort of storytelling is uncharted territory for the Evil Dead franchise; it’s possible that, as fun as Ash and his many nemeses can be, they might be better served in smaller portions. In addition, the supporting characters – including Ray Santiago’s goofily Ash-enamored sidekick and Dana DeLorzenzo as a tough-minded coworker who gets swept up in the Deadites’ apocalyptic doings – aren’t yet fully fleshed-out, although they’re thankfully not too grating and they’ve got a good sense of how not to upstage our hero.

The bottom line? Fans should be thankful not only that Ash vs. Evil Dead exists, but also that it’s been handled with so much care and enthusiasm. In its first installment, at least, it’s a far more entertaining and successful translation of a big-screen property to television than, say Agents of S.H.I.E.L.D., and although the competition is basically nonexistent, it’s definitely the best blood-spattered horror/comedy series on TV. If it can maintain the tone and momentum that it’s shown so far, it’ll truly be something worth saluting – this is, of course, unless you happen to have replaced your hand with a chainsaw. 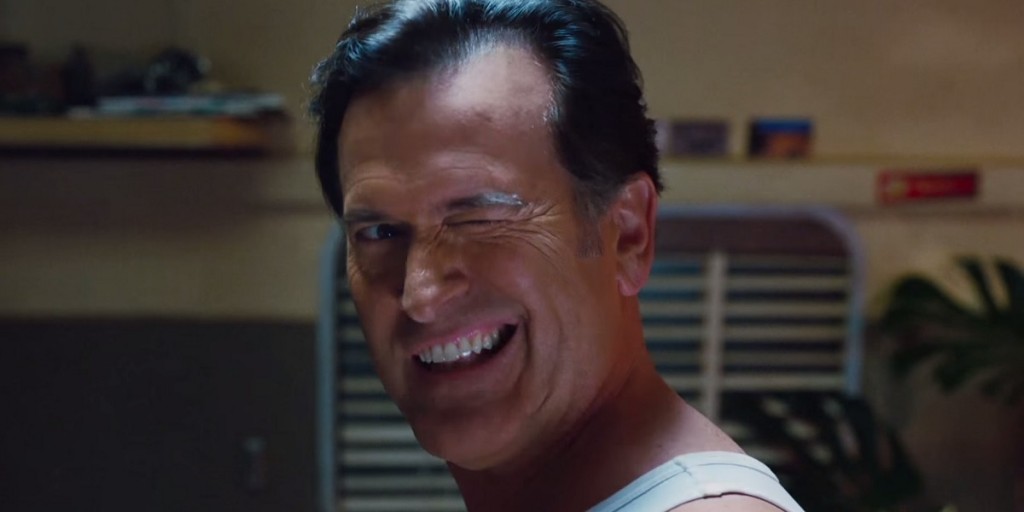