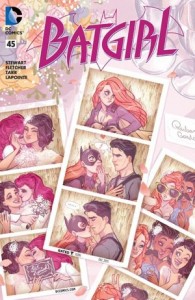 Wedding bells are a ringing and it’s up to our Batgirl of Burnside to make sure the day goes smoothly for her best friend/former roommate, Alysia. And who better to have as the Maid of Honour than Barbara Gordon herself? Taking a well-deserved break from battling Tiger whisperers and Robo-Bat-Bunny Dad’s, this issue reminds us of why the creative change in tone was the best thing to happen to Batgirl since the New 52 reboot.

Barbara is enjoying her life on the brighter side, with her civilian friends and her new boyfriend Luke Fox. But this issue wouldn’t be quite right without a hitch on the day to get hitched and just as the ceremony is about to start, Dick Grayson shows up to whisk the Maid of Honour away! In Grayson #12, Dick had enough of spying on Spyral for Bruce (who’s not even Batman anymore) and went back to Gotham to tell his Batfamily that he’s alive because he needs their help. While Grayson focused on his side of the story, Fletcher and Stewart give Babs the spotlight with their next trip down memory lane and it’s wholly satisfying to see her lay it all out for her former (ALMOST) paramour. In typical Bat-Family fashion, Dick leads Babs away from the wedding (MERE MINUTES before the ceremony) by having her chase him across building rooftops. I love the Batgirl/Nightwing pairing because they have such a great history in the old universe. Also they have great banter chemistry… Banter chemistry is a must. The New 52 rewrote a lot of that history but kept the bare bones for their chemistry and Fletcher and Stewart capture it brilliantly here. I don’t want to spoil too much but it’s definitely a scene that’ll have you cheering for Babs all the way.

This issue took me way longer than necessary to get through because Babs Tarr’s designs for all the characters were so GOSH DARN GORGEOUS. Everybody looks fabulous from Barbara to Alysia to Luke Fox. These outfits add so much personality to the characters and the different designs grounds this as a relatable event (despite the rooftop jumping interlude). It’s no secret that Tarr loves Sailor Moon and in this issue you really get a feel for the shojo manga influence in her work. The shojo feel and layouts are a perfect fit for the wedding because that there’s a focus on all the romantic and intimate moments between characters. The soft colour palette from LaPointe also really sets the mood for the heartfelt and warm tone.

Verdict: BUY! It’s no surprise that I love this series. This is a great look into their personal relationships without all the heavy action getting in the way. Dick and Barbara have an adult conversation about their relationship and where they stand and Barbara gets to have a satisfying moment amidst all the wedding craziness. Romance, drama, chase scenes, and great guest stars make this a must-buy this week!