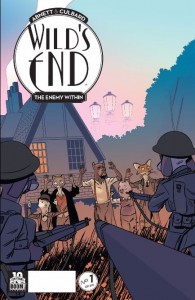 My own history with the Wild’s End oeuvre is pretty uncomplicated. I saw it late (when issue 3 came out), but caught up quickly, and knew immediately that I was besotted. Where else, in the history of comics have the varied sources of War of the Worlds, Foyle’s War, All Creatures Great and Small, and cartoon animals intersected in a lovely, crumpety Venn Diagram of delight?

This is the second Wild’s End miniseries. The story for The Enemy Within picks up almost exactly where the first series ended. Where we are is the town of Wild’s End either during wartime or just after. Our hero, Mr. Slipaway (the great dane on the cover), is a recently returned Naval veteran, welcomed by the town, but still standing alone, taciturn and emotionally wounded. He’s A Good Man (or dog). In the first series, our hero and his crew (including a sly fox and a beautiful, neurotic, chain smoking, mystery-writing cat) encounter an invasion (or the vanguard of one) of … either robots or creatures in robot appearing devices. The single, deadly ray and the tentacle like legs clearly evoke H.G. Wells, and his tripod riding Martians. That story ended with the first sighting of the British army coming upon our bent-but-not-broken heroes trying to make sense of a costly victory.

The first issue of The Enemy Within finds the our Heroes placed into quarantine (imprisoned) by the army, and the entire region cut off from the rest of Britain. No communication out. What’s gone on here? The Army is clueless and unbelieving, and they’re treating our heroes as either idiots or liars. Continued invasive threats are hinted at. And the idea that some sort of quisling traitor is working for the invaders seems to be seriously probable — with the team being prime suspects. What will Mr. Slipaway do? Well, one thing he won’t do is remain passively under the “protection” of the army. Talk of escape starts early on …

Verdict: Buy it, for gosh sakes, buy it! I’m not sure why the conceit of having cartoon animals in the place of humans, doing what humans do, never commenting on the fact that they are, in fact animals, works so well for me. But it does! Maybe, as with Orwell’s Animal Farm, it creates just enough literary distance for me to see this story in a less jaundiced light. Either way, I embrace it. It is funny, but not a farce, and also frightening at the appropriate points, and emotional. You like these characters, and enjoy spending time with them.