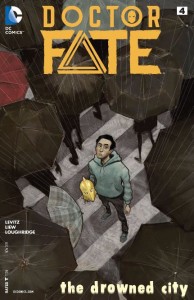 For an issue that serves as the reflective calm between two storms, there is a lot going on in this issue of Dr. Fate. I’ve been impressed by this book since issue #1, but have waited to review because I think it’s fair to give a book some time to show you what it can do. Dr. Fate has been fantastic from the beginning to yesterday. This fourth issue just confirms for me that excellence is a pattern of behavior for Levitz, Liew, and crew.

The issue begins with second generation American-Egyptian Khalid Nassour at his other job, that of being a medical student. It’s still raining outside due to the nefarious nimroddery of Fate nemesis, Anubis, Egyptian dog-shaped god. Anubis, apparently, is angry, old, and powerful. Egyptian cat-shaped goddess Bastet — the one who gave Khalid the helmet of Fate — hasn’t been around for a few issues, and Our Hero is feeling the weight of the demands being placed upon him. He can’t stop the rain! He can’t stop the floods! Anubis is too strong! Khalid has got a wicked case of they-picked-the-wrong-guy.

So Khalid goes looking for advice at the museum where they’ve got a temple to a “bunch” of Egyptian gods, and he prays. So this is one of the many things that’s interesting here. Khalid is a second generation son of a lapsed Christian and an indifferent Muslim. They’ve raised him to be … American. The immigrant experience indeed! This guy finds himself praying to Isis and Osiris.

And nothing happens. Well, not until he looks at the helmet, and it looks back, and then drags him into trippy Helmet-of-Thoth land. The rest of the issue is Khalid coming to terms with his Fate. It’s a masterfully done half of the book that does character as well as a lot of books do plot. Very satisfying and true feeling.

Verdict: Buy it!  From my point of view we have a genuine movement happening here. Babs of Burnside. Kamala of Jersey City. Khalid of Bayside. Spider-woman. There’s a turn happening. Books are coming out that are filled with such an energy … a sort of abandon exists in the art and story. There aren’t many books I keep current on. This is one of them. To quote Khalid, “@#$%! The Sphinx!”