Marvel and Disney have been releasing a steady supply of comics, novels, and other stories, since last winter, to fill in the gaps between Star Wars movies and the void left by the de-canonization of the old expanded universe. With the upcoming release of Star Wars Episode 7: The Force Awakens the companies have avoided stories taking place after Return of the Jedi to give the film creators space to maneuver, and to not reveal too many plot points of the new film. Shattered Empire (along with the novel Aftermath) is one of the first stories to move beyond the original trilogy and begin to fill in the large gap between Episodes six and seven. 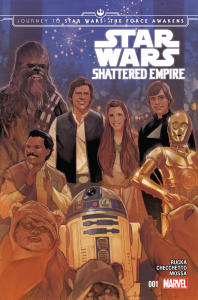 Shattered Empire starts near the end of Return of the Jedi just before the shield around the second Death Star falls. It is in this battle that we are introduced to the pilot Green Four, real name Shara Bey. Shara is the center of the issue and it is clear she is the lead protagonist of the story. During the celebrations on Endor we get to meet her husband Kes Dameron, who was part of Han Solo’s strike team on the shield generator.

Many first issues spend time world building, introducing a multitude of characters, or introducing elements of the plot that will drive the series forward. Shattered Empire is at an advantage in this regard, as most, if not all, of its readers have seen Return of the Jedi and the other Star Wars films. This allows Rucka to focus the issue on introducing these two new characters. We still get glimpses of familiar faces, but they are kept as peripheral or supporting characters. Han Solo and Chewbacca are leading the team that Kes and Shara join after the battle of Endor, so we will definitely see them around, but we already know who they are as characters. I really enjoyed how Rucka set up everything, and I am really excited to learn more about Shara and Kes. One of the things I loved about reading the old expanded universe books, was meeting and learning about the other people in the universe. Rucka’s choice to keep the main movie characters to the side and focus on two new characters is brilliant, and will allow him more room to grow these characters without restriction.

Marco Checchetto and Andres Mossa do an incredibly amazing job on art in this first issue. Everything is beautiful and looks like Star Wars. There is a level of detail that elevates the art here above what we would have seen during the Dark Horse era of Star Wars comics. Checchetto draws familiar characters so we can recognize them, but in his own style. They are not exact photorealistic versions of the actors that played these characters on film. I really like this approach, as it allows the artist to still draw in their own style and not have to worry about making carbon copies of Harrison Ford or Billy Dee Williams on the page.

I’m really excited to see this series move forward. The first issue was fantastic, and introduces the reader to new characters as well as setting up the story to move forward alongside some of Star Wars’ classic heroes. We’ll get to see events unfold near the “frontlines” but through new perspectives. We’ll get to know some new characters along the way which will help to strengthen and grow the franchise. If history repeats itself with this new expanded universe, then in a few years we’ll have a plethora of fan adored characters from comics and novels. Shattered Empire is where this is all kicking off.

If you are at all interested in what happens after Return of the Jedi, and like character driven stories, then you need to pick up Shattered Empire. It is set far enough behind Episode 7 that it should not spoil anything before the film releases.