Another month, another crop of wonderful Star Wars comics.  This month, we also had the addition of a BRAND NEW NOVEL, Dark Disciple by Christie Golden.  If you loved the Clone Wars television show, you need to check this one out.  Based on 8 unfinished episodes, Dark Disciple wraps up Ventress’s storyline.  I can’t get over how much I enjoyed it.

Ok, time for some comic books. 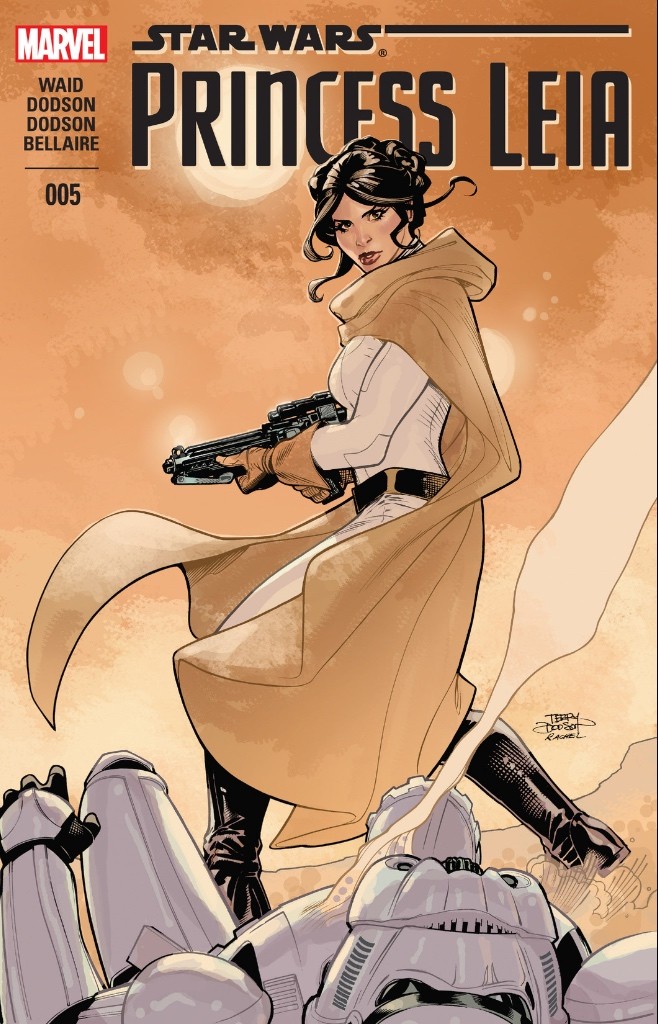 Break out the tissues – this is the last episode of Leia’s miniseries.  I have a feeling this won’t be the last series we see Leia featured prominently, but it’s a good start to her now-canon new history.  By giving up herself to the Empire to save an Alderaanian, Leia demonstrates just how much she loves her people.  She’s not a martyr, though; Leia’s got some tricks up her sleeve to stick it to the Empire.  Her secret weapon?  Evaan. 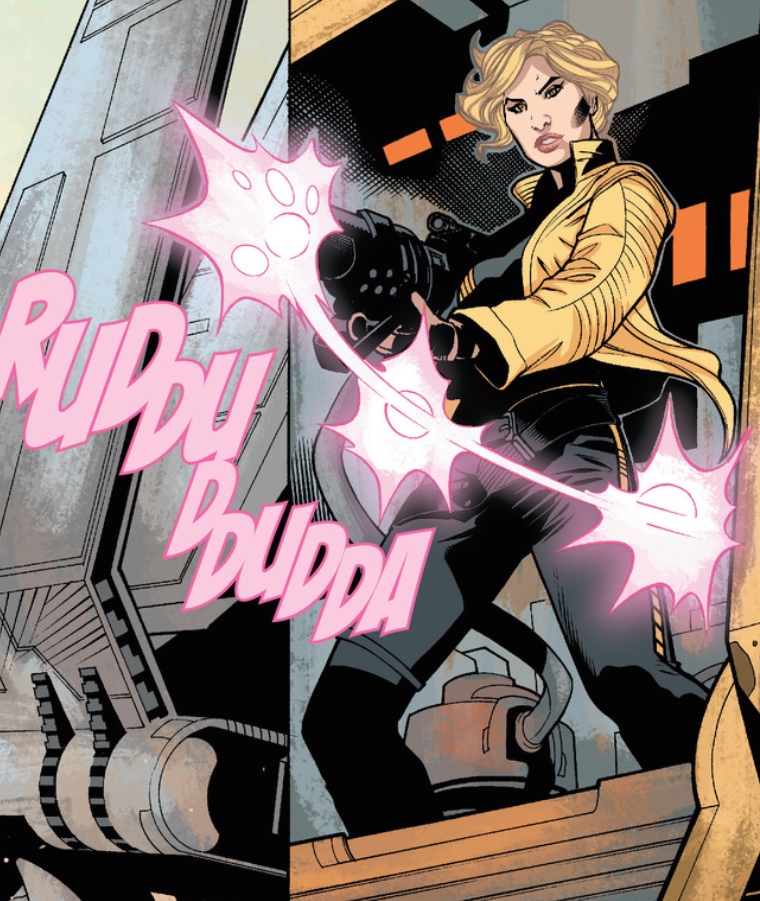 Though the two women had a rocky start, their adventures across the galaxy have brought them much closer.  They are not just princess and citizen – Leia and Evaan have grown to have genuine friendship between them.

Leia’s been rescued by Evaan, but she’s not ready to completely forgive Tula.  Tula’s actions while serving the Empire betrayed her culture and her princess, and these action are not easily forgotten.  However, Tula is an Alderaanian, and Leia will not isolate her because of that.  Tace, on the other hand, may have a different opinion.

Leia’s not out of hot water yet.  She and her crew must escape the Imperial ships, and it looks like there is no chance of survival.  Keeping in line with the theme of hope that runs through this miniseries, Leia makes a last-ditch appeal to an Alderaanian in the system listening.  In her speech, she states:

We are Alderaan.  We answer rage with wisdom.  We answer fear with imagination.  We answer war with hope.  We are, each of us, important.  Alderaan survives.

The Alderaanians of Espirion, the very people Jora rejected because of their mixed bloodline, answer Leia’s call to action.  Leia is validated in this moment; her adamant mission to save every Alderaanian she could proves to be the mark of a true leader.  Her hope is finally restored. 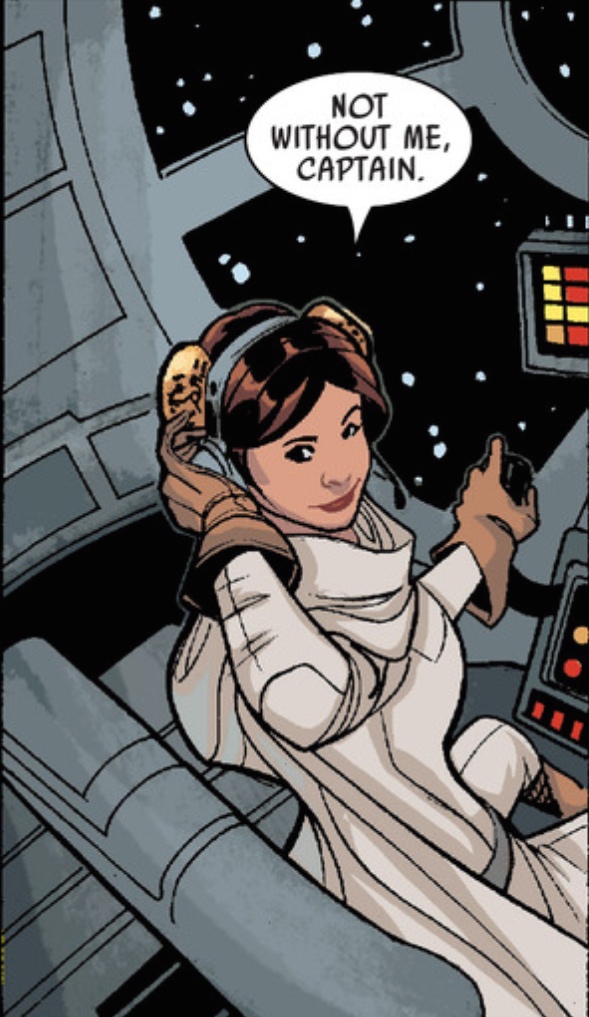 And, as a true leader, Leia recognizes that her place is still with the Rebellion.  She has always been a diplomat and a fighter, and Alderaan will thrive under a different type of leadership  She asks that Evaan take the position as leader of the Alderaanian colony, and Evaan answers the call.  Tutored under Breha herself, there is no better candidate. 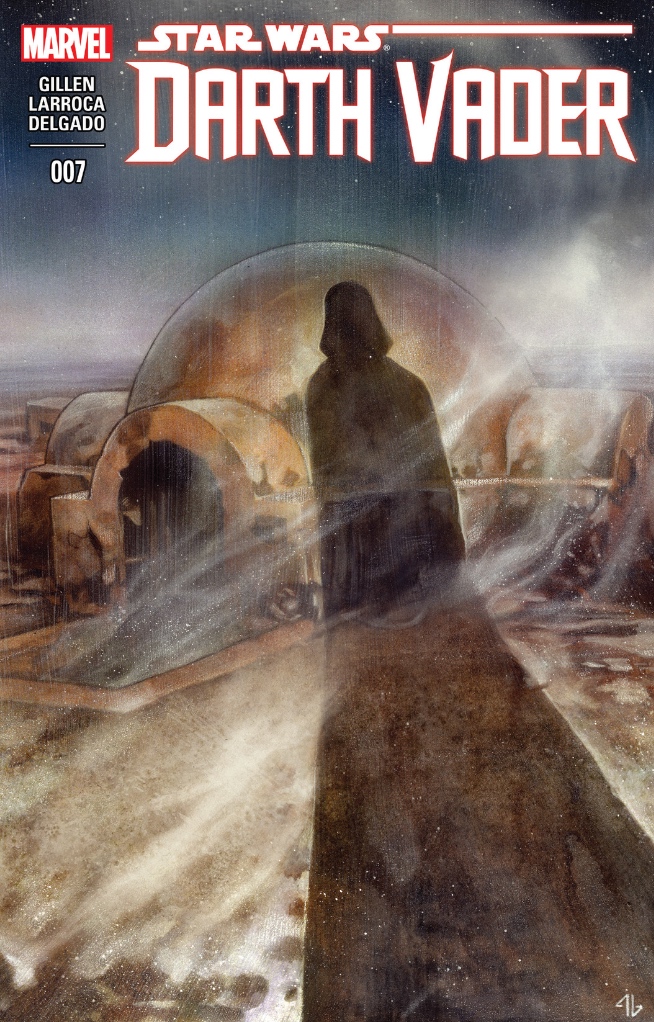 New arc!  New arc!  After last month’s doozy, it’s time we got a bit of a breather.

Well, that’s not the case for Vader.  Now that he’s got a name, he’s determined to find out all he can about the mysterious Skywalker boy.  First stop: Tatooine.  This isn’t the first time Vader’s returned to his homeworld, but now he arrives with a much heavier purpose.  Aphra, always on point, notes how the actions of the Empire spurred Skywalker on his journey overall.  Vader doesn’t question her observation; perhaps, through his connection to the Force, he knows exactly why her statement rings true.

Vader’s connection to the Force certainly allows him to make some assumptions about what went down in Kenobi’s old home.  It is unknown if he knew Luke fought Boba Fett while blinded, but he can tell the Force is strong with Luke.  He leaves disappointed in Kenobi’s choice to begin Luke’s training much later in life.

Vader returns to his job subduing the Outer Rim territories and putting the Hutts in their place.  Meanwhile, Aphra is making some big moves on her own. 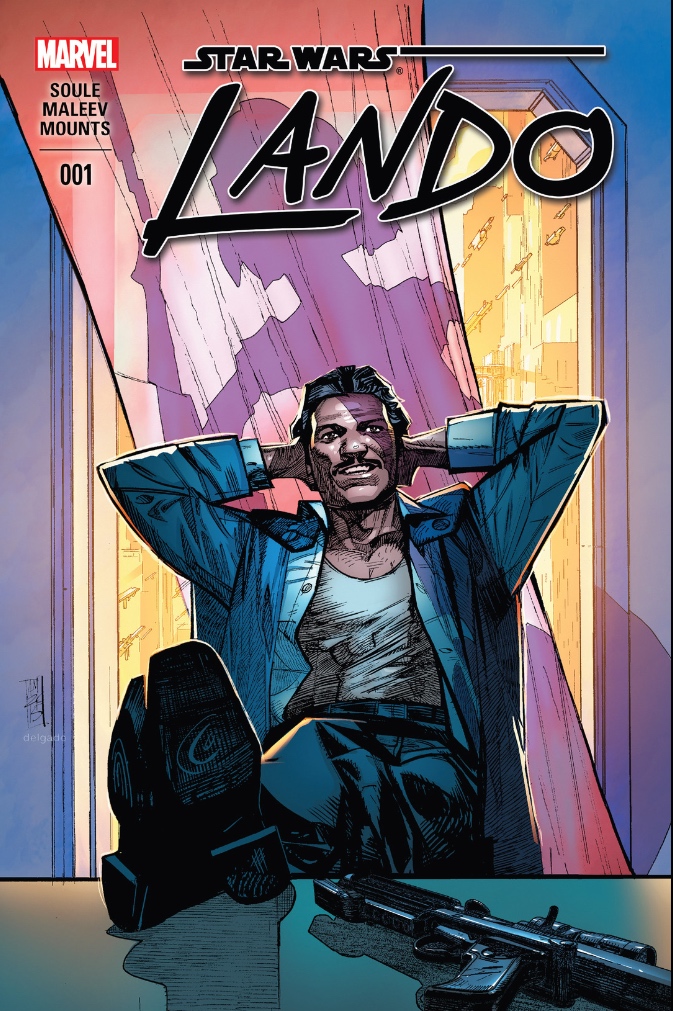 I totally predicted that Lando’s first issue would feature him in bed with a woman. 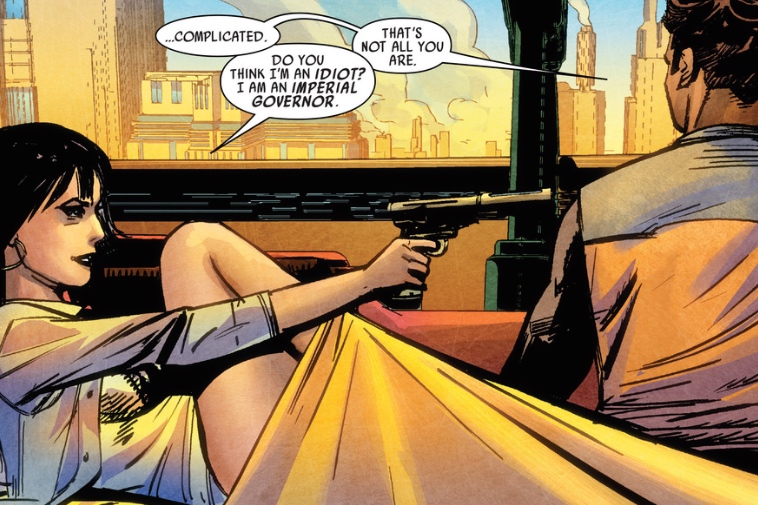 Which fits his style.  Remember how much of a smooth operator he was when he first met Leia in Empire Strikes Back?  Of course he seduces women to get what he wants.  But he’s not just seducing; Lando and his partner Lobot are plotting their way into a fortune, one desperately needed to relieve some extensive debts.

Lando definitely has a risk-taking personality.  He can’t help but gamble, thinking the big payoff is just one bet away.  He is, in many ways, an addict.  A very agreeable addict, but an addict nonetheless. 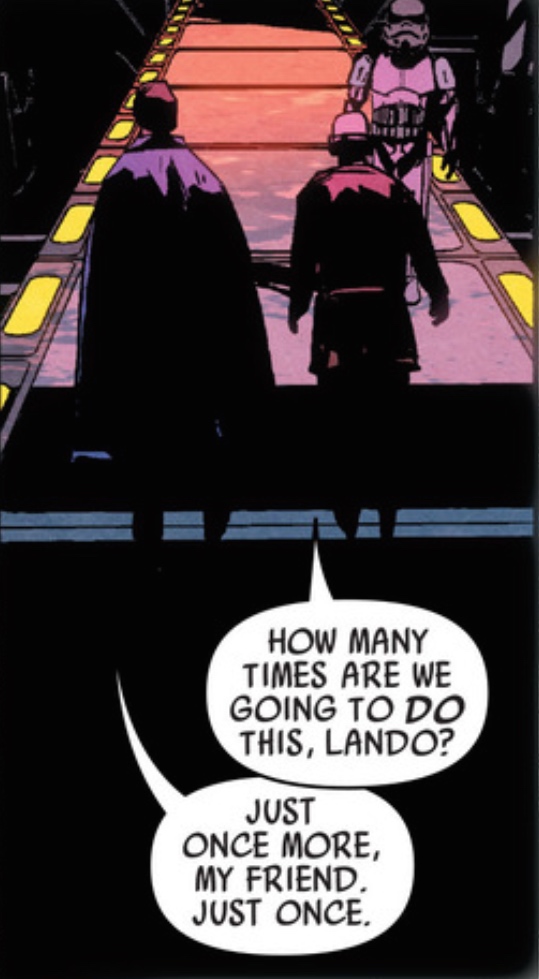 First issues in a series have a very distinct problem.  They must pull a reader in quickly and get them involved while also setting up the world in which the story takes place.  In Lando’s case, it is very dialogue heavy.  Granted, Lando and Lobot have much to discuss, but there is a lot of talking.  I was left a little disappointed by this issue, but obviously I’ll stick it out for the whole series. 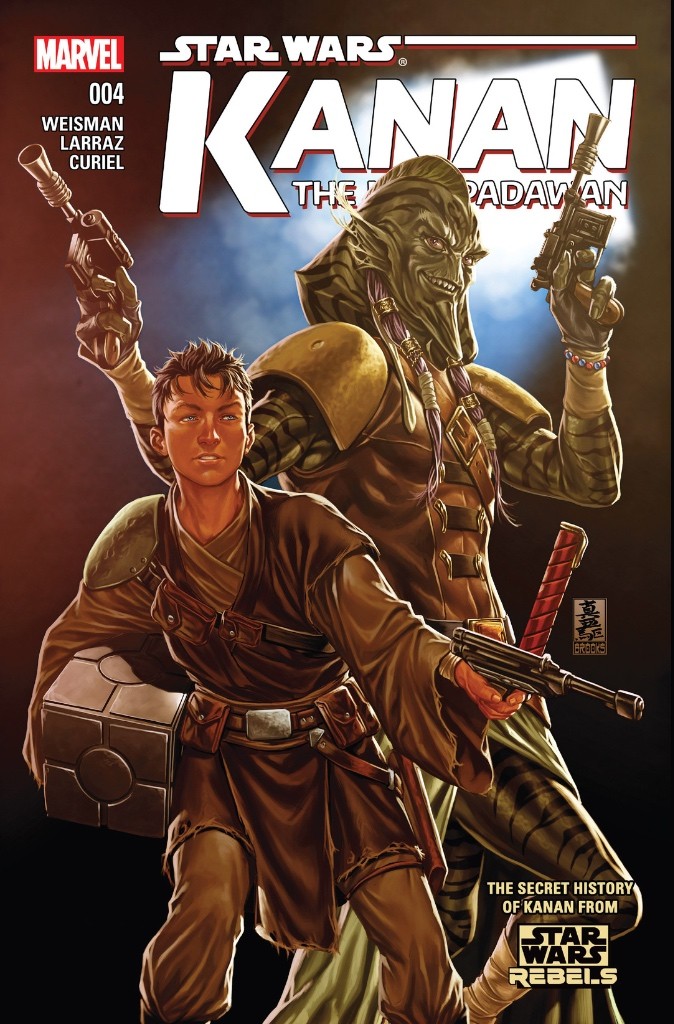 On to a series I ABSOLUTELY love – Kanan!

Caleb is betrayed by Kasmir, who outs him as a Jedi Padawan in order to get access to more money.  Kasmir surprises Caleb by rescuing him from his cell, claiming that his only motivation was to keep the reward money from Tapusk. 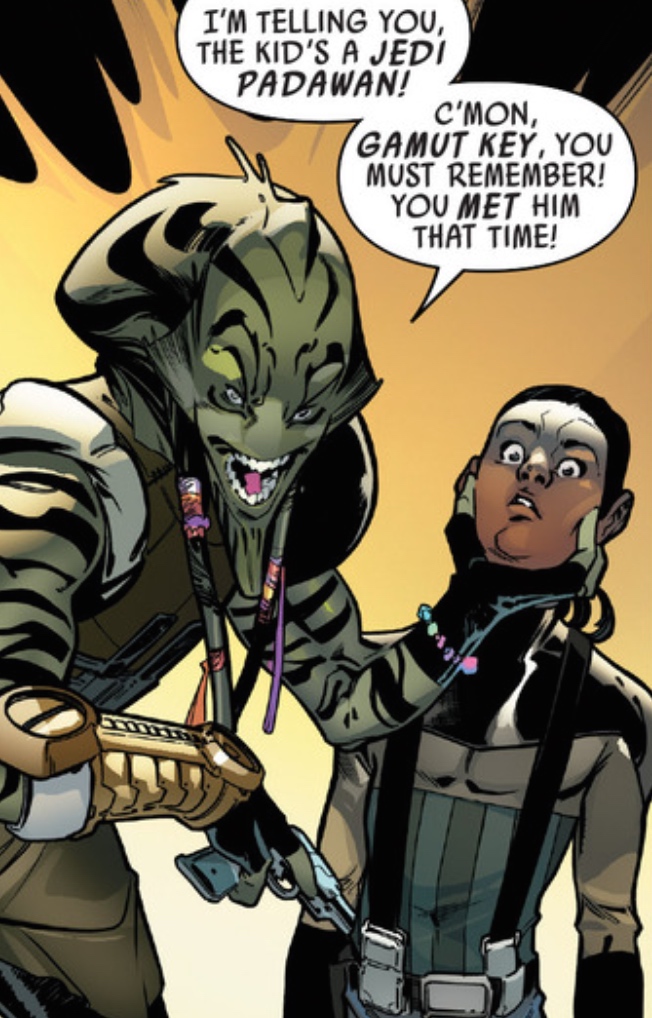 Sure, Kasmir.  We all know you are fond of Caleb Dume.

Caleb has a much different opinion of Kasmir.  His goal is survival, and Kasmir embodies that motivation.  Despite his new circumstances, Caleb does not think his former Master Depa Billaba would approve of his methods. 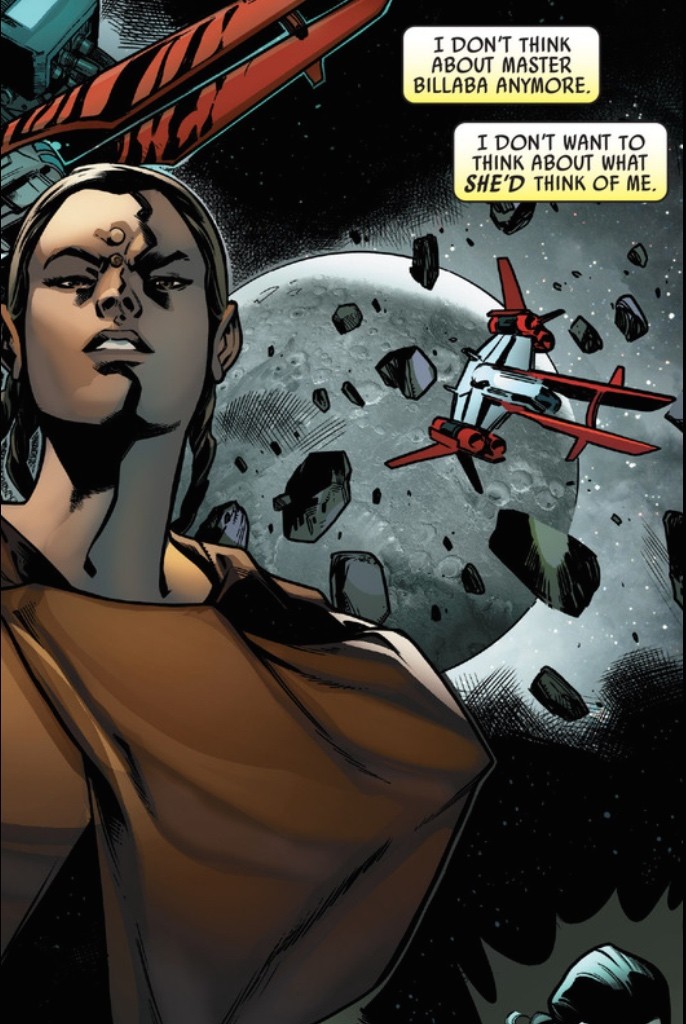 Even though he looks different, Caleb is still the same child we saw in the first issue.  The child who was thrilled to be on the front lines of the Clone Wars is the same child who is adapting to his new lifestyle as a thief and smuggler. 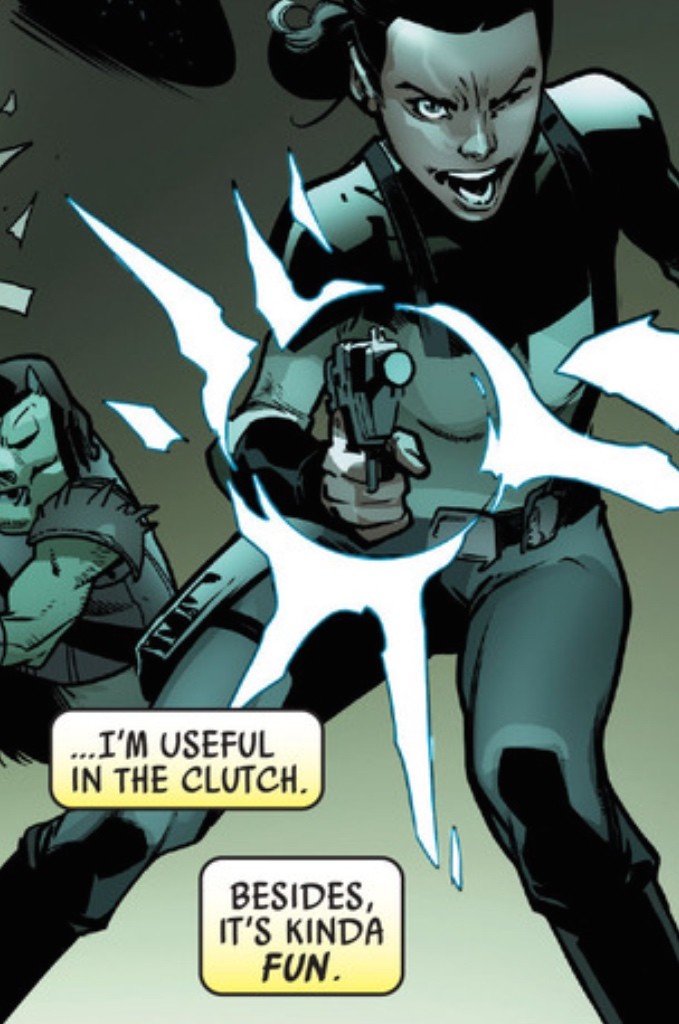 Two clones, Grey and Styles, are still on the hunt for Caleb Dume.  They are an ever-present danger, a reminder of Caleb’s past that is literally catching up to him.  The past isn’t all grim for Caleb; he realizes that the former enemies during the Clone Wars no longer had any motivation to harm him.  General Kleeve of the Separatists is able to offer Caleb a way out of his tie to Kasmir, which turns into a liability when the clones show up. 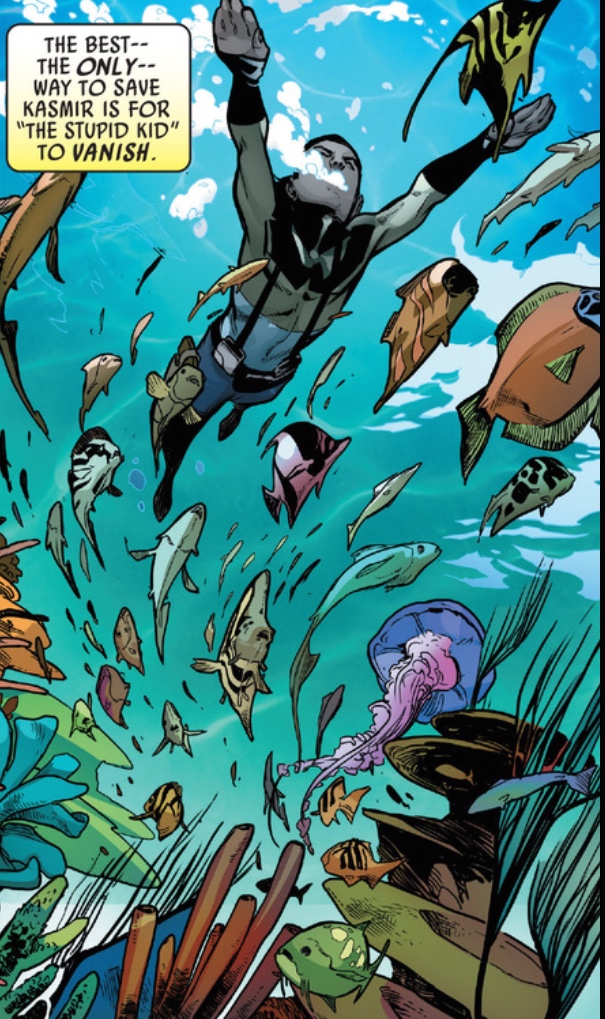 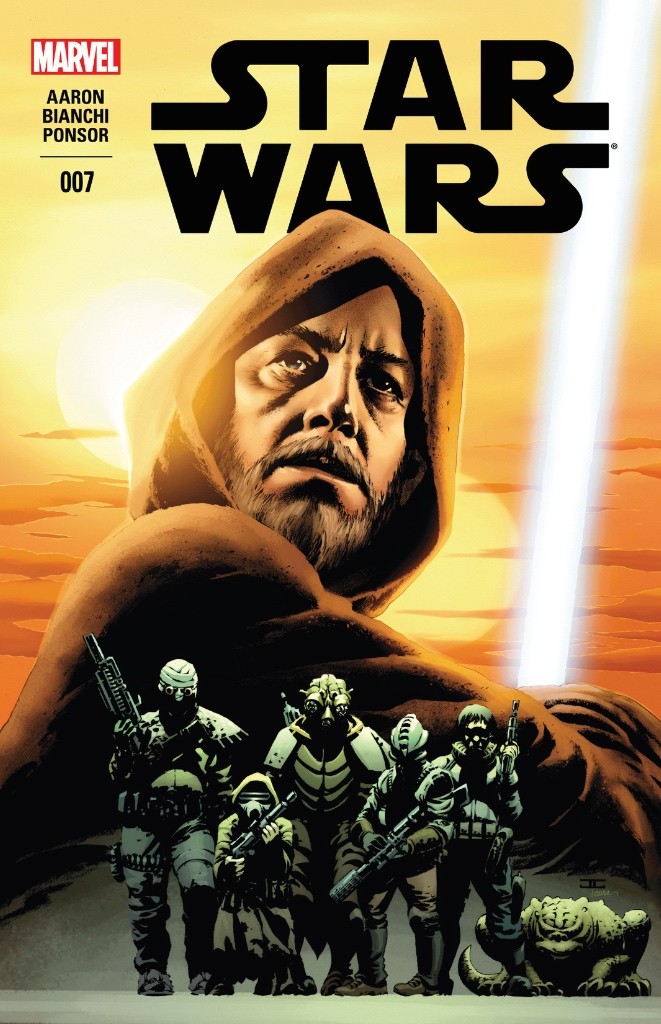 Finally, the story all of us Obi-Wan Kenobi fans have been waiting for!  What has he been doing all those years in the desert?  Luke’s discovery of Kenobi’s home and journal gives us some insight through Luke’s perception.

Jedi are being systematically hunted across the universe, meaning Kenobi has to lie low for the rest of his life.  This can be hard, especially knowing that the Kenobi we’ve seen in the prequels and in Clone Wars is a man who does not stand for injustice.  Tatooine, as part of the Outer Rim, is CRAWLING with injustice.  Gangs rule over cities, and the poor are oppressed at every turn. 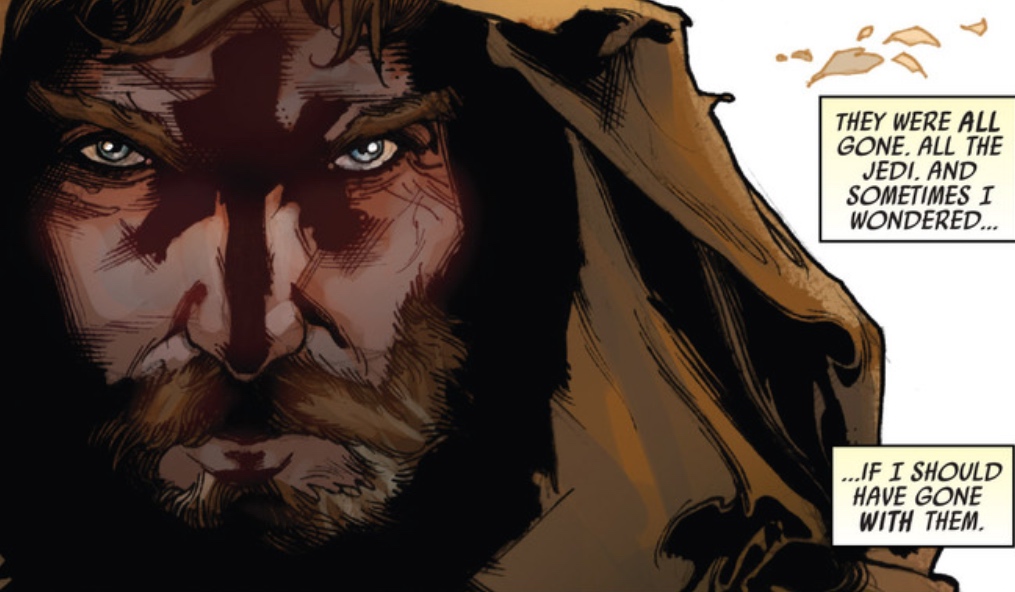 Kenobi has gone from being a Jedi Master who was prominent in the affairs of the galaxy to a relic in the desert.  His only mission is to oversee the life of young Luke Skywalker.  It’s interesting that this issue and Darth Vader #7 both reference this time in Luke’s life.  Vader laments that Kenobi never took the time to train Luke, while Kenobi reflects that Own never allowed him to teach the boy.  It’s possibly for the best; there is some doubt growing in Kenobi about his capabilities as a Jedi Master.

Yoda sent Kenobi to Tatooine with two purposes in mind: one, to watch over Luke, and two, to connect with Qui-Gon Jinn, who has mastered death.  Kenobi encounters frustration on the latter task as much as he has with the first task.  Lost and alone, Kenobi feels unprepared for the isolation.

This issue isn’t just about Kenobi.  Young Luke is featured, and we see just why he felt so pulled away from Tatooine.  Luke sees the evil around him and cannot stand to let it go any further.  With no weapons, Luke stands up to the local gangs pressing on moisture farmers.  Discretely, Kenobi handles the dangerous criminals and brings Luke home.  In that brave moment, Kenobi learns something valuable from Luke’s actions. 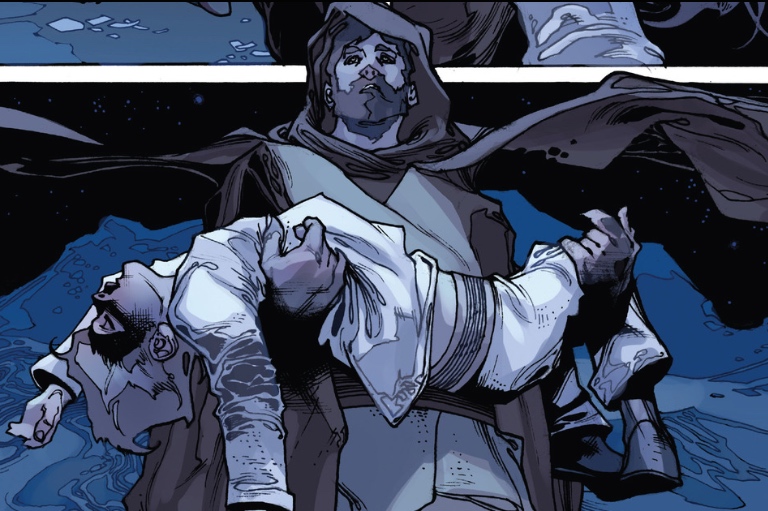 That’s a wrap for July!  May the Force be with you!