I hope that you, the reader, will indulge me if this review is a little more personal than usual. I am her 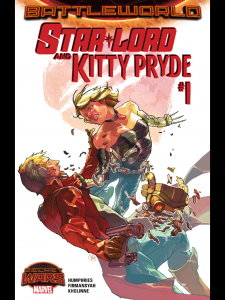 e to publicly confess that I have a major crush on Kitty Pryde. I have since Jason Aaron’s Wolverine and the X-Men, and the more I explore her character, the further I fall. I think it was Claremont and Byrne’s intention to create a character in the X-Men mythos that the reader can both relate to and fall in love with. Throughout the years, when my fictional crush has found love, it had always been problematic. It’s not that the three Peters (Rasputin, Wisdom and Quill) haven’t been good enough for her, it’s that no one has been. But I think that this is the issue where that might all change. Her fiancé, the legendary Star-Lord, might have finally scored my blessing for Kitty’s hand.

While Star-Lord and Kitty Pryde #1 might be a Secret Wars tie-in, the Peter Quill in this issue is not an analog, but the real deal – separated from Reed Richards and the other survivors of the 616. Quill is stranded in an alternative Manhattan, full of variants of Marvel characters. He does what anyone in that situation would do: take the alias of Steve Rogers and uses his knowledge of the former world to introduce something new to the parallel. This means starting a band with the alternative Abigail Brand, Werewolf by Night, Strong Guy, and singing Disney songs – passing them off as his own creation. Naturally, fame finds him pretty quickly.

While everything is going great for Peter, he’s still in mourning over the loss of everyone he knew in the 616, especially Kitty. In this universe, Kitty works for Valeria Von Doom’s school, not only as a recruiter, but also as an undercover researcher.  She has an ever-growing suspicion that maybe God Doom isn’t as omnipotent as he might claim to be. When a meeting with Gambit brings her to the nightclub that Peter performs at, he is naturally drawn to her. For him, even the multiverse cannot slow down his love for her, even if she is slightly different from the woman he lost.

Appropriately, the comic is written by Sam Humphries, who with Brian Bendis served as matchmaker for the couple in the past year. He brings the same humor/action mix that he previously brought to Star-Lord’s title series. The art is handled by Alti Firmansyah who presents a large-eyed expressive animated look that is reminiscent of Disney films, which becomes a motif in this series. The only complaint that I have is that Kitty doesn’t have much to do, but since there are a few more issues of this miniseries left: I feel like her story will be explored more soon.

VERDICT: Buy! First and foremost, this comic is a unique tie-in to Secret Wars, following the familiar version of a character from the formal universe. Because of this it gives us the next chapter in one of the more interesting relationships in superhero comics. I can’t believe I’m about to type this, but #starkat forever!