From the time Anna was born, I’ve wanted to share my pop culture loves with her, but many of the current comics I read or tv shows I watch just aren’t appropriate for her. Her favorites are My Little Pony, Scooby-Doo Team Up, Ms. Marvel, Bandette, and Princeless [see Anna’s review of Princeless here and her review of Pet Avengers here].

She loved the show. As an adult, at first I didn’t enjoy it as much as she did because it is so…1981. But it grew on me. It’s worth watching as a kid’s introduction to the characters that is not scary or violent, and it has some genuinely funny moments. Here, verbatim, is a conversation we had about the series.

Carolyn: Who are the main characters in Spider-Man and His Amazing Friends?

Carolyn: What do you like most about this cartoon?

Anna: I like Firestar. At the time in the late 1900s many people thought girls couldn’t be superheroes or have the same powers as men! Ms. Lion’s really funny. Iceman and Spider-Man are good too. Bobby makes a lot of jokes. Something that I don’t like about it is Firestar getting kidnapped. Like, a few times and the guys have to rescue her. There was only maybe one time when she rescued herself, when she and Iceman were in opposite rooms. Her room was cold and his was hot; she made a hole in the room so they could switch rooms. The guys don’t get captured as often as she does. But she does rescue them too. 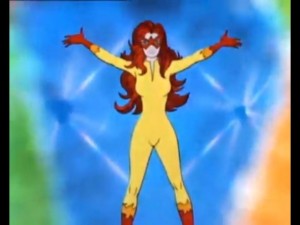 Carolyn: What are some of the best episodes?

Anna: There was this villain who was trying to escape from the land of shades. It had the Black Knight and Mordred [“Knights and Demons”].

The one about “eight little superheroes” [“Seven Little Superheroes.” Anna’s correct here, though; there is an eighth superhero].

The one with Thor and Loki, where Loki impersonates Thor [“The Vengeance of Loki”].

The one with Magneto. [“The Prison Plot”].

The one with Red Skull—he’s crazy! I mean, really, you can’t be the second Adolf Hitler! [“The Quest of the Red Skull”].

The ones with the X-Men [“The X-Men Adventure” and “A Fire-Star is Born”]. 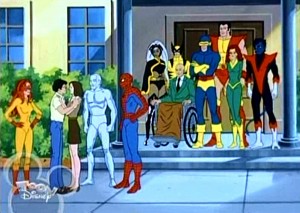 Carolyn: What were your favorite parts of these episodes?

Anna: I really like that in the one about Red Skull, he makes a lot of elaborate traps and illusions. I mean, really, who hangs somebody upside-down over a snake? To show the guys where she is, Firestar writes on a mountain with her fire powers, “Here guys.” And she also says when Spider-Man is swinging from his webbing on the trees to get to Red Skull, she says that if he says “Me Spider-Man, You Hot Stuff” again, she’ll break his webbing. Seconds later, he says “Me Spider-Man, You…” but he never finishes because she breaks his webbing and he falls into a bush! 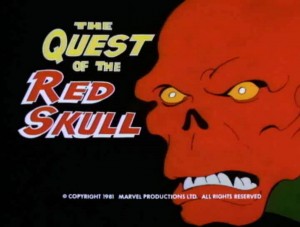 In the one about Loki and Thor, Loki does a very bad job impersonating Thor. Thor would never trap anybody in diamonds, and would never set out to control the world.