Negative space is what surrounds us.  It is the air blowing in our face, the gap between a hug with a close friend, the space between a man and a bullet before it penetrates his skull.  Most importantly, negative 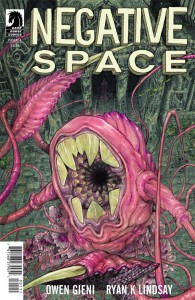 space defines the boundaries that make us us – bringing together a full picture of the world in which we reside.

Negative Space #1 brings us into the deep of that world.

Looking at the cover art of Negative Space #1, Owen Gieni’s beautifully defined artwork shows a monstrous flora resembling a venus fly trap gone mad, against a ghoulish green-forested backdrop – stimulating to any sci-fi horror fan. However, the horror behind the cover delves much deeper than that – into the fear that resides within ourselves. Gieni brings human emotion, corruption, and that sprinkling of sci-fi to life with breathtaking definition in his artwork.  The shadowed, sunless coloring of Negative Space #1’s world immediately sets the tone for the story.

Ryan K. Lindsay begins this story by bringing us into the mind of our aptly-named protagonist, Guy, whose tribulations are written with such familiar emotion that it’s as if you’ve dug into someone’s memoirs.  Guy is introduced as an empathetic, out of work novelist who is struggling with writer’s block on his final chapter – his suicide note.

Lindsay’s writing is breathtakingly harmonious with Gieni’s visual portrayal of Guy, an out of shape, lacking in sleep, pondering man who very badly needs a hug.  As he muddles throughout his day pulling at your heartstrings, we find out there is a more sinister involvement in his life.  The antagonist at hand is in the form of a corporation, ironically labeled Kindred Tower. The aforementioned’s unofficial business appears to be sucking emotion and empathy out of the world and feeding it to the powers that be, only known as a yet-to-be-defined Evorah.

Kindred Tower employs those who are already devoid of empathy, only out to succeed in their insidious assignments.  They are scoundrels, cogs in a wheel of societal destruction.  Lindsay and Gieni flip the switch on the sweet, forlorn protagonist and are able to hit the Kindred Tower employee’s brash, icy hearts with a bullseye.  These characters send a reminiscence of the way large corporations are viewed in reality – only looking out for the big sale.

As you walk along with Guy through his day you find that he has at least one ally, who seems to be an encouraging light in his otherwise dark microcosm.  Between the light and the dark, this issue answered the question of why this series was chosen to be titled Negative Space.  What is the negative space around Guy, and what about that space is going to define him?

VERDICT: PICK THIS UP. If you have struggled with yourself at dark times throughout your life, this won’t make you feel alone. As the main character is very relatable, you can determine what the antagonists represent.  What the future holds is yet to be told, but this issue leaves you wanting for more.