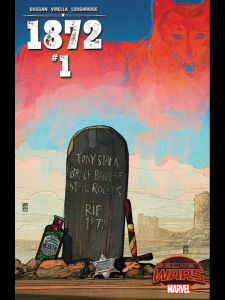 1872 is exactly what these Secret Wars tie-ins should be about: using the Marvel characters in fun, unconventional ways. This series takes part of its inspiration form the Silver Age Marvel comics that predated Fantastic Four #1, back when westerns were a big seller for the publisher. The other part comes from a grittier view of the Wild West, in the vein of Deadwood and Unforgiven. I think that this, combined with the Marvel heroes, is a very fun experiment on behalf of Gerry Duggan and Nik Virella.

The first thing that you should know about this comics is that it isn’t subtle with its characters. Wilson Fisk is the crooked mayor, Steve Rogers the incorruptible sheriff and Tony Stark is a joking, drunk inventor. I don’t think that a comic like this needs to be subtle. This issue strips away powers from the characters, in exchange for an exercise in characterization. Duggan impressed me with his ability to take the voice of these characters from their contemporary setting to one that’s foreign to readers.

Another thing I find these tie-ins to take advantage of is a chance to bring an artist that might have flown under the radar to our attention. Nik Virella takes no shortcuts in this book. She brings to life the Western gritty period in a very detailed and expressive way. I really hate that this comic is not likely to survive beyond this mini-series, because the world that Virella presents is one that I would love to further explore. I even found it hard to stop staring at the town map of Timely (told you it wasn’t subtle) at the beginning of the issue. Like the rest of this book, it’s full of references that any Marvel fan would get lost in.

If there is one downside, it is the re-imagining of Red Wolf, a Native American character from the seventies. His portrayal struck me as one that is too stereotyped for comics today. It could be justified that he is presented based off of the prejudices of its setting or of the comics it takes inspiration from, but I feel if that’s the case then it is the creator’s responsibility to have fleshed out the character more. I hope that over the next few issues this improves, especially since Marvel has shown in promo’s that he will have a role after Secret Wars.

Verdict: BUY! A comic doesn’t have to be monumental to be important. I think this issue is another feather in Gerry Duggan’s hat and a great introduction to a wider audience for Nik Virella. While I do hope that Red Wolf becomes more dimensional character, it hardly takes away from a comic that might get unfairly glanced over.