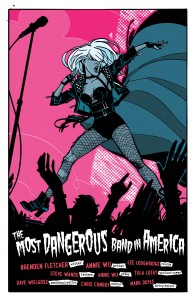 Reinventing beloved characters is a difficult task to pull off but with the formerly dubbed New 52 universe, the landscape is all the more flexible to work with. The problem with the reboot back in 2011 was that it didn’t reinvent the characters in a variety of ways but the precursors to the DC YOU movement have proved that reinventing can go beyond shiny, new redesigns and modernized backstories. By now, Gotham Academy and Batgirl co-writer Brenden Fletcher should be very familiar with this “new” direction that DC’s taking, being that he is one of the pioneers, and it definitely shows here in this issue. Black Canary #1 goes above and beyond to prove that reinvention can be an amazing experience.

Following the events of Brenden Fletcher, Cameron Stewart, and Babs Tarr’s first Batgirl arc, Dinah “DD” Lance is now the mysterious new frontman for the Black Canary band and they’re on the road across the country so Dinah can pay her debts and get back on her feet. For those of you die-hard Black Canary fans, this new direction could be a hit or miss for you. Truthfully, I was a little scared about the idea of Black Canary being the lead singer of a band on tour but given the creative team, I had complete trust that it would be a wild ride and an amazing read. 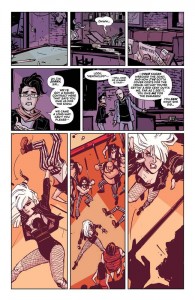 This first issue, titled “The Most Dangerous Band in America,“ is framed by a Burnside concert review (Burnside Tofu: the sine for people with the right kind of taste) and very practically sets up Dinah’s world as the public perceives it. As the review states, “DD” is a mysterious figure who starts more fights than encores and it’s creating a lot of tension in the band. The band members don’t know much more about Dinah’s past than the public does and Dinah herself is struggling about whether or not going on tour was the right idea. Much like Fletcher and Stewart did with Batgirl, this issue addresses the concerns that some fans may have with Dinah’s seemingly out-of-character choice. At the heart of it all, Dinah is still a hero and regardless of the changes to her character, this issue highlights that above all.

Annie Wu’s art is absolutely spectacular and there is nobody better suited to colour Black Canary than Lee Loughridge. Wu’s lines are rough and evocative, making Dinah’s presence on stage dramatic and the fight scenes more pronounced. My one critique about the art would the one panel at the end of the half-page ad spread, which has two characters heads talking to each other. It took me out of the story but that could also be because of the Nick Lachey/Twix ad right underneath.

Verdict: BUY. This is a spectacular and unique reintroduction to Black Canary. I’m a big fan of the direction this series is taking, despite some initial concerns. Considering the context, it makes sense for Dinah to be in this position and given that the Black Canary many longtime fans knew and loved has gone through many changes in the New 52, it’s good to take in this series with an open mind. Although Dinah is now the lead singer of a band and she’s on tour with them, she’s still a hero and this first chapter of her journey does well to remind us of that. Reinvention can be a scary risk but Black Canary proves that risks can be rewarding and reinvigorating as well.