From the time Anna was born, I’ve wanted to share my pop culture loves with her, but many of the current comics I read just aren’t appropriate for her. Her favorites are My Little Pony, Scooby-Doo Team Up, Ms. Marvel, Bandette, and Princeless [see Anna’s review of Princeless here].

Here, verbatim, is a conversation we had about the series. We both highly recommend it.

Carolyn: Who are the Pet Avengers? 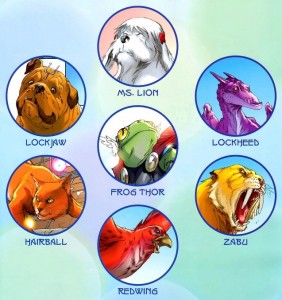 Carolyn: Do you know who their owners are?

Anna: Lockheed’s owner is Kitty Pryde [of the X-Men], Lockjaw’s owner is Medusa [of the Inhumans] but I first saw him with the new Ms. Marvel. Redwing’s is Falcon. Redwing always talks about Falcon. Throg uses fancy language like Thor…

[She takes out my ipad, goes to Marvel Unlimited, and reads:] “Lockheed is an alien dragon; Redwing, the noble bird of the hero Falcon; Zabu is the loyal sabertooth partner to Ka-zar; Hairball, a cat gifted with kinetic powers; Ms. Lion, a well…um…dog. And I am Frog Thor, but thou may call me Throg.”

Carolyn: What do you like most about Pet Avengers?

Anna: Hairball and Ms. Lion are funny together. Cats and dogs never get along unless they grew up together. Ms. Lion’s kind of annoying, but funny. Like when they’re in the water, Hairball says, “Hate the water, hate the dog, hate, hate, hate. Get me out of here, don’t like water, must get away from water and dog. Dumb dog.” But then Ms. Lion saves her. And Hairball saves Ms. Lion too. On one cover, all the pets look brave, and Ms. Lion is drooling. And she, meaning Ms. Lion, is on the cover of many of the books. All of the pets look ready to defend themselves and they look heroic. While they’re saving the Earth, Ms. Lion pees!

Carolyn: Ms. Lion’s not a she… 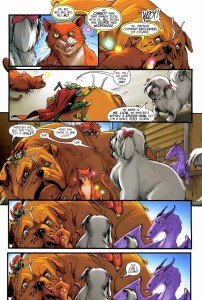 Carolyn: What is their mission [in Lockjaw and the Pet Avengers]?

Anna: To find gems and destroy them.

Carolyn: Yes, they need to keep the Infinity Gems from Thanos. [She looks blank]. The big purple guy?

Anna: Right. I like this one the best because you meet everybody. They’re all different and they’re a good team. 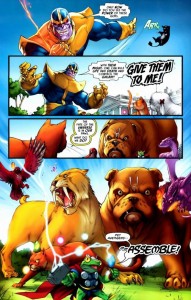 Carolyn: Avengers vs. Pet Avengers is a little different, though.

Anna: They are on opposite sides of a battle. The Pets work with the dragons and Fin Fang Foom, not the Avengers. The Pet Avengers are right to work with the dragons. And also, Captain America, Iron Man, and Thor are frogified. Iron Man keeps saying, “I want my armor!” 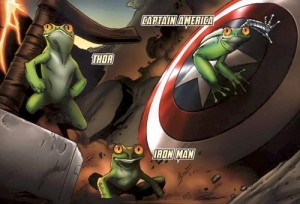 Carolyn: What about Lockjaw and the Pet Avengers Unleashed?

Anna: They’re looking for Throg, and they find him in another land, a dream world. And they meet a Yeti, who Ms. Lion names Hairball 2 and that makes Hairball mad, and a unicorn named Damiella. They save the world. 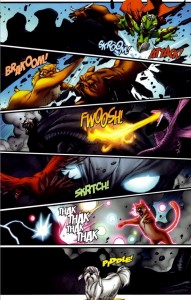 Carolyn: If you were to describe Pet Avengers to your friends, what would you say?

Anna: They’re animals, and they’re funny and heroic. Both boys and girls would like it. Pet Avengers–Assemble!

Carolyn Cocca is Associate Professor in the Department of Politics, Economics, and Law at the State University of New York, College at Old Westbury. She is the author of “Re-booting Barbara Gordon: Batgirl, Oracle, and Feminist Disability Theories” in ImageText, “The Brokeback Project: A Quantitative and Qualitative Analysis of Portrayals of Women in Mainstream Superhero Comics, 1993-2013” in the Journal of Graphic Novels and Comics, and “Negotiating the Third Wave of Feminism in Wonder Woman” in PS: Political Science and Politics.