While Secret Wars rages on in the Marvel Universe, it is proving that there is something for everyone in Battleworld, including Marvel’s creators. The most enjoyable part of this event has been the mini-series focusing on specific locations in the larger Battleworld, with each region representing a different time or place or reality from Marvel’s continuity. For creators, it has given them opportunities to play in sandboxes that have long been blocked off until now. Weirdworld represents a part of Marvel history which sadly has been left dormant for far too long. In the seventies and eighties, outside of Marvel’s superhero books, there were published various fantasy, sci-fi and horror books that at times rivaled Marvel’s heroes when it came to sales. Weirdworld is Jason Aaron and Mike Del Mundo’s chance to pay homage to comics like Epic Illustrated, Conan the Barbarian, John Carter, Warlord of Mars and Heavy Metal (which of course wasn’t published by Marvel, but to not mention it feels wrong).

Reasonably, these previously mentioned series might not appeal to someone more interested in the more traditional superhero book, but it does have plenty tips of the hat to some of Marvel’s more fringe characters, like protagonist Arkon of Polemachus, who has had numerous run-ins with the Avengers in the past. Arkon’s daunting journey here is to find his way back home by leaving the floating island of Weirdworld-where monsters, dragons and ogres dwell. Along the way, the reader is given numerous subtle nods to more characters the occupied the Marvel universe in the seventies and eighties like Devil Dinosaur, Warewolf by Night, Man-Thing and numerous others that I’m sure I’ve missed. There is even a nice tease at the end of an unexpected Marvel villain that fits into this world nicely. 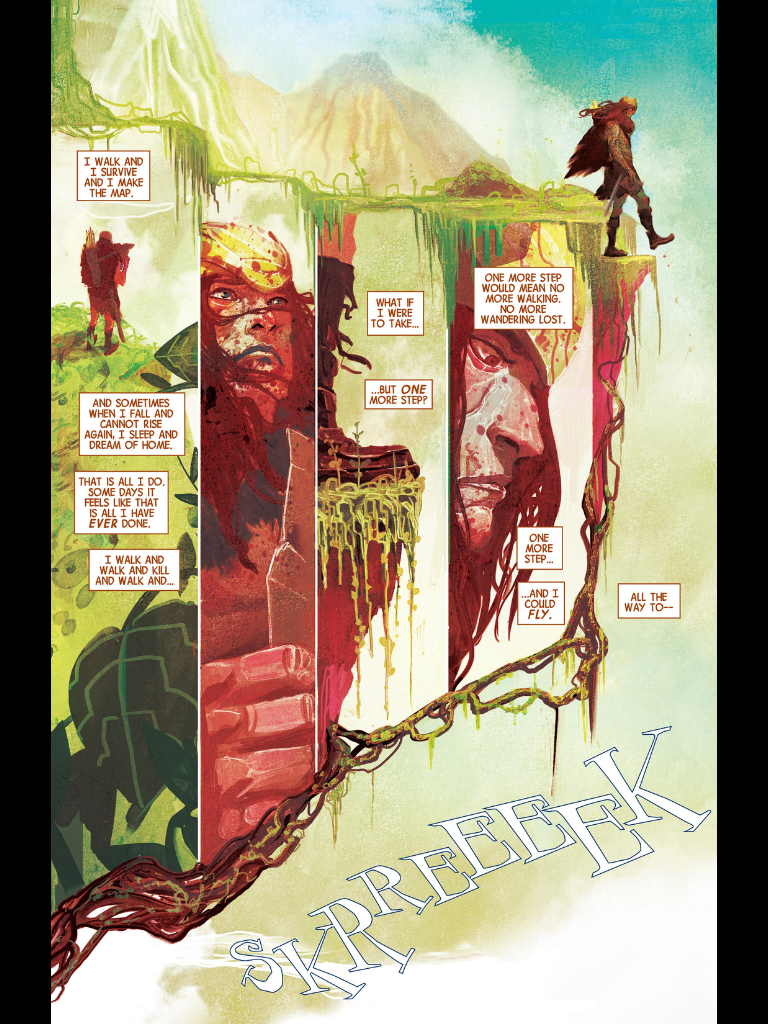 It should be stated that the creators never take the easy way out and litter this story with irony, as is often done when a comic revisits a previous comic style. This is the definition of homage, as Aaron channels Roy Thomas, Marv Wolfman, Jim Starlin and Archie Goodwin and Del Mundo illustrates in the key of Barry Windsor-Smith. To be fair the work is closer to imitation, but there are excellent moments of originality when it comes to how Del Mundo plays with panel placement and page layout, and Aaron delivers some dialogue (both spoken and eternal) that is as witty as it is gloriously disturbing. Imitation in a book like this isn’t a bad thing, and it’s welcomed many times over than parody would have been.

If you happened to have caught Garth Ennis and Russell Braun’s Where Monsters Dwell tie-in a few weeks ago (and sweet mercy, why wouldn’t you have) then you will love Weirdworld; as well constructed as a comic that you can hope to find out of the major publishers this summer. It’s hard to tell anyone to rush out and buy it though. It’s an odd duck that can be an excellent impulse purchase, or something that might be great when it’s collected. It certainly isn’t a necessary read because I doubt that it will have much impact on Secret Wars, but really, it doesn’t need to. If reading this has made you curious, then you won’t be disappointed, because clearly you are titillated by things that are bad ass (there isn’t many other ways to describe it.)