Maria W. Norris is a final year PhD candidate at the London School of Economics and Political Science. Her research is on British Counter-terrorism strategy and legislation, with a focus on nationalism, security and human rights. You can find her on Twitter rambling about comics, human rights and magical girls as @MariaWNorris 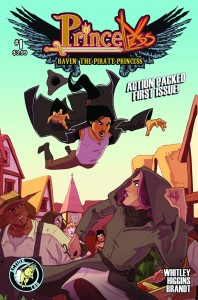 So what is it that you love about comics?

Ted: So much! Comics as a medium is ideal for me. I’ve got a mild case of Aspergers and specific language impairment. The optimal way for me to understand things is a mixture of verbal and visual. So comics are the ideal information delivery system for me. They make much more sense than virtually anything else. I love the story-telling involved across all the genres. I love seeing how inventive people are with page design. The page as a meta-panel. And for example, David Aja is someone that really understands that.

Rosy: I accidently got into comics. I wanted to be an animator, but I didn’t have the patience for it. I landed by luck in the course for comics. I met Ted and he’s dragged me along with him. I’m very lucky to have found him.

What was the first comic you read?

Ted: As a child, I read Beano, Tin Tin, Asterix. But Wolverine #165 was the first comic I bought for myself.

Rosy: For me, it was Simpsons comics, I think.

What are your favourite comics right now?

Rosy: I recently got the first 3 trades of Fraction’s Hawkeye. So pretty. I keep on stroking the colours and whispering to myself ‘I wish I could do that’.

Ted: The current Thor is amazing. It’s great. I’m enjoying more than I have any Thor book since he came back from the dead. Mark Waid’s Daredevil has been perfect since it started. And Ms. Marvel is absolutely fantastic. It’s such a joy.

How did you get involved with Princeless?

Ted: Luck, pretty much! We were between jobs and houses and trying to work out where we wanted to go. We knew we wanted to get into comics eventually, but did not know really how to do it. We needed a job. And then Jeremy announced on the Princeless Tumblr that volume 3 had to be substantially delayed due to the artist having left the project. And we were like: ‘Oh, that’s tragic. Maybe we could do that’. 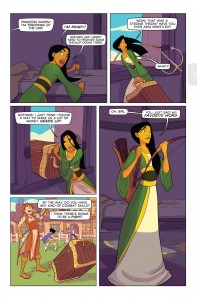 Rosy: We pounced on the opportunity.

Ted: We sent some samples of stuff we had done previously and Jeremy [Whitley, Princeless creator] got back to us and let us know that it was basically between us and one other person. So in trying to get an edge, we asked if we could have some character descriptions.

Rosy: We asked for sample pages.

Ted: Yes, so we could show him what we could do. So he sent over the first script, we sent them the character designs, and then we got the job!

Rosy: It’s not like we had anything to lose. We took a chance.

Ted: Showing that kind of initiative and ambition is never a bad thing. It shows the other partners in the project that you’re willing to put the effort in.

Rosy: Yes. So quite a shock to now be working on an ongoing. We’re starting on the deep end.

Ted: Yes. We met at university doing an illustration degree. It was Rosy’s first degree, my second one. My first degree was in Psychology. I enjoyed it but then I realised that if I wanted to do a good job in the field, I needed a PhD. And I realised I didn’t like it that much.

Jeremy has been very clear on the importance of representing different body types and ethnicities in the comics.

Ted: Jeremy literally said: I need enough girls to fill a boat crew and I want a variety of ethnicities and body shapes. Obviously we needed more details, such as the size of the boat.

I’ve made no secret of my love for Raven, but I love ever single one of Raven’s crew. They are so awesome and expressive!

Rosy: Thank you! There’s a lot of pulling faces at the iPhone trying to get the right expression. Plus photo referencing to get the body language right.

Ted: If a comics artist is doing their job right, ideally you should be able to read the story with all the balloons taken out. You would lose some nuance, but you should be able to tell what the plot is, what the characters are and what their relationships to each other are. It makes it much easier and engaging to the reader.

I also like how the different the art is from the other Princeless books.

Ted: It was a big conscious decision to change it up. We are the third art team on Princeless in as many volumes. But there is still a recognisable aesthetic in the book. They all feel part of the same series. That is quite a challenge.

Rosy: Raven has slightly older target audience. So we felt we could go less cartoonish.

That was something I wanted to touch on, the tone of Raven: The Pirate Princess is different from the other Princeless books.

Ted: Raven has a more mature theme. Adrienne has a universal age experience theme. She’s a young girl who doesn’t know where her place in the world is, but knows where it isn’t. Raven is older, she knows where she’s going. She’s going to get revenge on her two brothers that robbed her of her birth right.

Which one is your favourite to draw?

Rosy: That’s so tricky. They are all so much fun.

Ted: We don’t have the whole cast yet, so we can’t really say. Most of the girls have only been on page for a couple of panels. But I think Desideria is my favourite.

Ted: She’s fun to draw. We needed a giant goth who glared at everyone.

Finally, what is your elevator pitch for Raven: The Pirate Princess? Why should people pick up this comic?

Ted: Raven is an independent and angry young woman who has decided to reclaim her birthright, which was stolen from her by her evil younger brothers. The comic is an adventure full of swashbuckling, high seas, and a little lady romance.

Rosy: Raven: The Pirate Princess has a lot of brilliant female characters. And they are all different. It’s sad that people can’t see themselves in comics a lot of the time. I mean, it’s difficult to find anyone that draws someone like me! But people should be able to see themselves in the comics they read. Anyone can be a member of Raven’s crew.