It’s my favorite time of the month: the time when I get to wax poetic about how amazing Star Wars is and all the cool things the comics are doing nowadays.  Before that, I do want to point out something to you, dear reader.  There is a vast history of Star Wars comics, and a great deal of them are available digitally from Marvel and Marvel Unlimited.  Yeah, there’s the whole issue about canon vs legends universe, but, you know what?  A great comic is a great comic.  I was reading the Thrawn trilogy graphic novel adaptation and nearly cried at one point out of sheer joy.  *shrug*  If you are digging the Star Wars universe presented in the comics, give the older series a try.

Ok, now let’s get into the current stuff. 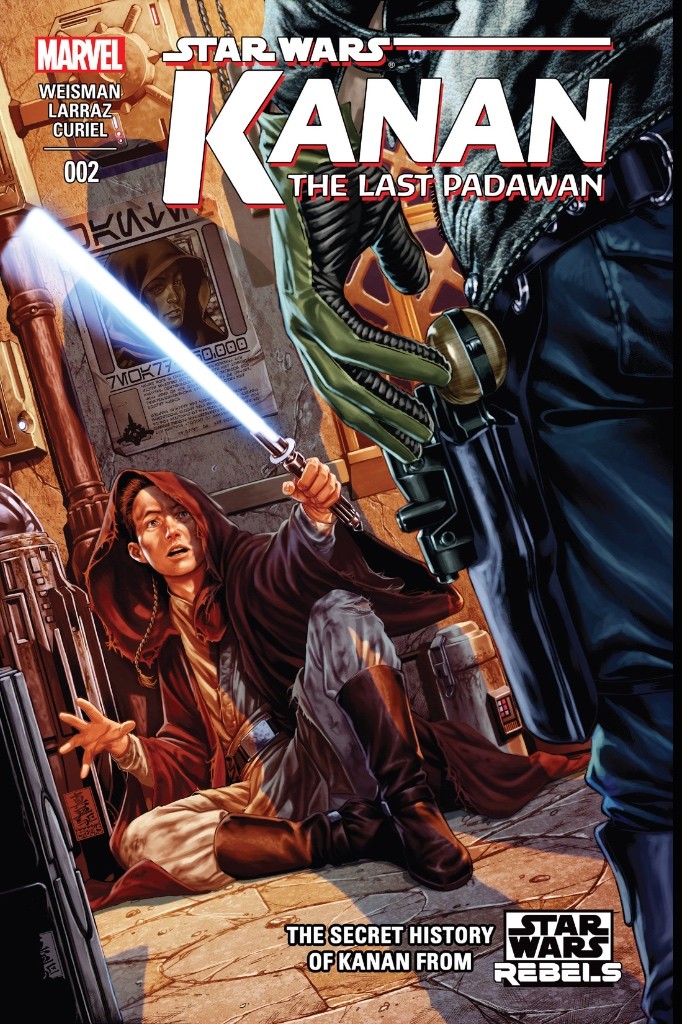 Caleb Dume seemed to have his life in line.  His Master, Depa Billaba, respected him and his strength enough to take him on the battlefield.  He was learning, growing in the Force.  And, with the holocron, was given permission to further study the way of the Jedi.

Then Order 66 is executed.

For Caleb, no good thing lasts forever.  The peace he found in his young life is short-lived.  The clones he considered his allies suddenly and mysteriously turn on him and Billaba.  Caleb is young, and I believe his reaction to the unforeseen slaughter is important.  While Billaba dives into action, Caleb is stunned into paralysis.  He cannot think beyond the connection he has to the clones, the people they are.  The way of the Jedi is lonely, and there is an emphasis on leaving personal relationships behind in favor of protecting the greater universe.  Caleb is young during this attack, and his outlook on life in general at this time will later influence his life as an adult and his dedication to the destruction of the Empire in Star Wars: Rebels. 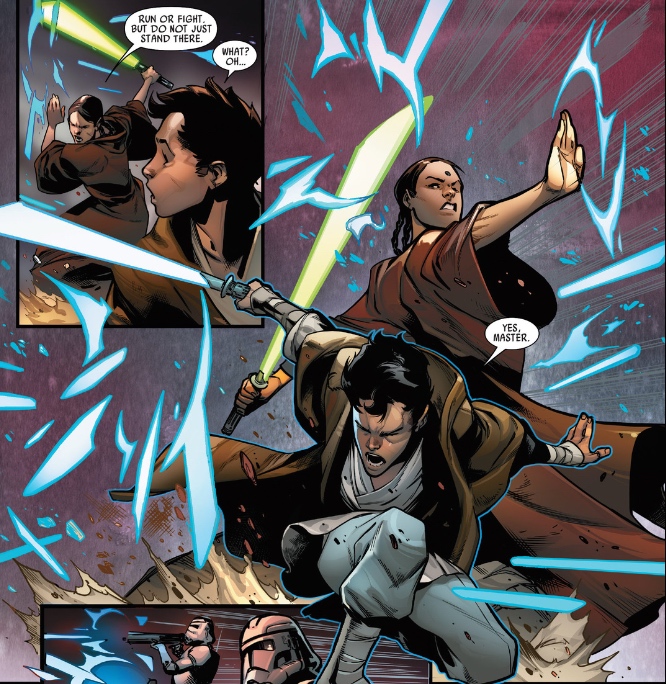 Among those personal relationships Caleb forms is the one with Billaba.  We all know it’s coming; the Star Wars story requires that the Jedi are all but decimated at this point.  Billaba’s death is important, and not for the obvious reason.  Sure, the death of this influential woman is key to Caleb’s fight for survival.  Seeing the woman he looked up to as a child killed in front of his face is motivation enough for survival.  However, her appearance in the first issue and subsequent death in issue #2 is not an example of fridging; rather, it is evidence of the traitorous nature of the rising Empire and how even the most powerful individuals could be taken down by sneaky tactics.  Her death was not surprising, but the impact her short appearance had on us as readers is testament to the skilled writing Weisman brings to this series. 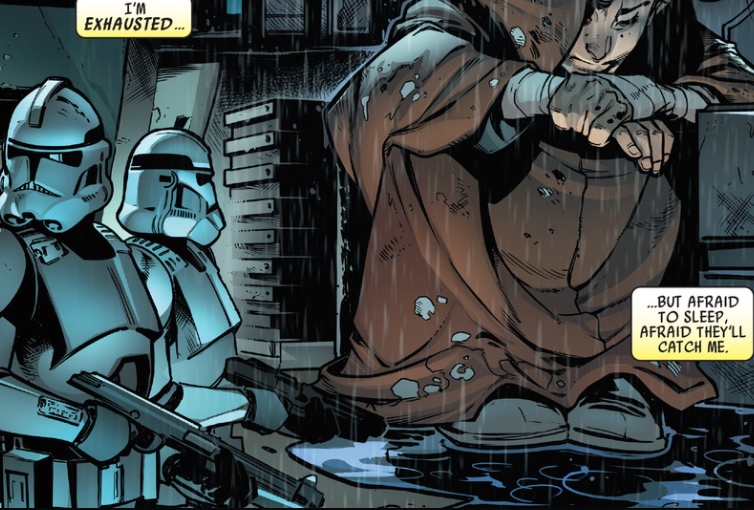 Along and afraid, Caleb must learn to make it in a harsh, cold world.  He can trust no one, and he lives in constant terror of being discovered by the troopers he once called friends.  What then follows is an interesting commentary on the Jedi way of doing things.  Caleb reflects that he was never on his own.  He went from his parents’ home to the Temple to the war.  His training was highly specialized, but it never involved the act of surviving on his own.  In a way, Caleb was incredibly sheltered, only experiencing the world through his “religion”, the Force.  If Order 66 never happened, Caleb would have theoretically led  a happy and long life.  Unfortunately, Caleb’s world came crashing down on him quickly and he had no real-world training to fall back on. 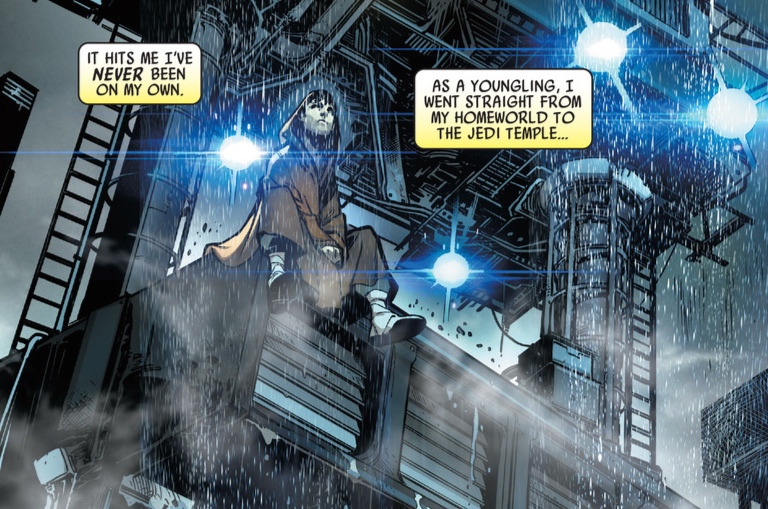 But, Caleb Dume is a crafty bastard, as evidenced by the man he grows up to become.  His methods may be less-than-moral, but he is determined to live. 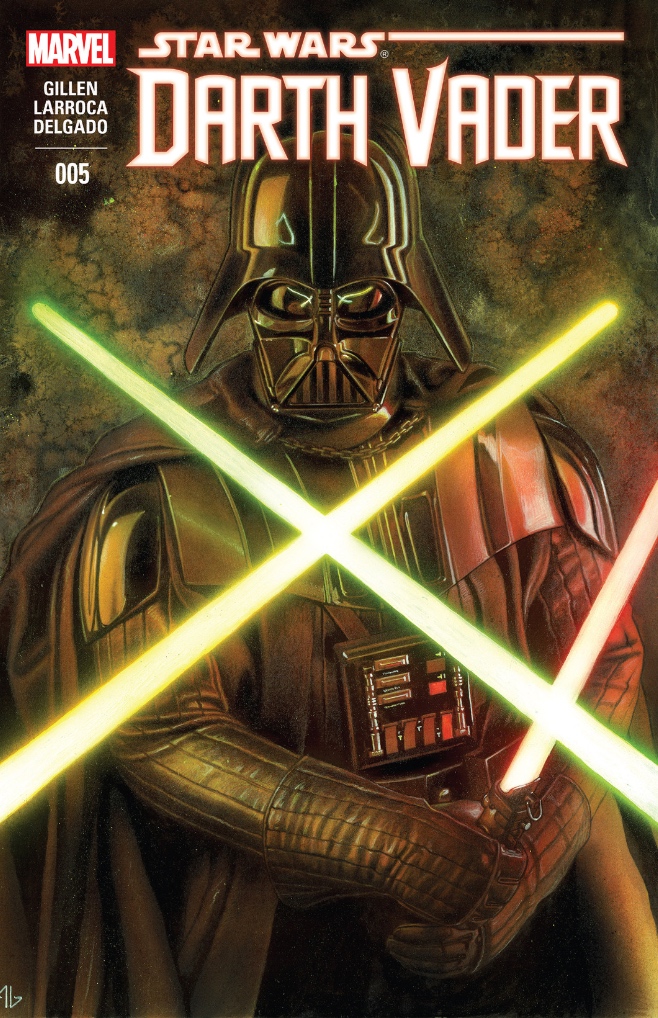 I did not expect Vader’s solo series to be so infused with action/adventure, but here we are.  And I love it.  So, Vader and Aphra are heading to the base of Cylo-IV, the cyborg-like man who the Emperor had on the payroll.  Vader knows he’s walking on thin ice, what with the destruction of the incredibly expensive Death Star and the failure to secure the Force-strong pilot.  Cylo-IV posed a threat, or, he did until Triple-Zero did what he did best.

You know who is not frightening?  Dr. Aphra, who steals every scene she is in.  This woman is just downright excited to still be alive in Vader’s presence, and she is living. it. up.  I’m starting to think she was born for this job. 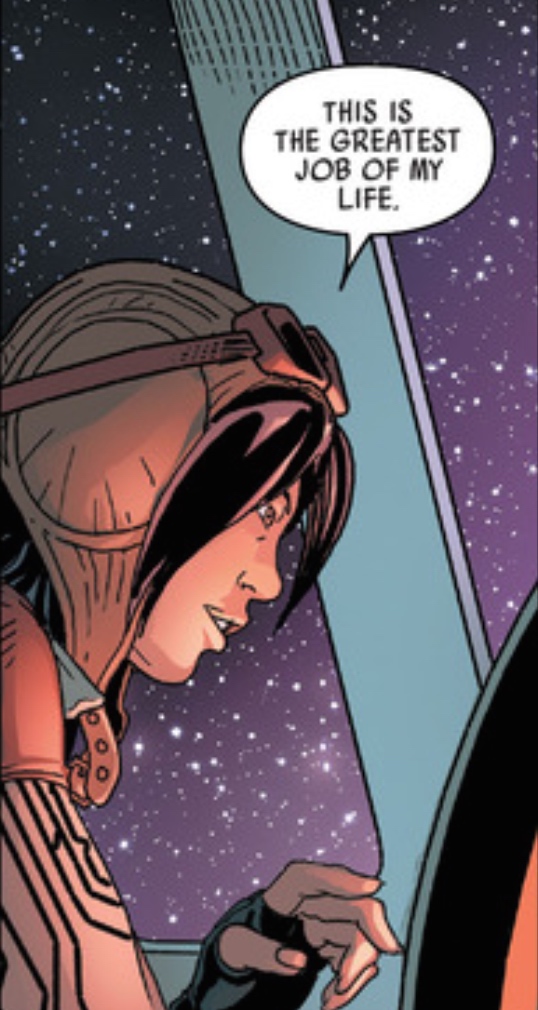 What waits on this base isn’t what Vader expected.  In fact, I’m not sure he went into this base with any type of expectation.  Force-strong individuals with ligthsaber training?  Cylo-V?  Lengthy explanations?  Yeah, it’s all crazy.

While this may not be the strongest Darth Vader issue to hit stands, it still continues in the same vein as the previous four issues.  There is humor, gritty darkness, and bombastic fight scenes.  I’m willing to see where the rest of this series goes. 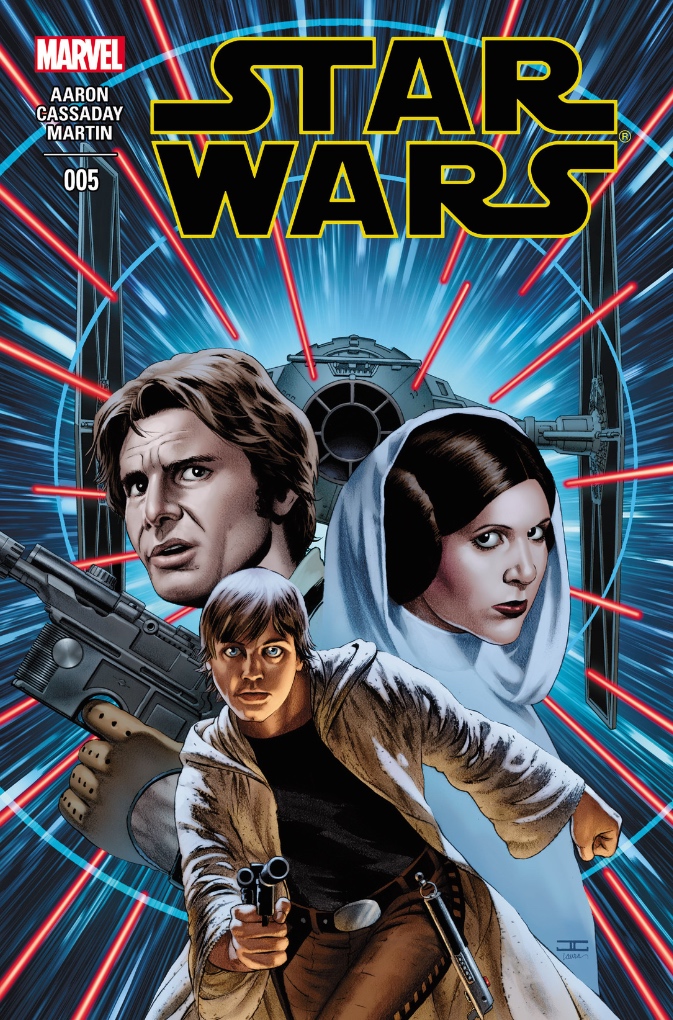 After Luke’s brief pity party in issue #4, he heads out to his homeworld of Tatooine.  “There’s nothing here for me now”, reflects Luke.  Typically teenage attitude.  Always dismissing the value of home.

Why Luke tries to figure out what he overlooked, Boba Fett is busting kneecaps trying to find out Luke’s name.   It’s pure entertainment, especially considering how little screen time Fett gets in the movies.  Let’s pretend for a second that the entire Legends universe doesn’t exist.  If this is the first encounter with Fett post- original trilogy, then I am OK with that.  Fett comes across as ruthless and menacing, and that’s how I like my bounty hunters.

Meanwhile, Han is being a flirtatious scumbag.  Seriously, you can tell he wants to be with Leia in nearly every panel they share.  She’s got a much better poker face, though.  Their relationship reminds me of those kids in elementary school who poke fun at girls and the teachers just say that the boys have crushes and can’t express themselves properly.   First off, someone should teach those boys some manners.  Second, Han has the mindset of a child when it comes to Leia.  Underhand comments and a grandiose attitude will only get him so far.  I’m really looking forward to the come-to-Jesus talk Leia is going to have with him when he crosses the line.

Which could actually be in this issue when she makes him her co-pilot.  Props to Leia for taking Han down a notch when he gets way too full of himself.  The pair attempt to disguise themselves as an Imperial ship, but their approach to sneaking and smuggling are vastly different.  Y’all know that I am 100% here for the romantic buildup between these two leading up to Empire Strikes Back.  Oh, gosh, the sexual tension!  I can barely stand it!

That’s it for this month’s roundup!  I’m a *little* upset a new Leia didn’t come out this week, but I’ll live.  Lords of the Sith, a novel, came out late April and is worth checking out, especially those of you who watched Clone Wars and are somewhat familiar with Twi’leks.