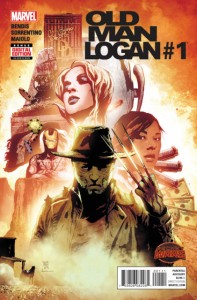 Old Man Logan #1 is a brutal, enthralling spin-off of Mark Millar and Steve McNiven’s brutal Wolverine: Old Man Logan and Jonathan Hickman’s enthralling Secret Wars. In many ways, Brian Michael Bendis and Andrea Sorrentino are able to capture the strengths of both origin points, particularly in their ability to continue the narrative of the former while working in the larger world of the latter.

Secret Wars is an all-encompassing event and the parameters of Hickman’s Battleworld are becoming clearer and clearer each week. Say what you will about the main Secret Wars series, but some of the coolest, most bats**t crazy stories are coming (back) to the spin-off books. Last week’s A-Force and Master of Kung Fu were equal parts idiosyncratic, off-the-wall storytelling and “tie-in” material, and Bendis and Sorrentino’s Old Man Logan is yet another example of the potential of the Battleworld concept.

For those that haven’t read Millar and McNiven’s acclaimed 2009 run on Wolverine that told the “Old Man Logan” story, it’s definitely worth a read. When a character as well-worn as Wolverine was growing a bit stellar and over-exposed, Millar and McNiven gave readers a fresh, engaging, and wildly imaginative dystopian sci-fi epic. Set 50 years “in the future,” Logan was presented as a pacifist family man resigned to leaving a subservient life in the barren wasteland of a world where the heroes lost long ago. The reasons why Logan sheathed the claws were slowly revealed over the course of the original story arc, and Millar and McNiven brought in a sense of brutality and finality as they explored “alternate” versions of Hawkeye, Emma Frost, Dr. Doom, Red Skull, “Spider-Girl,” and the Hulk. Definitely worth checking out!

As for Bendis and Sorrentino’s Old Man Logan #1, let me start by saying this new series is very accessible to new readers, particularly those readers perhaps unfamiliar with the original Old Man Logan story. After a concise, effective recap page right inside the cover, Bendis drops us into a sketchy, filthy game of poker in a sketchy, run-down Las Vegas in media res. Presided over by the Gladiator (a Mad Max-esque tattooed gangleader sporting an Iron Man mask), the game is interrupted by our titular hero and the first issue quickly devolves into one of the most brutal, well-choreographed, well-illustrated brawls in comics this year. 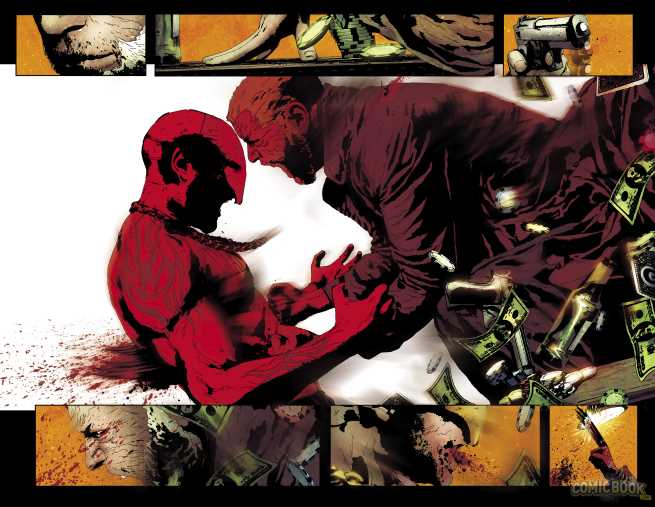 Andrea Sorrentino’s gritty, grungy, pulpy aesthetic is very different from McNiven’s clean, expansive cinematic lines, but in many ways it is much, much better for the tone and tenor of the book. The seven pages of the fight are brilliantly drawn and staged, and the efficacy of Sorrentino’s style is made all the more apparent when the scene segues immediately into a quiet, philosophical, terrifying sequence in which the victims of the Gladiator come face to face with a bloodied Logan. Sorrentino’s versatility is astounding, from the aforementioned fight choreography to the quieter, meditative scenes to the widescreen “Old West” backgrounds. Marcelo Maiolo’s color palette also deserves praise for its wonderful mix of soft, warm pastels and solid, aggressive red splashes.

Bendis takes the story from that violent, distressing scene in Las Vegas back to Logan’s home. Number one: Logan rides a horse, which is awesome. Number two: we get a supporting character that is a spectacular bit of legacy that put a smile on my face. Number three: something really weird happens that kickstarts the ongoing story here that ultimately segues into Secret Wars at the very, very end. A lot happens in this first issue, and while Bendis has a lot of pages to work with, he wisely chooses to eschew his more standard verbosity and play more with silence, scope, and Sorrentino’s visual magic. Still, this is a dense first issue, and one that is very, very true to the character of Old Man Logan.

BUY. Even if this wasn’t a Secret Wars tie-in, I would want to read this book. Bendis and Sorrentino are the perfect team to carry on the Old Man Logan concept, with its pulpy, gritty ethos and character-driven storytelling. Ultimately, Secret Wars has a very small role here in the first issue, but it does feel like it will play more of an impact going forward. So, regardless of how you feel about the larger event, at the very least this first issue is a straight Old Man Logan story that deserves to be read!!! Check it!

PS – Just as one final thought: it was kinda cool to see Logan again. I know he’s been ::spoilers:: DEAD for like almost a year now, but I guess distance does make the heart grow fonder.