Princeless Month continues with the second part of our interview with Princeless writer and creator Jeremy Whitley.

Where is Raven at in the beginning of this new series?

For anybody who has read the volume of Princeless that she’s in, at the end she and Adrienne manage to steal a ship and it becomes a question of: “Well, how am I going to go out on the sea and seek revenge against my brothers for doing all these terrible things to me if I don’t have a crew to run the ship?”

What can you tell us about the rest of Raven’s crew?

She decides to try and recruit some people and she has an interesting experience, specifically in issue 2 of the series. What she ends up with is a very diverse crew of women. And it was a big thing for me. I created the main five or six characters that are a major part of the first arc and they are sort of the core part of the crew. They’re all very different. When I handed it off to Rosy and Ted to illustrate they said: “Alright, well you said there was the rest of the crew. How many people is that?” and I said: “How many people does it take to run a ship?” [laughs] I know that’s probably a question that I should probably know the answer to at the point I was writing a book about pirates but at the time I hadn’t really thought about it. So they looked into it and said: “Well, there should be about this many characters… What do you want us to make them to look like?” I just said that I wanted the most diverse group of people as possible.

I want different heights, different sizes, different body shapes. I wanted them all to be unique. I don’t want there to be two characters that if I put them in the background of a scene, people could easily mistake one for the other. I think there’s a tendency to do that even with major characters in a lot of big comic franchises. Like, there’s somebody who pointed out that, in the pre-New 52 universe there were a lot of plucky blonde women in their 20’s who, if they weren’t wearing their costumes, they’d look the same. That wasn’t what I wanted the crew to look like so they [Rosy and Ted] put together a whole crew for me and sent me the image and asked me what I thought. I was like, “These are AMAZING and I’m going to name them all and give them stories.” So, I did.

I just sent them the scripts that I finished for the second arc of the story (issues 5-8) and I told them it was totally their fault that there are five characters in every panel because I decided to work in all the characters that they created for me. They all have something to do, they’re all going places. They divide up into groups to do things. They’re really incredible. I can’t wait for people to see what we have in store as far as the characters in the story. I think it’s going to be really great.

You’ll get to see the core cast that gets assembled in the first three issues and you’ll see that there’s a very different look to everybody.

The crew looks incredible! Obviously, you’re approaching this much differently writing-wise than with Princeless. Whereas Adrienne and Bedelia (and Sparky!) have their smaller group, Raven’s crew is much larger. Did have an idea that this would be such a different approach going into it?

To some extent, yes, but also no. When I laid out Raven’s story initially, it was very straightforward. In fact, the creative director at Action Lab was commenting that it had the same kind of format as Princeless. With Adrienne’s story, there’s linear in plot progression in that each volume focuses on her rescuing one of her sisters. With Raven it was originally laid out with her assembling her crew and going out to go beat up this brother and then she’ll beat up another brother and then we’ll figure out how to progress from there. But I’m eight issues in and she’s not really beating up either of her brothers yet. So that didn’t quite go the way I thought it was going to, largely because we filled out the cast so well and so interestingly that I want to get time for everybody.

I also want to get a chance in the near-future of this series to explore some of the Xing Tao family history. Because you learn a little bit from the Princeless books that Raven’s family have been pirates for a long time and most of the people in charge of the group have been female and they’re ancestors of hers so I’d like to take some issues here and there, when we’re trying to get caught up with the main story, to explore some of those characters. To get a feeling for what the Baroness Xing Tao was actually like.

That all sounds amazing! How are you liking the world-building aspect of writing? 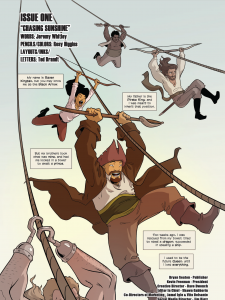 It’s nice because I really like world-building. I’ve had Adrienne’s world figured out for a while because with the set-up, I did a very traditional, fantasy RPG thing where each land she goes to is very distinct. There’s the plains level, the swamp level, then there’s the desert level and the mountain level. I had that laid out from the moment I sat down and figured out who all the sisters were, where they were, and what Adrienne had to go through to save them.

With Raven, I kind of let go because at the end of the Princeless volume, they’re in a distinct coastal town so I had to figure out where that was when I started writing her story and then where they were going from there. I had a nebulous sea area where things were so I had to map out the details. I introduced a new island in volume two and I didn’t even know what it was until I was writing the issue. It gives me a chance to be a little more free-flowing. I enjoy letting the characters go where they need to go and figure out what they need to figure out because a lot of the times when I write staunch outlines for things, I go back and think “No, that’s not right at all! That’s definitely not what this character would do at this point!” It’s easier for me to be able to go: “Oh, wait, I haven’t figured out what this was so I guess it will be this thing that I need it to be now and we’ll go from there.” 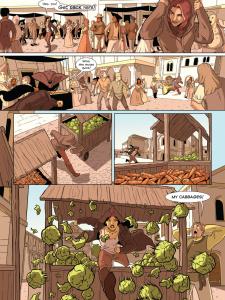 So in the preview we released, we got introduced to one of the new main characters… Can you tell us more about her?

Yeah! We get to meet Sunshine a little bit in the preview we posted online. Raven meets her when she [Sunshine] asks Raven for money, pretending to be poor and down on her luck. Raven decides to give her some money and then Sunshine steals the rest of it.

Physically, she’s sort of a match for Raven in that she’s a very tall half-elf so she’s very fast and nimble and very good at the jumping, climbing, and dodging, which she does a lot in that first issue. I wanted to give Raven a Raven, if that makes sense? In that volume of Princeless where she was introduced, [Raven] is very much the rogue of the group. She steals things and doesn’t think much of it. She’s the fun character to Adrienne’s law and order in that case. So she needs to be a little more law and order in this series because she’s the captain and has to run things. I had to give her a tougher character to handle.

A lot of the fight in Princeless is a little bit one-sided too. So it’s good to see Raven meet more of match!

You know Adrienne sticks in there all right but she’s out of her element with Raven. She’s used to being in armor and fighting people with swords. Raven is much more of an agile, hand-to-hand type fighter and you know, she’s good with the sword as well but she has more training than Adrienne does. She’s much more used to actually fighting than Adrienne is. Adrienne is good, just not very well trained. She’s getting better throughout the series too.

Check out the first part of the interview HERE

The first issue of Princeless: the Pirate Princess is still available so grab your copy while you still can!