The word “consequence” has many meanings and, since being taught the word in our adolescence, has always carried an enormous amount of weight with it. Whether that weight be the direct result or effect of an action or decision, being of importance or relevance, taking responsibility (i.e., accepting consequences), or even being of social distinction (i.e., a woman of consequence), the word holds a deep and heavy meaning that is often very tactile in our minds. I would like to explore how Marvel’s new small screen release, Daredevil embodies and lives in the bones of the word consequence.

A loud honking horn, the squealing of tires. A tired old man, stepping unaware of the world around, into the mad street of Hell’s Kitchen. An impending marriage of truck and body and then the leaping of a brave heart and determined young hands pushing the old to safety. A crash, a thud, a spilling of chemicals and a young hero crying out for his dad, “I can’t see! I can’t see!”

From the opening shot we see the consequence of Matt Murdock’s accident, not the action itself. We see that the consequence is blindness and learn later it caused an extreme heightening of his other senses. From the earliest understanding of the Matt Murdock/Daredevil story we are introduced to the tension between consequences. Had he not endured the fateful accident, Matt would not have gained his abilities. He probably would have had a much different worldview when coming into adulthood—he would be able to experience the world in all its color and vivid splendor. But, as tragedy goes, it happened. And there is nothing of kindness and rewinding to be found. Though he’s not able to appreciate the nuances of facial expression, he can detect the truth of words by the sound of a heartbeat. He can truly treasure the sound and weight of its voice, even if it be but a whispering thump. This tension, between what can and cannot be, not only works well as per storytelling but can easily cut straight to the heartstrings deep in our chests. One can’t help but wonder if the Man Without Fear can hear the song they are playing, and even more, if it is a song of beauty or a song of horror.

And while that song plays in our chest, it is fists striking and kicking blows that play the drums. 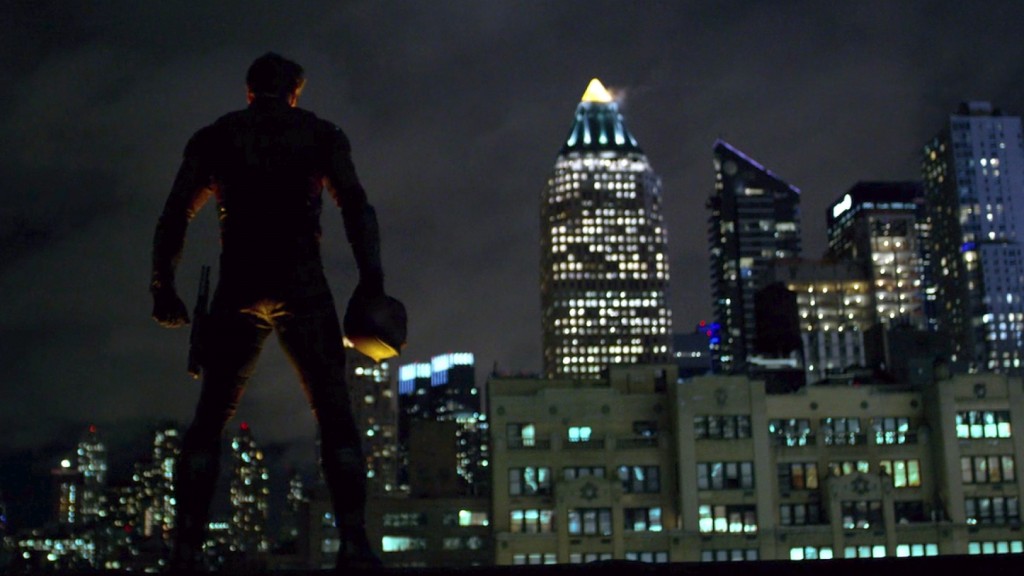 While, Matt Murdock, being referred to in legend as “The Mask” and “The Devil of Hell’s Kitchen,” has these incredible senses, he is still a man with all the weakness of man and all the limits of man. So when he steps into a hallway early on in the season and confronts the dozens of men waiting for him there, it is easy to wonder if our hero didn’t weigh the consequences of his actions. Or maybe he just didn’t understand the weight. Maybe he just needed that weight to slam his head into the floor a few times.

Pure exhaustion ensues both on the side of the hero and of the thugs when the fighting begins. Fists marry cheekbones, backs to walls, heads to doors and the hero always gets back up. Unfortunately, so do the thugs he throws through the walls. The fight scenes look as if each fighter is slogging through invisible mud; as if their bodies have gained an insurmountable amount of weight and are only packing on more as the fight continues. And that is the tension and literal consequence of action—any person who has ever physically worked themselves to their limit can understand that weight, that consequence.

We see our hero nearly fall and it’s terrifying. But when Matt rises, being the last one to endure the act of lifting his heavy, spent body from the floor, our hands might be shaking. We watch him walk jelly legged to the final door and disappear into the next room and this is where we hold our breath. Not because we fear for our hero, but because this is the moment when the testing of our hero’s measurement of consequence becomes real—was this all for naught or was it worth everything? So when our hero steps back into frame with a child in his arms we understand the weight of consequence—we understand that it was worth everything. We understand why Murdock’s keep getting back up.

This kind of meaning and significance is given to each fight, and those fights are not easily forgotten. The choreography is glorious and the cinematography is truly magnificent (Scene: Daredevil, escaping death, leaps from a ledge into a harbor and blood exploding from his wounds, highlighted by incredible lighting). But it is actually the injuries that persist in post that separates this show from any other. Cuts don’t heal in one episode, bruises fade over time and specific injuries bring the viewer back to past conflicts. Scars mean just as much to the viewer as they do to the character. This physical continuity acts as a constant reminder of consequence each time we see Matt Murdock step into the ring and prepare to fight.

And the battles spell more consequence than cuts and bruises. 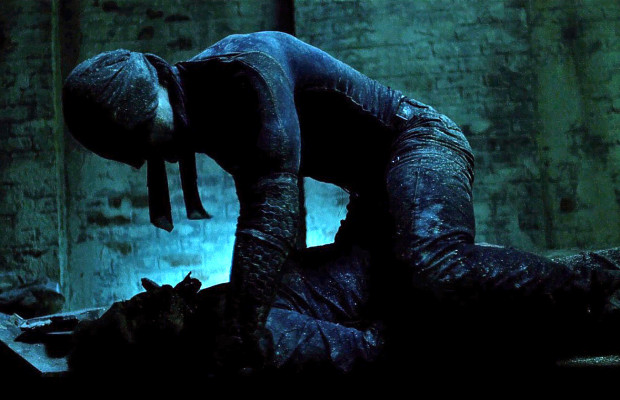 We see Matt struggle with questions of morality and justice—whether or not it is right or wrong to murder in specific cases. We see Matt wrestle with the “demon” coursing though his veins. What are the consequences of what he is doing in reference to his belief in God? He ponders the meaning of truth, justice and the true right—sometimes accepting he is doing none of the above because he has no other choice.

We see Wilson Fisk has the same and similar wrestling. There is a striking similarity of cause: they only wish to make their city better. It is their action and implementation that separates hero and villain. This all speaks to the ultimate consequence of their childhood tragedies.

A swing of a belt, the screaming of a mother, the tears of a battered child and the swing of a desperate hammer, followed by a rage of carnage and hatred.

That is the genesis of who Wilson Fisk becomes.

This contrast of origin is the tension between our hero and villain: the rage induced salvation of a mother by way of brutal murder and the self-sacrificing act of stepping in place of another when the truck is bearing down on them.

The consequence of their origin is this: the tragedy of Matt Murdock was born out of martyrdom and the tragedy of Wilson Fisk was born out of rage and hate. While Matt could not stop the truck, he did what he could to take the blow of it himself. While Wilson successfully stopped the truck that was his father and he saved himself and mother, he may have killed something much deeper within him, much more precious than sight. That tension of consequence gives life to both characters and allows them to dance along similar lines, causing the viewer to both agree and disagree with either character in moments of greatness and moments of darkness.

Matt and Wilson both decide to live deceitful lives—some may even argue they deceive themselves as well. Lies are always damaging to relationships, no matter the good intentions. In Marvel’s new show, we actually see the would-be villain, though vague, be truthful and honest with his would-be significant other about who he is. Through that, we see their relationship blossom. In Marvel’s new show, we also see the would-be hero living a lie to his best friend, Foggy, who, when learning the truth, is shattered. There is consequence to truth-telling and truth-withholding.

That’s the tension of Marvel’s Daredevil and it is glorious in its complexity. 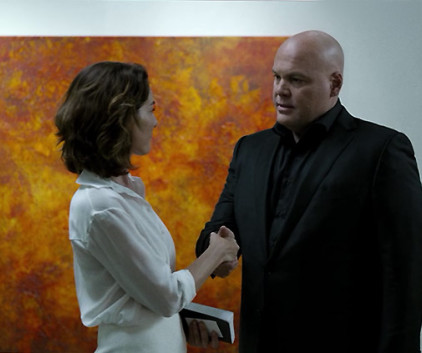 And now, every other superhero story in this medium and the next must answer to the choreography, the cinematography, the storytelling, the consequence of Marvel’s Daredevil.

1 a result or effect of an action or condition: many have been laid off from work as a consequence of the administration’s policies.

2 [ often with negative ] importance or relevance: the past is of no consequence| he didn’t say anything of great consequence.

PHRASES: in consequence as a result. take the consequences accept responsibility for the negative results of one’s action.