I love Star Wars.  I love nearly everything tied to Star Wars.

And I want to share that love with you in the form of obsessively going through the Star Wars comics each month.  I wrote one post that summarizes the events from January through March, and I’m bringing the column here to Talking Comics.  So, let’s roll up our sleeves and get started.  Spoilers beware.

April introduced us to a brand new series, Kanan The Last Padawan.  I’m going to be honest – I didn’t have a lot of excitement for this one.  But, once I finished watching Star Wars Rebels and read the first issue, I can say with confidence that I am all in for this series.

The premiere issue opens with a look at the crew of the Ghost as they prep for a seemingly minor mission.  Kanan goes into full-on flashback mode when Kaller is mentioned.

Enter young Caleb Dume, padawan of the renowned Jedi Master Depa Billaba.  Depa is portrayed as a wild card; there is a vague reference to something life-altering that she encountered.  How that will be explored and what it entails in the current Star Wars canon is left up in the air.

Caleb won’t lie; he’s loving the Clone Wars.  Fighting side-by-side with his Master and feeling purpose as a padawan gives this young teenager an intense high.

Larraz does incredible work with the battle sequences.  Each panel is full of intensity and grit while never losing the science-fiction flavor for which Star Wars is known.  In true Star Wars fashion, issues of morality quickly arise as the natives of Kaller blatantly state the presence of the Republic is no different than the occupation of the Separatists.

Favorite moment: This panel from the aftermath of the battle.

Caleb rushes to Depa’s defense, and he is quickly backed by the support of the Clone Troopers.  Depa ignores the slight and takes the opportunity to focus on Caleb’s training.

Caleb reveals his thoughts on the Clone Wars, questioning how he could feel at peace during a time of turmoil.  Depa reassures Caleb, but reminds him of the state of fluctuation the universe is always in.  As a Jedi, Caleb must be prepared to endure whatever challenges are thrown his way.  She warns against being rules by his emotions and trust in those around him at this moment.

Depa opens her thoughts concerning the Clone Wars with Caleb.  While Caleb feels at peace during this war, something weighs heavily on her mind: the role of the Jedi during war.  Should keepers of the peace resort to war?

Shocked, Caleb is stunned that a Jedi Master would ever question the decision of the Jedi Council.  Here, we see that Depa values Caleb’s inquisitive and questioning mind.  The clones, on the other hand, give him a brotherly hard time about it all.

We see the introduction of the Holocron, a device that Kanan carries with him today.  The gift is treated a rite of passage, a recognition that Caleb is to wrestle with some of these questions on his own.

And then, we see the most heartbreaking page ever.

Aphra, Vader, and the murder droids make their way to Geonosis in search of a droid factory.  This is a sensitive issue for Vader, obviously.  The last time he was on this planet, he was nearly killed.  The memory wouldn’t be nearly as painful without the added fact that this is where Padme finally confessed her love for him (I have thoughts on this particular scene, but this is neither the time or place to go into that).

Aphra continues to be one of the best new characters in Darth Vader, mainly because of her attitude towards the relationship between the two.  She realizes that association with Vader eventually ends in death, and she has decided nothing she can do will change that.  Luckily for her, she keeps her life as long as she is useful.  That, added with her predisposition towards war and chaos, makes her an ideal companion for Vader as he seeks to build his own army.

At times, in this issue, I wonder if Vader sees Aphra as more than a tool to advance his cause.  She doesn’t show fear in his presence like other subordinates, but she is not stupid.  It is hard to see what Vader feels because of his helmet, but we see Aphra look at Vader with a degree of adoration.  I’m definitely going to be rooting for that relationship to pan out, though I feel that it is essentially doomed to begin with.

Nothing is ever easy for Vader, and his new companions are quickly figuring that out.  Geonosis is a barren wasteland, and the droid factory is infested with a sterile queen looking to make her own twisted versions of children.

Triple-Zero gets a delightful surprise.  Remember that strange man from the first issue that was chilling with the Emperor?  Well, now he’s in Vader’s custody, and the responsibility for gathering information has fallen to Triple-Zero.  He is genuinely frightening, by the way.  What Triple-Zero discovers from this mystery man is of great importance to Vader and now dictates the direction of the story.

Four issues into this series, and I’m in love.  The story isn’t just doom and gloom; there are some rather humorous moments that remind me that Vader was once Anakin Skywalker.

Speaking of how awesome Vader was this week…we certainly got a double-dose of him this month.  Still reeling from the destruction of the weapons factory, Vader heads out to the Outer Rim to negotiate with everyone’s favorite Hutt.  It’s a battle for power for these two as Vader attempts to strong arm Jabba into a deal that ultimately benefits the Empire.  Seeing these two evil beings face-to-face again is so cool, especially since it calls back to their interaction in Darth Vader #1.  One of the best moments in this issue?  Seeing Jabba and Vader oversee the hunting of banthas while casually chatting about Kenobi and the young boy who destroyed the Death Star.

I love every interaction between Han and Chewie.  These two are so close, arguing like brothers rather than like friends.  Han is looking a little worse for the wear since he crashed the AT-AT.

Scratch that.  Since Vader cut it down with his laser sword.  ‘Scuse me.

Leia is calling for more action from the Rebellion.  She is not happy sitting and waiting for the ideal opportunity to strike.  She is all-too aware of the danger of the Empire, and her haste to attack is not shared by many.

Luke, meanwhile, is nursing psychological wounds from facing Vader.  His time with Kenobi was far too short, leaving him feeling lost in a sea of the Force.  This is an important moment, one that sets up just how important Yoda is to the growth of Luke as a Jedi.  Luke is actively yearning for his place and wrestling with the frustration of knowing too much and too little at the same time.

We’re introduced to a new character in this issue, a mysterious masked woman looking for Solo on Tatooine.  Yeah, this cannot be good.  We see Luke take off for Tatooine, presumably to investigate Kenobi’s place for any hidden information on the Force.  Oh, and an infamous bounty hunter is looking for Kenobi on Tatooine.  This issue is killing me! 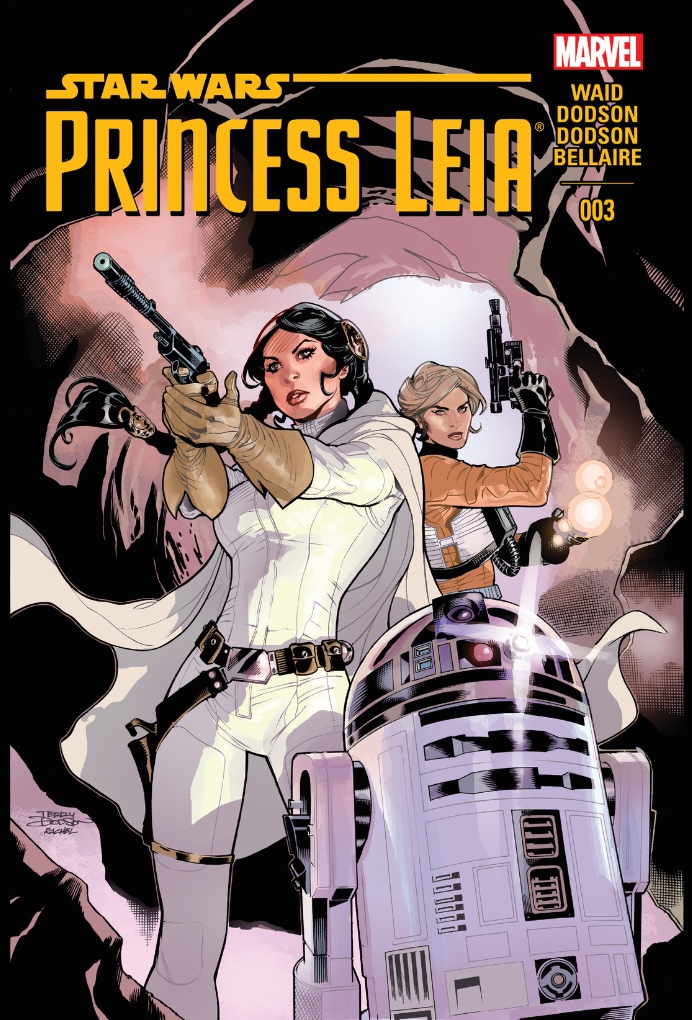 I need y’all to put a little pressure on Marvel to make this an ongoing series featuring rotating creators à la Sensation Comics Featuring Wonder Woman.  I’ve gotten a taste of how amazing Leia is in others’ hands, and I want more!

Leia and her ragtag team of orphaned Alderaanians are chasing down more Alderaanians, this time a group who are none-too-friendly.  What’s interesting about this exchange is their reaction to the danger Leia presents.  She fashions herself as a savior of her people whereas they regard her as the sole reason their home is destroyed.  Their initial adversity towards Leia makes Evaan’s more understandable.  Leia is so different, so set apart from the people she serves, that she is seen as an enemy rather than a princess. 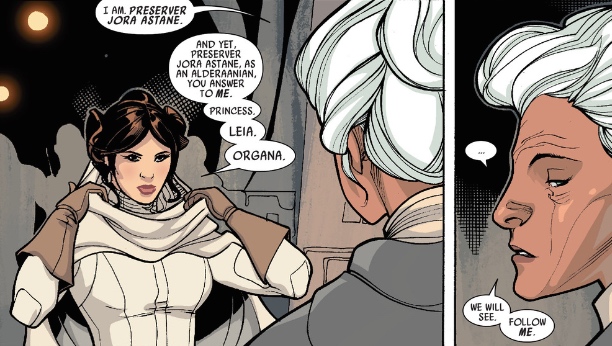 Leia’s plan to pull together the remaining Alderaanians together begins to seem like a poor plan.  The Preserver Jora Astane  picks apart Leia’s scheme, pointing out that gathering the last of a race together with the Empire’s most wanted woman is not a bright idea.  Leia ignores this slight to her plan and instead tries to convince Jora to trust her and her wishes.  She cannot blame them – they are acting in the only way they know how. 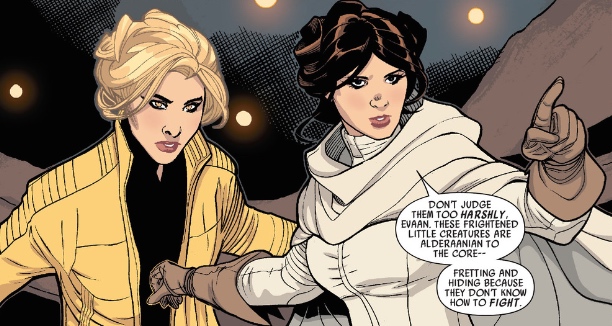 It doesn’t take long for the Empire to find the Alderaanians, especially with a little help from an innocent message between sisters.  It’s moments like these where Leia excels.  Under the stress of capture and death, she acts like the royalty she was raised to be.  She dives right into the fray and works with her subjects to protect their base.

There is an incredibly poignant moment in the middle of the issue where Leia reflects on her position in the lives of the Alderaanians.  It was her desire to bring rebellion to life that killed her people, and her desire to save what’s left of her people that brought the Empire down on their backs.  Her choice of words is wonderful: she reflects on the role of hope in her life.  This immediately brings to mind the title of the fourth Star Wars movie, A New Hope, and the words she says in a hologram message: Help me Obi-Wan Kenobi.  You’re my only hope.  If we extend her guilt that is tied to hope, could it be possible that she blame herself for Ben’s death just as much as Luke does?  Only time will tell.