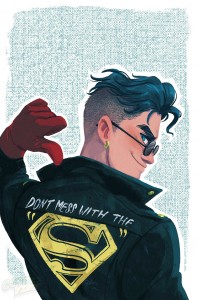 I got into comics in the mid to late 90’s, reading issues my cousin left behind after he left for college. Picking up this Convergence tie-in took me right back to that time but whether or not that’s a good thing has yet to be seen.

Kon-El was introduced in the aftermath of Superman’s death at the hands of Doomsday. With his faded hair, pierced ear, and leather jacket, Kon-El burst onto the scene with his infamous catch phrase: “HEY! Don’t ever call me Superboy!” His perpetual hot-headed teenaged attitude didn’t help him get rid of the moniker and after a personal loss, he grew up a bit and accepted the name with pride. As excited as I was to see this version of Superboy back, Nicieza’s take on the character left me pretty disappointed. Although I fell in love with the character when he was first introduced, reading this issue made me realize I fell even harder for the character he became later on.

This version of Kon-El never got to see the return of his “older cousin” Superman. He was rendered powerless by the dome just as Metropolis began to accept him as a replacement. This Superboy had enough trouble being a kid with god-like powers. Being a kid without them is even more difficult for someone with an ego like his own. Although I’m not a fan of the plot, Nicieza does handle narrative well enough. Instead of Superboy narrating the events, we’re reading it through Dubbilex’s perspective. With Kon-El’s state of mind during this time, I think his narrative might have weighed too much on the whiny, teen angst side of things while Dubbilex manages to provide a more objective point of view. This is equally problematic though, as this reference to that certain point in Superboy/Superman history makes the issue less accessible to new readers. Unfortunately, most of the Convergence tie-ins share the same problem.

The art by Karl Moline and Jose Marzan Jr. is inconsistent at best. Some of the close-ups on Kon-El’s faces are so different from each other that it almost seems like they’re not the same person. The action sequences are lacking too, looking far more static than they should. With 90’s Metropolis and Kingdom Come characters mixed together, I wanted to see more innovation in the art style and layout. Unfortunately mostly everything is thus far subpar. The cover art by Babs Tarr almost makes this issue worth it though.

Verdict: Pass. Although I’m sticking with this title, it’s not exactly new reader friendly and that’s really unfortunate given how much I love Kon-El. This tie-in is steeped in a pocket universe of history that never allowed Superboy to grow. The characters are equally reliant on that history to make this an interesting story. The art doesn’t capture the nostalgia of the 90’s, nor does it try to adapt to more modern, innovative styles of recent years. Given the other material it’s based on (Kingdom Come), I suppose I just had higher expectations. I really hope that DC gives this character another chance somewhere down the line because this Convergence tie-in is not the best way to bring him back.