Well it is here. This is one Valiant title I have been looking forward to reading, but had remained relatively skeptical. For starters Jeff Lemire is writing Bloodshot Reborn, and he is one of my favorite writers. On the other hand it is a Bloodshot book. 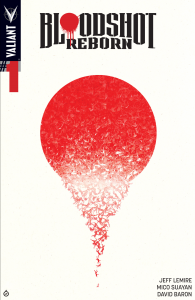 The previous series, Bloodshot, was not high on my list of Valiant titles. I enjoyed it for the most part, but if I had not been invested in the Valiant universe as a whole, I probably would have dropped it. It picked up towards the end of its twenty-five issue run, but I did not feel it was anything spectacular. The problem with Bloodshot was I never really saw him as a character with much depth. There was room for it, but it was not the way he had been written.

What Lemire has done in this first issue of Bloodshot Reborn (and in The Valiant) has been huge for the Bloodshot character, now going by Ray Garrison. Lemire has delved into the inner psyche of the character and is exploring Bloodshot from the inside out. This has made Bloodshot into a more sympathetic character. Sure, his situation with PRS lent him to be sympathetic in the past, but those stories basically told us we should be sympathizing. Lemire and Suayan did not tell us, but they showed us.

The inner monologue and tortured thoughts over the countless lives Bloodshot has taken haunt the character to his core. He was freed from the nanites that gave him abilities beyond that of a simple soldier, but he still has potential and purpose. This potential is what Kay McHenry, the Geomancer, saw in him before she died. We can see and feel the pain Bloodshot is in, and we want to cheer him on to be the best he can be. After one issue I feel more invested in the character than I did over an entire twenty-five issue run, so I think that is testament unto to itself on the quality of writing brought by Lemire.

Mico Suayan’s art and David Baron’s colors add to the inner struggle and pyschosis or Bloodshot. The level of detail that is paid by both artists is staggering. Suayan is able to capture all the emotional strife that is surging through Bloodshot, and you can see the pain in the man’s face. Baron’s colors highlight the necessary bits of memory and hallucination to draw the readers focus to the causes of Bloodshot’s turmoil. The art is really something truly awesome, and I hope the quality stays this way throughout Suayan’s tenure on the book.

Buy! If you listen to the Talking Valiant podcast you’ll know I’m not a huge fan of Bloodshot. Lemire brought much needed characterization to Bloodshot in The Valiant. Bloodshot Reborn #1 is what makes the character someone incredibly interesting, and a character I want to read more about. I’m truly impressed, and I am looking forward to the next issue.